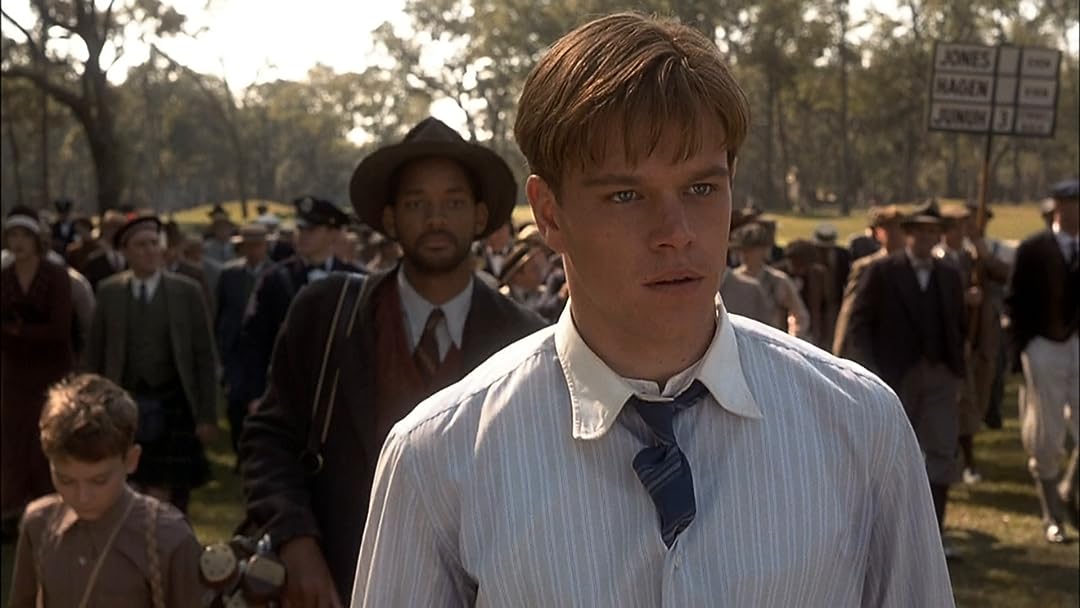 The Legend of Bagger Vance

(2,982)
6.72 h 6 min2000X-RayPG-13
A disillusioned war veteran plans to play in a golf tournament and must rely on his mystical caddy to teach him both the secret of the perfect stroke and the key to mastering any challenge in life.

ChaosMomReviewed in the United States on February 16, 2019
5.0 out of 5 stars
Mr. Smith Provides another wonderful performance!
Verified purchase
I hate to write reviews on movies, however, I have a thing or two to say about this one. First of all, this was an amazing performance by young master J. Michael Moncrief. I was extraordinarily impressed by this young man's acting! Mr. Will Smith was also at peak, but then again, when isn't he? Of course, the fact that Mr. Robert Redford was the director on this film brings it all together! Ms. Charlize Theiron was okay, she dropped the "Savannah" part of her accent more than a few times, as did Mr. Matt Damon, but that one's a hard one to hold onto! Especially if you weren't born to it! I'm not a fan of golf, and honestly couldn't care less about the game, it was Mr. Smith's acting that drew me in to watch "The Legend of Bagger Vance." I still couldn't give a gooses egg for golfing, but enjoyed this movie thoroughly. The cinematography was lush and vibrant, enough so that I felt engaged in every part of the film, from the horrific World War 1 scenes to the very end, when I was grinning ear to ear. In the end, of course, the movie wasn't about golf so much as finding oneself, learning to forgive oneself, and being able to move forward in your life. It was all very "Zen." I will be back to watch this movie again and again, since I've found it worth adding to my collection. I hope anyone who reads this review, will enjoy the movie as much as I have!
39 people found this helpful

S. E. AReviewed in the United States on May 29, 2018
5.0 out of 5 stars
Deeper Than You Know
Verified purchase
While a very low-key movie, the acting is riveting, and the deeper meaning of this story is a spiritual one. When I began researching the meaning of the movie, it lead me to learn something new; about the legend of Krishna who appears as Bhagavan (Bagger Vance) and Arjuna (the warrior) for which Junnah the character was named. Worth the watch because of the acting skills, and because of the underlying reality that formed the basis of the movie.
34 people found this helpful

Scott LangevinReviewed in the United States on June 9, 2020
5.0 out of 5 stars
The greatest movie about the greatest game!
Verified purchase
I first saw this movie some years ago. I'm that kinda person only to watch a movie once. Recently I have developed a passion for the game of golf. So I have been watching my fair share of golfing movies only to keep passing this one up. With no more golfing movies to watch i thought why not see it again after so many years.
With out any doubt I have to say, this is the greatest golf movie of all time! Honestly you dont even need to be a fan of golf to love this movie but if you are a fan it makes this movie just that much better!
Will Smith shines in this role as the guardian angel disguised as a caddy for troubled war veteran who has lost his swing.( Matt Damon) There are a lot of good actors in this movie and a must see for just about anyone who enjoys a good movie... Great movie!!

joel wingReviewed in the United States on April 28, 2021
3.0 out of 5 stars
Magical black man Will Smith saves white golfer Matt Damon
Verified purchase
The Legend of Bagger Vance is about a childhood dream of a local hero. When J. Michael Moncrief was a child his favorite golfer was Matt Damon. He lost himself during World War I and stopped playing until Moncrief pleaded with him to compete in a tournament to stand up for Savannah, Georgia. Will Smith shows up out of nowhere to show Damon how to play golf again. This has been termed “The magical negro” by Spike Lee when a black man appears and helps out white people like in stories such as The Green Mile and Bagger Vance. That’s literally what this entire movie is about. The good parts of the movie are actually the dreams of Moncrief and Charlize Theron who owns the golf course making some wisecracks. The golf isn’t bad either even though you know how it’s going to end.
3 people found this helpful

film fancierReviewed in the United States on August 18, 2016
4.0 out of 5 stars
How to play the game
Verified purchase
Set aside the use of a Hindu tale, an encounter Arjunu has with Krishna. Set aside the insertion of two real-life golfers in a three-way fictional golf match. What do you have? Yet another brilliantly told story of healing - a rising from the ashes of trauma and unbearable pain. Director Robert Redford has shown a particular skill for unfolding this kind of story in films such as Ordinary People and The Horse Whisperer, and he is in fine form with The Legend of Bagger Vance as well. Will Smith portrays a calm, pure, quietly loving God opposite Matt Damon's tormented, has-been golfer plagued by the agony of the part he played in the trenches of World War I. If that weren't enough to tempt someone to give this film a try, there are the supporting performances by Charlize Theron as the headstrong Southern Belle who is determined to preserve her late father's dream of a world-class golf course after the Depression threatens its tentative reality and J. Michael Moncrief, the young boy who loves golf more than anything and is determined to see Junuh (Damon) rise to reclaim that love as the local competitor in the upcoming golf match between Bobbie Jones and Walter Hagen. Redford takes on the directorial position in films based on such good books and then makes the stories come to life on the screen. This film is yet another triumph as a story of the most important kind of triumph in life. It is backed up by the integral music of Rachel Portman (Chocolat, The Cider House Rules) and presented with a light touch but not so light that it makes the telling trivial. And of course, it is lovely to have one last performance (albeit as narrator) from the great Jack Lemmon.
12 people found this helpful

C. S. SchofieldReviewed in the United States on May 24, 2019
3.0 out of 5 stars
Film saved by Will Smith
Verified purchase
If Redford had not been so in love with some of his shots, this would have been a much tighter film. That said, as a film about Golf, set between the World Wars, and with some fairly obvious morals, this would still be watchable, if you care for that sort of thing. What elevates it beyond that is the performance by Will Smith. His part is that of a (fairly obviously) Angelic Guide. It’s a kind of role that is easy to play badly. In the days of Classic Hollywood a smart director would put it in the hands of Spencer Tracy or Jimmy Stewart. That’s pretty high company, but Will Smith handles it with grace. I’ve been sorry to see his talents vitiated by poor script choices and/or bad cutting (Ali). He seems attracted to films I don’t care for, but anything he’s in I will at least give a look, and this film is why.
7 people found this helpful

Hoosier MomReviewed in the United States on February 17, 2020
5.0 out of 5 stars
Not just a golf movie
Verified purchase
This is a very good movie, underrated and over looked. I admit, I didn't watch it the 1st time I came upon it on satellite because I thought it was a movie about golf, and I am not a fan of golf. Instead, it is a great period piece--fantastic clothing and sets, and a heart warming story and message. It is actually one of my favorite movies, one most people haven't heard of, which is a shame. Will Smith, as always, is excellent and more low key than he usually plays. If you like golf, you will enjoy this movie, but definitely do not write it off if you are not a golfing fan--it goes way beyond the golf story.
4 people found this helpful

Amazon CustomerReviewed in the United States on May 4, 2018
5.0 out of 5 stars
A nearly perfect movie
Verified purchase
I'm not sure how you rate Bagger Vance less than 5 stars, unless maybe you're not a golf fan. It is very close to a perfect movie. I consider it a modern, "It's A Wonderful Life" with all the sweeping scope and emotion of that classic. Will Smith is spot on in every line and nuance. Matt Damon has a bit of struggle playing the down and out drunk because he's so darned likable, but he pulls it off. Charlize Theron has never looked more appealing. And Jack Lemon bookends the film. And all this with a majestic score as beautiful as the Savannah scenery. Truly a masterpiece because it's not just a movie, it's a portrait of life.
9 people found this helpful
See all reviews
Back to top
Get to Know Us
Make Money with Us
Amazon Payment Products
Let Us Help You
EnglishChoose a language for shopping. United StatesChoose a country/region for shopping.
© 1996-2021, Amazon.com, Inc. or its affiliates