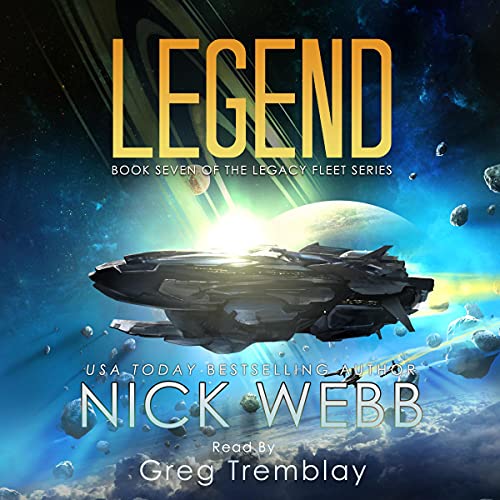 Nick Webb (Author, Publisher), Greg Tremblay (Narrator)
4.5 out of 5 stars 722 ratings
See all formats and editions
Sorry, there was a problem loading this page. Try again.

The Findiri, a savage, deadly race created to fight the Swarm, are on the hunt. But they no longer hunt the Swarm.

They hunt humans. And not just any human - they seek their creator, Captain Timothy Granger, and mean to destroy him.

But we are not alone. More alien races, hiding from the Swarm for millennia, also search for Earth, seeking the legend from their own stories to protect them: a being called Granger.

With Earth in the crosshairs, Granger, Admiral Proctor, and the crew of the Independence race against time to solve the mystery of the Findiri before all human and alien worlds fall.

But time is running out for all life in the galaxy, and the clock is ticking.

4.5 out of 5 stars
4.5 out of 5
722 global ratings
How are ratings calculated?
To calculate the overall star rating and percentage breakdown by star, we don’t use a simple average. Instead, our system considers things like how recent a review is and if the reviewer bought the item on Amazon. It also analyzes reviews to verify trustworthiness.
Top reviews

Jas PTop Contributor: Star Wars
VINE VOICE
5.0 out of 5 stars Easily one of the best books in the Series so far!!
Reviewed in the United States on October 7, 2021
Verified Purchase
With this being the 7th book in a series that has already delivered some of the most epic and incredible books, series, characters, races, combat scenes, space battles and more, Nick Webb had a lot to live up with this next book, and a lot of fans that were going to consume this in a heart-beat, myself being one of them.
I am very happy to say, that this book more than lives up to any expectations we might have had.
Webb has again, crafted this exceptional story, not only using the original characters, Proctor, who is just as brilliant as ever, Granger, who is not himself, having been almost reborn after nearly 13 billion years as a higher life form returning to primitive existence as a human, and of course other member of the original crew, Rana Scott, Zivic, Whitehorse, Qwerty etc each of them with their own distinct uniqueness (especially Rana – who you just have to love!!)
However, we have several new faces in this story, multiple new younger crew, brought forth to serve after the catastrophic losses from the previous swarm war. It makes for a really interesting, and fun mix of the older, experienced crew, hardened by a period of war, loss and comradery, and this new inexperienced crew, who are in awe of those who to them are ‘Legends’, but they now have to both work with, and fight with in a whole set of new problems that face the human race. These new crew have yet to fully finish their training either, having been forced to graduate early and complete ‘On the job training’ due to the huge losses from the Swarm War only months earlier that has left IDF suffering with losses of both people and ships.
Humanity is trying to come to terms with everything after the war, and the state of the galaxy, as well as trying to formalise relationships with other races, mainly due to Granger’s portent of doom that the Findiri are coming, and that they would bring the end of humanity with them.
With the end of the Swarm, Humanity has also discovered that there are other alien races that have been living not too far away from them (galactically speaking), but have been in hiding, and now wish to make contact, mainly with only one person, Granger.
Things only get worse for Humanity, when they discover that a Findiri fleet has actually reached the edge of human space, and destroyed a small colony (The description of this is incredibly well written, mesmerising, but also brutal and cruel, Webb does a masterful job of making you instantly hating the Findiri as pure Villains at the start of this book, but it makes you wonder if they actually are, or if there is something deeper going on with Granger). The Findiri only have two goals, find Granger, and destroy Humanity.
This is an intense and captivating story, once you start it, you won’t be able to put it down. There is a constant intrigue to the story, you just have to know what is going to happen next, this underlying mystery, and Webb is very clever at drip feeding you the pieces of the puzzle (and providing several bits to throw you off as well!!).
This is one of the areas that Webb really creates some of his best work in these books, using his characters, and his ability to create this stunning back drops, regardless of where the story takes us, Webb builds these extraordinary locations for us to visit, and get lost in, so that we can be completely immersed in the story. The world-building is stunning, the detail is incredible, you feel like you are on the bridge of the ship with Proctor, or in the cockpit with Zivic.
The Character work is just exceptional, with every part in this series, Nick Webb cements his place as one of the best Character Driven Mil Sci-Fi Authors on the market today, and Legend is another outstanding example of this.
Granger’s character is just superb, as the 13 billion year old Captain reincarnated having returned but without his memories of all he has done in his higher form, just knowing that he changed things, and knows things that have affected the galaxy, and possibly will affect it. Proctor is hilarious, as the cantankerous old Admiral, unwilling to bend to anyone who does not do what she wants, or doesn’t agree with her. Proctor is highly intelligent, has fought in both Swarm Wars, and knows more about the Swarm, than the actual Swarm do. Her Character is just brilliant.
One of the best characters in the previous books was ‘Ballsy’ who died in the last book, and left a big gap to be filled, but this has been picked up by his bat ship crazy son, Zivic, and he is just as funny as Ballsy and just as crazy (if not crazier).
The character work is one of the best parts of the book, and is so real and authentic.
This is easily one of the best parts of the Legacy Fleet series, and is a must read. If you have not got into this series, then now is the time. If you have, then you will love this new book, as it is just brilliant!!
Read more
One person found this helpful
Helpful
Report abuse

Louisville resident
5.0 out of 5 stars The Legend (aka Energizer Bunny) continues…
Reviewed in the United States on June 22, 2021
Verified Purchase
Well, you just can’t put Tim Granger down. Literally and figuratively. While I thought that maybe I had missed a book in between this book and the last I read, I began to fill in the chinks in my memory with elements from this book, and by the end, I was full on engaged. Pleasantly surprised that this is not the final installment. More adventure and intrigue to come! Can’t wait for September 2021 now, as this is the proposed release for the next Granger installment!
Read more
One person found this helpful
Helpful
Report abuse

Ircel Harrison
4.0 out of 5 stars Still a Good Read
Reviewed in the United States on September 17, 2021
Verified Purchase
Nick Webb is good at keeping us engaged by allowing the readers to follow the activities of different characters simultaneously and then bringing them together to further the storyline. Although this series has been around long enough to get rather complicated, I still enjoy it. Glad LEVIATHAN is already published so I can continue the story.
Read more
Helpful
Report abuse

Paul
5.0 out of 5 stars He is back
Reviewed in the United States on January 8, 2022
Verified Purchase
Granger returns with memory loss. He has a small part in the story but apparently he is god. Creating races and is as old as earth it’s self. Well he did it from his own dna so perhaps not got but god like. The Grangerites were right. There is plenty of action as the story grows more improbable.
Read more
Helpful
Report abuse

Kindle Customer
4.0 out of 5 stars Great book
Reviewed in the United States on June 23, 2021
Verified Purchase
Some times I'm a little slow going from one book and author to another. Most have their own styles which is great. But I had no problem moving on this book. I loved all of it. And I can't wait till the next book is available. Hurry up. Thank you
🙋
Read more
Helpful
Report abuse

Joe Palmer
4.0 out of 5 stars They are still alive
Reviewed in the United States on December 14, 2021
Verified Purchase
Battle after battle and many under viable at first but some how they stay alive. With so many battles I wondered if all were lost, but no there is another book to read to finally? Finish th series.
Read more
Helpful
Report abuse

Kenneth L. Pim
5.0 out of 5 stars Exciting
Reviewed in the United States on September 3, 2021
Verified Purchase
I do believe that this is the best series I have ever read, and I have read many intriguing and exciting series. I can’t wait to get the next and perhaps the last book in just eight days.
Read more
Helpful
Report abuse

Anita Rowland
5.0 out of 5 stars Non-stop action!
Reviewed in the United States on July 1, 2021
Verified Purchase
I am a huge fan of this series. The characters are well developed, and they continue to evolve as they face new dangers and challenges. The question of whether we are alone in the universe is considered in thought-provoking ways—and the answer is frightening! I definitely recommend the Legacy Fleet Series.
Read more
Helpful
Report abuse
See all reviews

NJ
3.0 out of 5 stars Disconnected
Reviewed in the United Kingdom on November 2, 2021
Verified Purchase
Too much happening everywhere. Some of the character threads are interesting while others just roll on from one war location to another. Basically felt like the whole book was waiting for Grainger to remember something and he still hasn't at the end.
Read more
Report abuse

David Herbert
5.0 out of 5 stars Great Storyline
Reviewed in the United Kingdom on June 28, 2021
Verified Purchase
Just finished this great storyline and looking forward to book 8.. Well worth 5 stars. There is some great characters old and new
Read more
Report abuse

Miketi
5.0 out of 5 stars Hard to put down
Reviewed in the United Kingdom on December 19, 2021
Verified Purchase
Nick Webb is the master of making you want to read another chapter, or order the next book in the series. What’s not to like?
Read more
Report abuse

dewboy
5.0 out of 5 stars Another exciting chapter in the Legend story
Reviewed in the United Kingdom on September 19, 2021
Verified Purchase
Could not put the book down, once started. A great story well written, if you like Sy Fy.
Read more
Report abuse

lee georgeson
5.0 out of 5 stars .
Reviewed in the United Kingdom on August 9, 2021
Verified Purchase
Love this book series
Read more
Report abuse
See all reviews
Back to top
Get to Know Us
Make Money with Us
Amazon Payment Products
Let Us Help You
EnglishChoose a language for shopping. United StatesChoose a country/region for shopping.
© 1996-2022, Amazon.com, Inc. or its affiliates