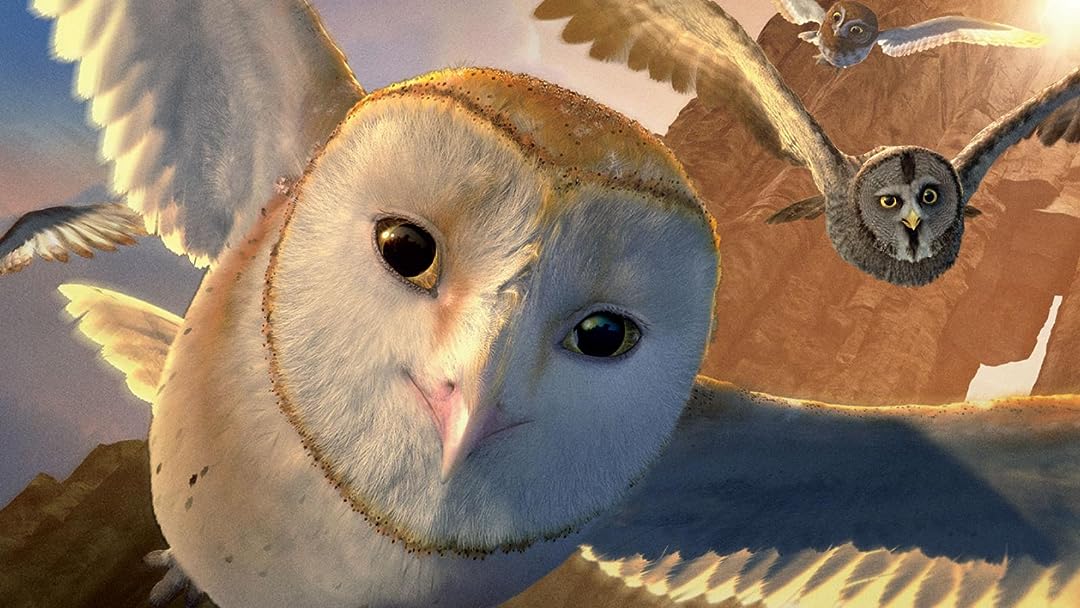 Legend Of The Guardians: The Owls Of Ga'Hoole

(4,721)
1 h 36 min2010X-RayPG
Soren, a young owl, falls into the clutches of the evil Pure Ones and must set out to find the legendary Guardians of Ga’Hoole - his only hope of saving the owl kingdoms.

LtTawnyMadisonReviewed in the United States on December 14, 2020
4.0 out of 5 stars
Best animation EVER, especially in 3D. Story is good, but better if you've read the books. Age 8+
Verified purchase
I saw this (as an adult) when it first came out, not having read the books. I'm a huge animation buff so of course I had to see it. As everyone knows and has said, the animation is truly stunning. It is BY FAR the most visually beautiful animated film out there (and I've seen almost all, including anime which I love). The one thing that matches it are the Pandora scenes in Avatar. It is worth watching for the visuals alone, and 3D pushes it to an even more amazing level. If you don't usually watch or buy 3D, this one would be the one I'd say to make an exception with.

As for the overall movie quality, I enjoyed it enough to buy it when it was first released, so it wasn't only the visuals that I liked. You can certainly watch it without having read any Ga'Hoole books, but it is more enjoyable if you have. My 12yo and I just finished reading the first 3 books (which are what the movie is loosely based on), because I like to have her read the books before seeing any film adaptation whenever possible. We enjoyed them and she was very eager to see the movie. It was easier to follow this time because of the familiarity with the characters and plot from the books.

The movie takes some big departures from the books, but we didn't mind the changes at all, and felt that some were an improvement, as they were more plausible. The author Kathryn Lasky was one of the Exec. Producers, so I assume that she was involved in the adaptation process. Even though it's apparently based on books 1-3, from the book descriptions it seems to me to be also based somewhat on 4-6 (which is when war takes place).

She watched it again the day after we saw it, and I predict more repeat viewings!

As for age appropriateness, I'd say 8 and up, as it is more serious and intense and doesn't have a cartoony or upbeat feel of most Disney movies but is definitely more action-adventure. But there are some good moments of humor thrown in, largely provided by the bard-warrior Twilight who, for example, sings a particularly funny lullaby.

Cliff from CliftonReviewed in the United States on December 9, 2018
5.0 out of 5 stars
The best photorealistic animation!!!
Verified purchase
The wind-struck feathers, the rain spinning in the vortex, the small details over the terrain. The smoke, water, fire and wind — EVERYTHING in this movie screams out at you when you see it in 3D. The plot might not be as fast moving and high action as other 3D movies, but the realism in this movie contributes its own attractions that is as good as, if not better than, any fast action and suspense in other movies. And the plot itself is very nicely thought out.
4 people found this helpful

gsxrReviewed in the United States on June 9, 2019
4.0 out of 5 stars
No Spoilers
Verified purchase
The story arc was good. Was it Cain vs Abel? or not? North vs South? Maybe. I watched the 3D Blu-Ray on a 3D television. The animation was crisp. The 3D was mostly in-screen and good, not much “coming at you” out of screen effects; the 3D and crisp animation did enhance the movie. The story moved a little slow at times, but picked up and overall was very good. Scenes of birds eating insects and hints of eating small animals, but I imagine the story is safe for children, at least 8 and up. Bird battle scenes, but not very intense. Not really a five star movie, but good for at least 3-4. The 3D and crisp animation make it a 4. Recommend getting the 3D Blu-Ray for the four. Streaming 2D might be just a three. Overall family friendly.

Clarke KentReviewed in the United States on July 19, 2022
3.0 out of 5 stars
Excellent 3D sharpness, color dynamics and audio. Best enjoyed if you have read the book(s).
Verified purchase
Outstanding 3D technical aspects. Cinematography is among the best. However the story is best enjoyed by those who have read the book(s). Otherwise you spend half your time trying to figure out who is who in the film. Somewhat disappointing otherwise. I was lost after the first 15 minutes in the story line. I did enjoy the quality 3D presentation.

brainoutReviewed in the United States on May 14, 2013
5.0 out of 5 stars
Happy, GREAT animation, worth rewatching
Verified purchase
I've watched this film maybe 10 times, before buying it. The animation is fantastic, extremely realistic. The first time watching, I had trouble with the Aussie accents; but with rewatching, could hear the lines better.

The DVD clarity is better on the same HD TV, versus the Comcast airings. Wow. Golly, I could watch this every day and not get bored.

There is a song in the middle of the film which serves as its theme that I don't like, but I just turn down the sound during that sequence. Next minus: it's a pain to use this DVD. You're stuck with a ton of previews you can't get out of (except to keep hitting the skip buttons), before you can even get to the DVD menu. Please someone, fix that annoyance, in future editions? In Windows 7, the DVD kept getting stuck (32-bit Windows 7, Dell 780). But that could be the computer. Seems to play just fine, in the DVD player and my Win 7 laptop. Third minus: the scene selections aren't titled.

There are two special DVD features: one, on the importance of owls in nature, very charming, roughly 15 minutes. The second special, is a short cartoon, 'The Fur of Flying', with our pal Wiley Coyote and Road Runner. It looks almost like 3D, on my Toshiba 1080p TV monitor.
6 people found this helpful

mark pipetReviewed in the United States on January 2, 2018
5.0 out of 5 stars
Great movie for little ones to older ones
Verified purchase
I've never read the books so I can't make a comparison review (some of those are pretty rough). We really enjoyed watching this one. We had ages 4, 6, 13 and 3 adults watching. Big bowls of popcorn always make it better too. It captured everyone's attention throughout theentire movie. We had to pause for folks to take breaks. No one wanted to miss a minute of it. The little ones laughed and laughed while we smiled and enjoyed the lines that went over the kid's heads. Great movie for all ages
5 people found this helpful

M. RReviewed in the United States on December 26, 2010
5.0 out of 5 stars
Ecellent movie for anyone really
Verified purchase
I found the Legend of the Guardians: The Owls of Ga'hoole to be a great film. It has everything jealousy ,betrayal, good vs. evil, some whimsical moments and some good story telling. Directed by Zack Snyder (300 & Watchmen and the upcoming Sucker Punch) yes that Zack Snyder. Don't let that put you off though this is not uber violent like the other movies he has done. At the same time this isn't just for kids, as other reviewers have noted may have some scenes that are a little "intense" for the under 7/8 crowd. Just don't expect some cutesy animated film, IMO this is a film that just happens to be animated.
I originally saw this in the theater in 3-D and it was awesome visually the 3-D in the theater was great one of the finest I've seen so far I had high hopes for the blu-ray and it doesn't disappoint. To say the blu-ray is visually stunning would be an understatement one of the finest looking blu's out there period. It is also available in blu-ray 3-D, I can't however say whether the 3-D blu-ray is worthwhile or not since I have a Front Projection set-up Panasonic PT-AE4000U 1080P with a Carada Criterion Series 120" 2.35:1 Screen.
The DTS-HD soundtrack is equally impressive as well. I won't bore you with another synopsis other reviewers have covered that quite well. I for one am looking forward to Zack Snyder doing more in this series.
2 people found this helpful

Robin Lynn FrankReviewed in the United States on December 14, 2012
4.0 out of 5 stars
Almost Perfect!
Verified purchase
I bought this movie because I'd seen reviews that it was visually stunning and was excellent in 3D. I was not disappointed. The plot isn't exactly new, good vs. evil, young hero facing overwhelming odds, etc. What saves the story is that you can identify with the characters and that the actors whose voices give life to them, are perfectly cast. The 3D is truly excellent, with no visible artifacts and some of the effects were truly wondrous. I'm no expert on animation, but can only describe it as awesome. Audio quality is excellent throughout the movie.

The only reason I didn't give 5 stars is that occasionally, the movie departs from it fairly dark plot, to remind you it is based on a children's story. That makes it feel uneven and can even jar you out of the mood that had been set. Maybe, it is just that I'm too old for kid's stories.

One final thing. There is one sequence where Soren embarks on a particularly dangerous task. The music that accompanies the scene is so very haunting and perfect for what is happening, it is impossible to forget it.
6 people found this helpful
See all reviews
Back to top
Get to Know Us
Make Money with Us
Amazon Payment Products
Let Us Help You
EnglishChoose a language for shopping. United StatesChoose a country/region for shopping.
© 1996-2022, Amazon.com, Inc. or its affiliates