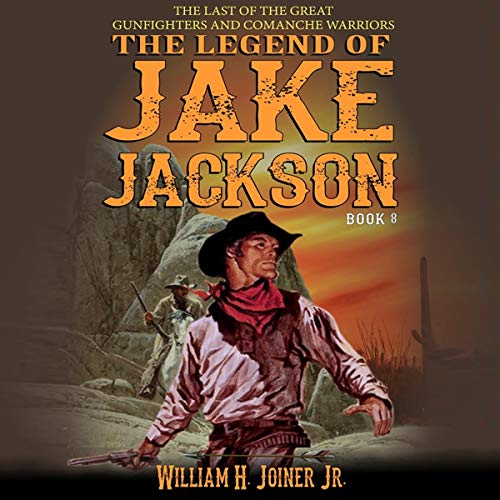 Jake Jackson is ready for trouble.…

The eighth book in this best-selling Western series from William H. Joiner, Jr. A fast-draw must fight for what’s right against the odds in The Legend of Jake Jackson.

Grab your copy today and start reading this exciting new Western adventure from the author of Morgan Porter, Angel Jacobs, and many other Western novels! Two extra bonus stories are included for your listening pleasure!

Enjoy a free audiobook + more
Learn more about Membership
List Price: $6.95
You Save: $0.87 (13%)
By completing your purchase, you agree to Audible’s Conditions Of Use
Sold and delivered by Audible, an Amazon company
Share

4.3 out of 5 stars
4.3 out of 5
90 global ratings
How are ratings calculated?
To calculate the overall star rating and percentage breakdown by star, we don’t use a simple average. Instead, our system considers things like how recent a review is and if the reviewer bought the item on Amazon. It also analyzes reviews to verify trustworthiness.
Top reviews

Kindle Customer
5.0 out of 5 stars An outstanding western masterpiece of Marshal Jake Jackson exploits followed by an excellent rendition of America's first female U. S. Marshal, Angel Jacobs. Then we are blessed with Marshal Morgan Porter, and his crew. The final kicker was enjoying Marshal Caleb Jacob and his outstanding exploits of taming the old western frontier! Cannot beat these outstanding western adventures!
Reviewed in the United States on July 18, 2020
Verified Purchase
Most definitely a quartet of five star western masterpieces by some of our most prolific writers of outstanding entertaining revelations of realistically motivated western folklore adventures. Never a dull moment throughout this compelling western folklore series of one exciting gunfight after the other. All of the authors did an exceptionally outstanding selection of their characters from beginning to end. I must advise you that these Authors don't writ stories for the week at heart, and if you don't like blood she, dear and destruction, then beware, as these guys, and gal, take no prisoners! Outstanding character, both good and bad, but the bad beware, as no prisoners are taken!
Definitely recommend these compassionately motivated stories to ever, but you dyed in the wool western folklore enthusiasts will definitely enjoy how these guys, and gal, take no prisoners, as the work for Federal Judge Parker, and he is a no nonsense Jurist. Saves time in his Court room! Fast moving adventures that keeps your undivided attention from the very first line until the last paragraph has been read. Start reading early as you will be unable to put this outstanding series of unending excitement aside until the final paragraph has been read! Try it!! You'll love it!!😄
Read more
One person found this helpful
Helpful
Report abuse

JTS
1.0 out of 5 stars Won't buy anymore books by this author.
Reviewed in the United States on July 5, 2020
Verified Purchase
Basically a short story about Jake Jackson while the rest of the book is about different characters including at least 1 story which was in a previous book. I definitely will not purchase anymore books written by the author. It wouldn't even bother me if it was mentioned it included stories about characters from different story lines before I purchased it.
Read more
Helpful
Report abuse

Linda A. Holifield
5.0 out of 5 stars Jake Jackson, a true hero!!!!
Reviewed in the United States on June 29, 2020
I love all the Jake Jackson books! This particular book has two stories under the same heading ,Jake Jackson, book 8 and Angel Jacobs, book 3.
It was really a toss-up to see which book I would read first. Jake won! Jake has a deep undercover alias known as White Wolf. I love to see him in action. He is a a "Take no prisoners", kind of Indian.

Angel Jacobs, book 3, is a real page-turner. Angel turns up in situations where she can't possibly win. It is entertaining to watch what she does next!
Read more
One person found this helpful
Helpful
Report abuse

Kindle Customer
3.0 out of 5 stars Not a complete book about Jake Jackson.
Reviewed in the United States on July 16, 2020
Did not understand this book. The first of the book was about Jake Jackson and then it was different stories not about Jake Jackson. When I buy a book I expect it to be about the guy it is advertised to be.
Read more
Helpful
Report abuse

David Smith
5.0 out of 5 stars Awesome Read!
Reviewed in the United States on June 26, 2020
These Jake Jackson books keep getting better and better. I was sad when I finished it. Be sure to read the rest of the Jake Jackson books!
Read more
One person found this helpful
Helpful
Report abuse

Amazon Customer
1.0 out of 5 stars not worth the money at half the price
Reviewed in Canada on January 19, 2021
Verified Purchase
i do not call these books novels more like very short stories 50 to 60 pages will not buy any more
Read more
Report abuse
See all reviews
Back to top
Get to Know Us
Make Money with Us
Amazon Payment Products
Let Us Help You
EnglishChoose a language for shopping. United StatesChoose a country/region for shopping.
© 1996-2022, Amazon.com, Inc. or its affiliates