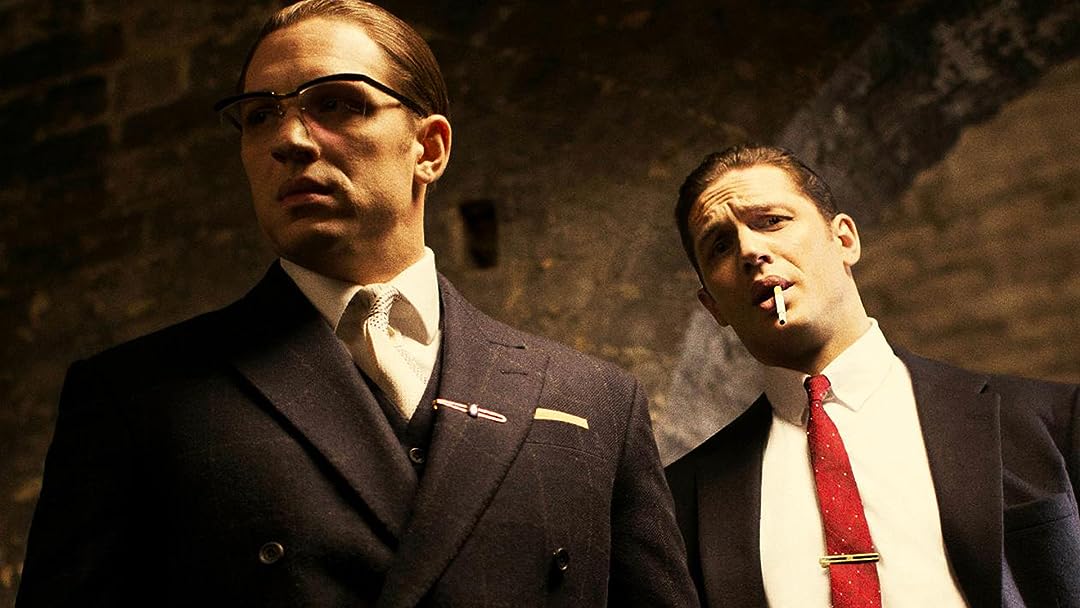 Christina ReynoldsReviewed in the United States on September 25, 2020
4.0 out of 5 stars
Easy to follow, and Hardy Outclasses Himself
Verified purchase
Legend is a 2015 British-French biographical crime thriller film written and directed by American director Brian Helgeland. It is adapted from John Pearson's book The Profession of Violence: The Rise and Fall of the Kray Twins, which deals with their career and the relationship that bound them together, and follows their gruesome career.

It's only fair to start his review I talking about the man of the hour ( I guess technically the men of the hour in this case) - mister Tom Hardy; up until recently I used to feel kind of “eh” about Hardy as an actor, and my ears really didn't perk if you mentioned him being in a film.
Lately, however, he has started to rub off on me and why shouldn't he? Hardy excels at playing characters you absolutely love to hate, and he absolutely outclasses himself in this performance especially. Portraying the twins can be especially difficult as an actor has to make both characters extinguishable to the audience; Sans the obvious differences between Reggie and Ronald (Ronald wears glasses and Reggie’s hair is always slicked-back) Hardy includes the tiniest of mannerisms that make them truly unique, Such as the way in which their eyes move and the way their lips look when they talk. Reggie is beaming with confidence and has the charisma to match, whereas Ronald is repressed (for reasons I will not mention here) and at times is painstakingly awkward. Both brothers can be described as a loose cannons however, and are apt to acting out violently in a way most people would describe as insane or unpredictable; Those moments, despite being uncomfortable for some, are where Hardy truly shines and the authenticity of his characters is most obvious. If I suggested watching this movie to anyone for one reason, It would be for Hardy’s performance alone, hands down.

I'm also not always the biggest fan of gangster movies because they can become very convoluted and thus hard to follow. The Narrative quality of ‘Legend’ is very straightforward; there are a lot of details given to the audience which may require some pausing to absorb the information, but all of the details provided are important and easy to link up. ‘Legend’ is one of the more cohesive biographical films I've seen in awhile, and I think that's just something worth mentioning.
In addition to leading the story along in a way that makes sense, the technique of narration encourages the audience to make their own decisions about how they feel about specific characters. There is an obvious bias due to the source of the narration, but this bias is delivered in a way that fosters ambivalence towards characters that are just so easy to hate. Behind Reggie’s insatiable need for control is a genuine desire to protect others around him. Ronald - who is clinically deemed as deranged - Is resourceful and often takes on other people's problems as his own.

Like most biopics, ‘Legend’ it's not a perfect retelling of the life of the Kray twins, although it is considered to be a pretty accurate account of their affluence and resulting downfall in life. The primary events - mostly involving murder and death - are accurately portrayed, although some details related to them (such as motivation) have been slightly adjusted. The largest change seems to be involving the depiction of the romance between Reggie and Frances; Mild spoiler alert and a warning to the audience, but Reggie is physically violent toward Francis in this film despite the abuse being purely psychological in real life. I don't think this makes Reggie any less scummy of an intimate partner, but it is just one instance of dramatization amongst others that is important to keep in mind when watching this film.

Michael J. AuroraReviewed in the United States on November 3, 2022
5.0 out of 5 stars
Awesome
Verified purchase
Great movie at a great price

carolintallahasseeReviewed in the United States on August 11, 2022
4.0 out of 5 stars
Tom Hardy is His Generations Marlon Brando!
Verified purchase
I like the genius of Tom Hardy! A truly gifted actor, you believe that he is two types of Sociopaths! It is a gritty depiction of the real-life Kray brothers, gangsters from the UK who were as vicious as Al Capone! I don't like the profanity, but these are not choir boys! I had seen them in a British documentary and was intrigued when I saw this on Prime TV. It is worth watching, especially if you believe like me that Britain did not have this kind of criminal; eye-opening.

Krissy95 Reviewed in the United States on October 16, 2022
5.0 out of 5 stars
My son likes it.
Verified purchase
The one thing though is being charged for it twice. That is missed up.

CharReviewed in the United States on October 19, 2022
5.0 out of 5 stars
Tom Hardy is everything
Verified purchase
Period.

Juvenal JuarezReviewed in the United States on October 10, 2022
5.0 out of 5 stars
Great buy!
Verified purchase
On time and a great buy !

Natalie AnantuaReviewed in the United States on June 11, 2019
5.0 out of 5 stars
A compelling story made even more compelling by the actors and directing/editing/writing
Verified purchase
Tom Hardy, hands down stole the show in his portrayals of the late Ronnie and Reggie Kray, gangsters who had a reign of terror over East End London back in the 60s, and you really get a sense of that here. Tom Hardy did an excellent job playing Ron, the menacing, mentally ill sociopath with unpredictable bouts of violence and Reggie, the more charming but near equally twisted twin. More importantly, he made them distinct from each other and it was so engaging to see the two play off each other. Hollywood's done gangster films before, but none with such a compelling dynamic like this. This film hands down solidified Mr. Hardy as a very talented, multi-faceted actor gee whiz! Emily Browning (Frances) is gorgeous in this as always.
I was expecting them to go into the later years of the Kray twins, like when they were incarcerated and afterwards, which would probably tack on another hour of run time, which I'd be so ok with and that's rare for me personally. I still think it would've been cool to see, but I understand why they kept the story to just right before their life sentences. I mean, this is where the meat of their timelines lie! And it also keeps the story laser focused (something which the movie Gotti could've taken pointers from) and let's us follow a narrative from beginning to end and how it unravels and how that affects everyone, especially our protagonists here. The dynamic is the most captivating thing as aforementioned above. So even though I wanted more, it's probably best that they kept it at the run time they had it at.

Everyone did a great job here, but many faces here look unfamiliar so I couldn't say much past that. But I know they did good. I also love the nod to the weird rhyming slang that East End is so famous for (raspberry meaning cripple, as in raspberry ripple-> cripple). Makes it feel that much more authentic and is often used as a writing tool to signal to the viewers that you're watching a movie that either takes place in East End or has characters from there.

I would absolutely recommend the movie 5/5, and if you're interested in more about the Kray twins, you should read into some more info about them. Reggie wrote an autobiography of the life portrayed here and more, and there's also poetry and love letters to read from especially Ron. You'll still find juicy bits after this movie, so good luck fellow reader!
3 people found this helpful

LulaReviewed in the United States on March 30, 2016
5.0 out of 5 stars
Legend of The Krays
Verified purchase
How Tom Hardy wasn't nominated for best lead AND supporting actor after viewing Legend, I have no idea.

I also own the movie The Krays, starring the (real life) Kemp brothers as Reggie and Ronnie Kray and I feel that both movies are well done, yet show very different views of the Krays and their story. The Krays (movie) focused a great deal on the brother's mother and aunt's influence in shaping their lives early on. Legend however, barely acknowledged their mother at all (which I found a bit odd). The Krays (movie) focused a great deal on both brother's "activities" within the firm. Legend meanwhile, focused more on Reggie and his relationship with his wife Francis (and the effects of that marriage on the brother's relationship). In Legend, the movie is narrated by Francis, so I suppose it makes sense that it would be slanted a bit more towards Reg.

Something I found interesting in the movie The Krays, Ronnie (played by Gary Kemp) is portrayed as openly homosexual, in complete control of his mental faculties but with a hair trigger temper and very prone to violence. Reggie (played by Martin Kemp) is portrayed (I thought) as taking a bit more of a backseat and letting Ronnie run a good deal of the show. Conversely, Legend shows Reggie as the brains behind the firm and struggling to keep Ronnie and his schizophrenia under some sort of control. Legend also addresses Ronnie's open homosexuality and "deviant, men only" parties that included several top politicians of the day. Unlike The Krays (movie) Legend delves into Ronnie's documented mental illness and how it added to the violent circus that followed him around (and ultimately was his undoing). The Krays movie never indicates that Ronnie has anything more than a violent temper.

Both movies are top notch, but I'd have to categorize The Krays as perhaps being a touch more "Hollywood" in the way some things were glossed over. I did think the story about their mother (Violet) and aunt Rose was an important aspect of influence in their childhood. Tom Hardy was truly amazing the way he was able to portray both men as looking alike, yet managing to define them as individuals. There are still things that neither movie got right, or just plain omitted, but I don't think either movie glorified the brothers in the way that say The Godfather glorified the mafia. I would recommend Legend (and The Krays) to anyone interested in the Kray brothers, just remember to take it all with a grain or two of salt.

One thing I wish the powers that be would rectify is the annoying fact that the movie The Krays STILL is NOT available on DVD in region 1 areas (North America and Canada). If you want to discover that cinema gem, you must have access to a VHS tape player (one of the few VHS tapes I held onto when I switched over to DVD). Somebody needs to get that movie on disc!!!
See all reviews
Back to top
Get to Know Us
Make Money with Us
Amazon Payment Products
Let Us Help You
EnglishChoose a language for shopping. United StatesChoose a country/region for shopping.
© 1996-2022, Amazon.com, Inc. or its affiliates