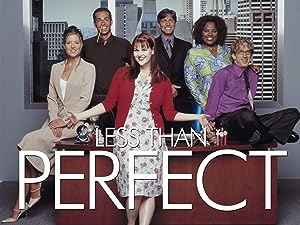 B'LyssReviewed in the United States on September 14, 2012
4.0 out of 5 stars
Delightful sitcom!
Verified purchase
High on my list of favorite sitcoms. It's really quite a funny show. There is some catty behavior but that is always undercut in a humorous way. The main character in Less than Perfect is Claude and she is adorable. She is under constant "attack" by some snarky coworkers looking to climb their way to the top, even attempting to use her as a step ladder. Her friends from the fourth floor are hillarious though and lighten the mood considerably, otherwise the constant bickering on the twenty-second floor could get old really fast. The bottom line is that Claude is just a really nice girl and she is out of her element working amongst a bunch of back-stabbing, go-getters, out for themselves only, but she manages to stay her positive, cheerful self despite the wolf den she's now working in.

I just love sitcoms that have a positive vibe, unlike most modern shows. If you haven't seen this show, do yourself a favor and get it. You won't be disappointed. It's a good chuckle.

With that all said though, what I don't like is when studios only release the first season with no intention of releasing the rest, or it will take them forever to release them to the market. They have done this with one of my other favorites, Dharma & Greg as well. It is really annoying. Even still, at least we have season one to enjoy.

VLM of CAReviewed in the United States on May 19, 2012
5.0 out of 5 stars
Hilarious!!!!!!!!!!
Verified purchase
Purchased this DVD set because I was a HUGE fan when it was on TV. One of Sherri Shepherd's early TV series roles and she is fabulous, as is Eric Roberts (who knew he could do comedy so well?!), Sara Rue (super talented comedian), Andy Dick (no explanation necessary). Also, the supporting actors Zachery Levi and Andrea Parker are totally awesome as self-absorbed, back stabbing, gossip mongers with over-sized egos who will do anything/everything to climb the corporate ladder!!!! I highly recommend this wonderful comedy series to anyone who is seriously interested in laughing!!!! Love it and wish there were more seasons available, I'd buy them all!!!
10 people found this helpful

LempdoodleReviewed in the United States on September 22, 2010
4.0 out of 5 stars
Hilarious and charming, with a bite
Verified purchase
This show is as fun as I remember, with many laugh-out-loud moments, and Sara Rue is a comedic gem and a doll as lead character Claude Casey. Sure, there are some character and plot clichés, but the cast meshes together so hilariously well that I find them easy to overlook. I'm giving this DVD package only 4 stars, though, because there are no extras of any kind, which is a bummer. The order of the episodes on the discs is also a bit out of whack from the original air dates. I honestly didn't even notice this, though, until the final disc; when you get to this one, just make sure the last episode you watch is the season finale, "The Umbrella."
11 people found this helpful

CoffeebreakwhateverReviewed in the United States on October 24, 2011
5.0 out of 5 stars
Love it!
Verified purchase
Sitcoms these days are pathetic. They are stupid, all about sex and just plain mindless 22 minutes of ignorance. However...back in recent decades, sitcoms were funny. This is one of the last good ones on TV. It is nice to see a main female character that isn't a "barbie doll" look-alike. She is funny, serious, has normal problems and works a high status new station...with all those problems and the issues with friends and co-workers etc. It is just a fun sitcom to enjoy, laugh and applaud. I highly recommend this series
5 people found this helpful

AmandaReviewed in the United States on July 18, 2018
5.0 out of 5 stars
Loved this show
Verified purchase
Loved this show! Was so happy to see this little gem on Amazon. Looking forward to future seasons being released.
2 people found this helpful

John DoeReviewed in the United States on October 17, 2010
5.0 out of 5 stars
Buy it ... buy it now
Verified purchase
This show is fantastic ... my second favorite sitcom of all time (second to Arrested Development - another show that suffered from early cancelation). This show is witty, and delivered with sharp precision. Why do we have to wait so long for the DVD release of all four seasons? Because not enough people are buying it ... so buy it, buy it now - you won't regret it! This entire series is laugh out loud funny.
10 people found this helpful

Debra PikeReviewed in the United States on August 27, 2012
5.0 out of 5 stars
Please put subsequent seasons on DVD
Verified purchase
I love, love, love this show! Please bring the other seasons out on DVD. We are begging you. This show is a real gem.
21 people found this helpful

David S JonesReviewed in the United States on August 23, 2016
5.0 out of 5 stars
Five Stars
Verified purchase
I really liked this series, especially Zachary Levi, I really hate it got cancelled ...
2 people found this helpful
See all reviews
Back to top
Get to Know Us
Make Money with Us
Amazon Payment Products
Let Us Help You
EnglishChoose a language for shopping. United StatesChoose a country/region for shopping.
© 1996-2021, Amazon.com, Inc. or its affiliates