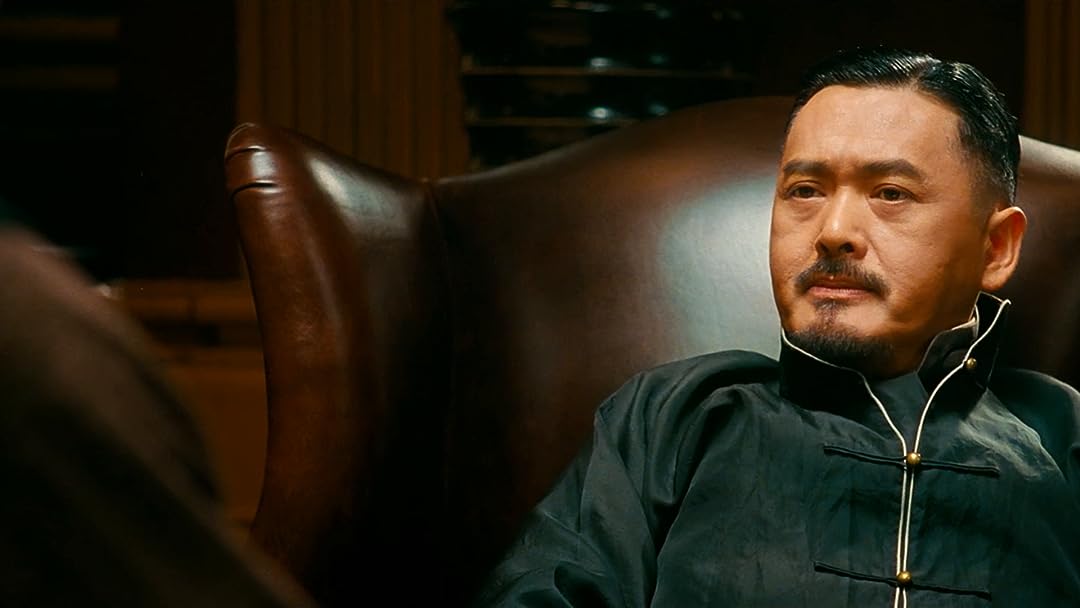 (131)
7.22 h 12 min201116+
In this comedic western set in the 1920's, outlaw Zhang hijacks a train carrying the governor and a whole lot of loot. When the train derails, Zhang hatches a scheme to impersonate the governor with the help of the official's shady assistant.

The film's humour goes over the top (with CGI assistance), with one of its funniest and most reference-laden scenes of a train holdup by bandits in 1920 warlord China during the first few minutes leading into the titles. The steam railway engine belches smoke, like any fire chariot... but wait, it's being drawn by horses. All that smoke is from the biggest Sichuan hotpot you've ever seen, that almost fills a luxurious private carriage in which a new provincial governor (Ge You), his wife (Carina Lau), and counselor (Feng Xiaogang) are carousing and banqueting as they journey to their new post, protected by a second carriage full of highly alert Republican guards armed with ancient matchlocks. All are unaware that they are targeted for ambush by bandit leader Zhang (Jiang Wen).

This is the fourth film directed by Jiang Wen, a famous Chinese actor who extends the noodle western metaphor of this film by acting and directing, somewhat in the footprints of Clint Eastwood, but very much in his own style. This is a funny movie with high production values, humour darker and less accessible to non-Chinese audiences than that of Jackie Chan - without the martial arts showmanship and slapstick that Chan brings to his films. The film is not at all in the familiar historical epic/kung fu genre of Chinese movies recently popular in the west.

The script, by Jiang Wen, is adapted from a story by Sichuanese author and satirist Ma Shitu 马识途, 'Dao Guan Ji' 盗官记 ('Tale of the Bandit Official'), from his fictional work published in 1983, 'Ye Tan Shi Ji' 《夜谭十记》('Ten Night-time Tales').

Jiang Wen's cast is well chosen, with particularly good work by his four very capable lead actors, including himself. The most recognizable member of the cast to western audiences, Chow Yun-Fat, plays against type as a villain, Huang, the mob boss of Goose Town. One of China's favourite cinema clowns, Ge You - a Chinese Cantinflas - shows great comic timing throughout in the role of conman Ma Bangde. Carina Lau has the only standout female role as the much-widowed governor's wife. Jiang Wen himself plays the wily, whimsical bandit leader Zhang.

The Emperor Motion Pictures Blu-ray release available through Amazon resellers has excellent image and sound quality, and a second special features disc. Unfortunately for most of the non-Chinese speaking audience, the sound track options are only Mandarin, and - unusually - Sichuan dialect. The English sub-titles are good, but being necessarily abbreviated cannot carry all nuances of the script, or even its Chinese profanity.

The BearReviewed in the United States on September 5, 2013
5.0 out of 5 stars
An unexpected delight
Verified purchase
I purchased this because I'm a fan of Chow Yun-fat, but it turned out much more than a good Chow Yun-Fat flick. I really wish I could give it more than 5 stars.

The best description of the overall tone is sardonic. The music is almost entirely low-key western classical stuff that adds to the sense of irony.. All performances were excellent, but Jiang Wen's performance went above and beyond. The direction is tight and the story is both interesting, clever and oddly satisfying. The ending is delicious.

Very highly recommended. I watched the film in Mandarin with English subtitles. There is an English dub which I didn't listen to. I find the dubs lack the subtle tonal shading given by the on-screen performers.
4 people found this helpful

Lin707Reviewed in the United States on July 13, 2011
5.0 out of 5 stars
Wow, an incedible movie!
Verified purchase
This film will be one that is able to cross cultural boundaries thanks to its Hollywood style production budget which includes flawless special effects, a simple to understand and entertaining story, plenty of action, plenty of girls, and the star power of some China's best actors. Chow Yun Fat is terrific. This is his best movie in a long long time. I won't delve into the story because the Amazon product page has a good description. Exciting action, outlandish black humor and absolutely perfect cinematography and production values make this movie thoroughly enjoyable. This particular DVD is wonderful also, featuring a great transfer, perfect English subtitles, and English menus. The DVD was official, and played on my USA DVD player.
6 people found this helpful

K-Pop FanReviewed in the United States on March 19, 2017
3.0 out of 5 stars
The Bullets Seldom Fly, but the Boredom Does
Verified purchase
Much more a comedy than an action film, and not a particularly funny one at that. A lot of Chinese comedies are full of inside cultural jokes that just don't translate well to subtitles. My Mandarin is okay and it is definitely the case that many of the subtitles are pretty free-form translations that capture neither the precise meaning nor the spirit of the original. And it just never seemed to end.
2 people found this helpful

WLReviewed in the United States on December 27, 2021
5.0 out of 5 stars
Great!
Verified purchase
Masterpiece!
There won't be any Chinese movie as good as this one in the near future...You know what I mean....
P.S. the cast is interesting. Not only the main characters are played by THE BEST, some obscure characters may also be played by......

ArchangelReviewed in the United States on August 7, 2011
5.0 out of 5 stars
The Chinese Cary Grant
Verified purchase
I believe that Chow Yun Fat is one of the greatest living actors. I like to call him the Chinese Cary Crant. Like Mr. Grant, Chow Yun Fat can do it all. Comedy, action and heavy drama. He even has sung and danced!

In Let the Bullets Fly Mr. Chow gives another terrific performance. I hope that the upcoming Monkey King will be as good.

I do wish that America's leading Directors and Producers would wake up and use Mr. Chow in some BIG films that American audiences would get to know him like the rest of the world already does!
5 people found this helpful

Neil AnthonyReviewed in the United States on January 24, 2022
2.0 out of 5 stars
I stopped watching, gross
Verified purchase
Great potential, just got too stupid and gross for comedy

Nom D PlumeReviewed in the United States on May 15, 2013
5.0 out of 5 stars
Great Movie
Verified purchase
Loved this movie, the interaction between the characters is great. The action is good with enough pauses to get some story time in. Like the period costumes and sets though the town reminds me of those westerns where you know the producers built the whole set for the movie.

Only think I did not like was some of the sub-titles went by a little to fast, guess I better learn Chinese.
3 people found this helpful
See all reviews
Back to top
Get to Know Us
Make Money with Us
Amazon Payment Products
Let Us Help You
EnglishChoose a language for shopping. United StatesChoose a country/region for shopping.
© 1996-2022, Amazon.com, Inc. or its affiliates