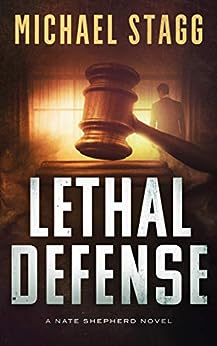 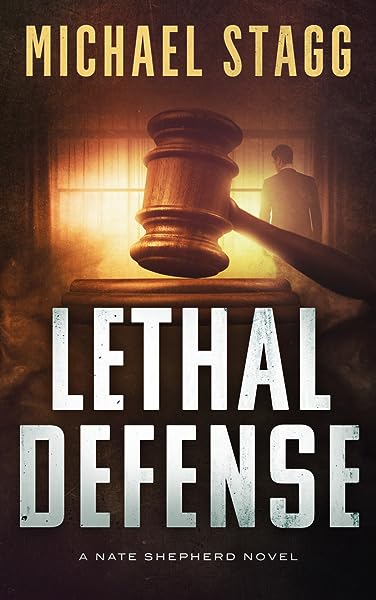 by Michael Stagg (Author) Format: Kindle Edition
Book 1 of 6: The Nate Shepherd Legal Thriller Series
See all formats and editions
Sorry, there was a problem loading this page. Try again.
A client savagely kills a man to protect a friend. A lawyer with secrets must prove it was justified.

Attorney Nate Shepherd left a big firm to go out on his own. He sees nothing but opportunity when an out-of-town lawyer wants to hire him as local counsel on a high-profile murder case. Though his family worries that the case hits too close to home, Nate joins the defense team.

When circumstances force him to take on a bigger role, Nate ignores his family’s fears and throws himself into his client’s defense. But as he digs deeper, every aspect of the case raises memories of a terrible event that Nate has tried his best to bury.

Battling an aggressive prosecutor in court and a dogged reporter outside it, Nate fights to prove that his client’s brutal, bloody slaying of an evil victim was right. But when Nate’s own story is exposed, it threatens his client’s freedom … and Nate’s carefully constructed life.

Can Nate fend off his own demons long enough to save his client?

Michael Stagg was a civil trial lawyer for more than twenty-five years. He has tried cases to juries, so he’s won and he’s lost and he’s argued about it in the court of appeals after. Michael was still practicing law when the first Nate Shepherd books were published so he wrote them under a pen name. He writes full-time now and no longer practices, but the pen name has stuck.

Michael and his wife live in the Midwest. Their sons are grown so time that used to be spent at football games and band concerts now goes to writing. He enjoys sports of all sorts, reading, and grilling, with the order depending on the day.

Marjorie A. Rafos
4.0 out of 5 stars Easy read
Reviewed in the United States 🇺🇸 on January 31, 2023
Verified Purchase
Enjoyed the author’s pace as he related the facts of the case. Read it in one sitting as I was anxious to get to the closing arguments . Recommend this to all legal thriller fans.
Read more
Helpful
Report abuse

Roxy
5.0 out of 5 stars Great Protagonist
Reviewed in the United States 🇺🇸 on January 19, 2023
Verified Purchase
Legal thrillers are my favorite genre of books. Through this author’s writing I envisioned the characters clearly, but admit to being surprised by the ending. Most authors find a way to uncover the real culprit. Not so with this book. I also enjoyed the touches of humor. Am looking forward to reading the next book in the series.
Read more
2 people found this helpful
Helpful
Report abuse

Kindle Customer
5.0 out of 5 stars Sarah's story.
Reviewed in the United States 🇺🇸 on January 10, 2023
Verified Purchase
I truly loved this story and each character was perfect. I called this Sarah's story because she like so many, have become addicted to meds prescribed by physicians, without following up with them. Nate was able to use his past, because his wife who died from addiction. This helped him to move forward working , so the jury would understand why Hank did for his friend.
Read more
Helpful
Report abuse

Kari Bowman
5.0 out of 5 stars Great read
Reviewed in the United States 🇺🇸 on January 17, 2023
Verified Purchase
Really enjoyed this book! Good
characters and the story was well-paced. Didn't want to put it down! It was obvious that Michael Stagg has a background as a trial lawyer, yet he writes in a way that those of us with no legal background can enjoy it.

Chaplain-GranStan
4.0 out of 5 stars worthwhile
Reviewed in the United States 🇺🇸 on January 23, 2023
Verified Purchase
A lawyer themed court case mystery that was a fun read. I definitely will read some more of this author.
Read more
Helpful
Report abuse

Old River Diva
5.0 out of 5 stars This is a great book
Reviewed in the United States 🇺🇸 on December 30, 2022
Verified Purchase
This book, by this author is heart-stopping and hilarious. Oh, it’s all serious as a man is dead and our lawyer is defending the accused. Socially conscious about heroin and fentanyl on one end and sharing humor with us readers on the other. The trial is serious and the outcome almost certainly death. Read the book, it will get to you.
Read more
Helpful
Report abuse

Becky J
5.0 out of 5 stars Enjoyed
Reviewed in the United States 🇺🇸 on January 8, 2023
Verified Purchase
Michael Stagg was a new author to me when I read this book And this legal thriller was a bit different from the many other legal thrillers I have read. Fast paced and fun!
Read more
Helpful
Report abuse

K. MacKenzie
5.0 out of 5 stars Really great book
Reviewed in the United States 🇺🇸 on December 8, 2022
Verified Purchase
This is my first Michael Stagg book, I dug in after checking the reviews, which were very helpful. For readers who enjoy Sheldon Siegel, Robin James, and the late Scott Pratt, Mr. Stagg's writing style won't disappoint. The detail, the humanity of Nate, the narrator, and the sheer personableness of the characters combine to make a great book. Also, the resolution isn't predictable, which adds a good dose of ongoing suspense. I've found a new favorite author. If you are looking for an exciting, unpredictable, well-written legal thriller, you'll be very happy with Lethal Defense.
Read more
3 people found this helpful
Helpful
Report abuse
See all reviews

David Jackson
5.0 out of 5 stars Compelling read
Reviewed in the United Kingdom 🇬🇧 on January 23, 2022
Verified Purchase
I love courtroom dramas, love Scott Turow or Sheldon Siegel, for example and this discovery offers promise of another series to devour. It’s ‘don’t want to put it down’ and ‘looking forward to picking it up’ good. Plot and characterisation are good but what singles it out is the quality of the trial scenes - and the fact that you care. Recommended.
Read more
One person found this helpful
Report abuse

Pansy
5.0 out of 5 stars Extremely well written courtroom drama
Reviewed in the United Kingdom 🇬🇧 on March 16, 2022
Verified Purchase
There were some critical reviews about the quality of the writing and maybe the book has been cleaned up but I hate to read even a good story badly told: this was not it, Michael Stagg can write and I am going immediately to his next novel.
Read more
One person found this helpful
Report abuse

Mark_my_words
5.0 out of 5 stars Glad to discover a new series
Reviewed in the United Kingdom 🇬🇧 on March 10, 2022
Verified Purchase
A good story, a central character who I warm to. So glad to find a new series to get stuck into.
Read more
2 people found this helpful
Report abuse

Pamela Edwards
5.0 out of 5 stars Excellent read
Reviewed in the United Kingdom 🇬🇧 on January 10, 2021
Verified Purchase
Just discovered this author. Read the first two books and thoroughly enjoyed them. Have the 3rd ready to reD on my kindle and the 4th is on order. Excellent read.
Read more
One person found this helpful
Report abuse
See all reviews
Report an issue
Does this item contain inappropriate content?
Report
Do you believe that this item violates a copyright?
Report
Does this item contain quality or formatting issues?
Report