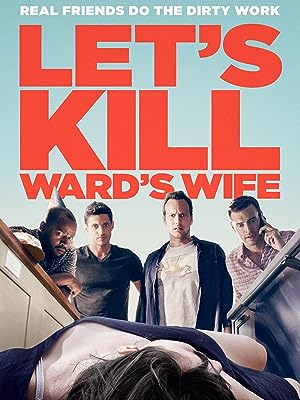 (1,847)5.41 h 22 min2015X-Ray
Everyone hates Ward's wife and wants her dead, but when his friends' murderous fantasies come true, additional complications arise. A blackly comic caper about helping a friend out of a bad relationship by any means necessary.

Phyl'licia L. DixonReviewed in the United States on March 5, 2016
5.0 out of 5 stars
Crazy Good
Verified purchase
This movie is crazy, funny. It actually manages to have crude humor, which many movies attempt these days but totally miss (finally a movie that gets it right). I am biased though since the movie has most of my favorite actors in it: Scott Foley (The Unit, Scandal); Donald Faison (Scrubs); Amy Acker (Person of Interest, Buffy the Vampire Slayer and/or spinoffs) and Patrick Wilson (Watchmen, A Gifted Man, The A-Team). Favorite scene has to be the fireplace scene. LOL! Dagmara Dominczyk (The Count of Monte Cristo) was awesome as Ward’s wife. Some reviewer wrote that she went too far and all she needed was pink hair rollers and a frying pan. I say the chick with the rollers and frying pan needs to sit down and take notes from Dagmara. Oh my goodness, the scene with her and Scott Foley in the kitchen with the cake. Um, that’s good cake! This movie is absolutely crazy!!!

Rand StahlReviewed in the United States on September 4, 2015
5.0 out of 5 stars
Another Look At the Banality Of Evil, Done Humorously
Verified purchase
One reviewer wrote it's difficult to explain black comedy. Well, has that reviewer or any other viewer considered the irony underlying the story's series of events from which rises its humor? Comedy of this movie is rooted in the irony of the predicament and how the characters respond to that predicament. Hilarious moments occur many times in this movie.

Directed by Scott Foley is better known for his acting in TV shows, The Unit and Scandal. Let’s Kill Ward’s Wife comically portrays how a group of four friends, suburban professionals, conspire to get away with murder. The event of the killing itself is incidental, not premeditated. Or is it?

A premise such as this is the set-up in which the comedic action takes place. Besides this movie being a comedy, it is also a buddy movie. Through the situation brought on by the murder of Amanda, Ward’s wife, the story demonstrates an examination of how this specific murder affects the relationships between the four guys. How the situation of the murder is set up makes it so even wives of two characters, Tom and David, become quickly involved. Even the wives are neither horrified by what has transpired nor unwilling to participate in events connected to the murder's cover-up.

As a group there is very little remorse demonstrated by anyone. Instead the group’s behavior would be better fitting in the event of their killing, feather plucking, and then carving up a fresh chicken. It’s the group’s displayed nonchalance in this ghastly situation that makes this film humorous.

As said, shocking series of appalling events connected with the murder and its cover-up fail to elicit any semblance of horror in or among the characters except in one character, Ronnie. His sense of remorse occurs in sharp contrast to each character's matter of fact sense of banality about the murder.

That demonstrated effect of banality in the outrageous context of the murder and its cover-up is at the root of what makes this film a comedy. Perhaps that is the intent of the screenwriter, to dramatize another aspect of the banality of evil. Such banality ironically invites the viewer to identify with the characters.

takkun Reviewed in the United States on May 18, 2019
3.0 out of 5 stars
average dark comedy
Verified purchase
If you are looking for a movie of this sort and haven't seen Very Bad Things, Home Sweet Hell, Arizona, or even Rough Night, i'd advise you check those out first and in that order. This movie isn't bad but it feels like a watered-down version of something good. It's dark comedy for sure with its fair share of disgusting moments and Patrick Wilson is great but it doesn't have the impact (at least for me) of the other movies mentioned.

SeeairReviewed in the United States on September 2, 2015
1.0 out of 5 stars
the only thing this movie achieved was making me wonder why any of these actors agreed to it
Verified purchase
Both my Significant other and I agreed- This movie is trying to be too many things and succeeds at none of them. During the ENTIRE movie you really don't know if you should be laughing, disgusted, or touched. The movie is all over the place, HIGHLY unrealistic, not funny in the slightest, and has probably one of the worst, most pointless endings I've seen in a movie.

We put this on knowing it wouldn't be that great, but wanted something kinda funny, morbid, and light hearted to watch...well the only thing this movie achieved was making me wonder why any of these actors agreed to make this movie.

Mustang827Reviewed in the United States on September 10, 2015
4.0 out of 5 stars
Lightweight but Funny
Verified purchase
This is really somewhere between 3 and 4 stars. The setup is great! It is really easy to hate this bitch, and it's easy to see why they jokingly talk about offing her. However, the actual deed could have been so much more creatively done. Also the aftermath is chock full of giggles, but with a little more effort and direction this could have been a fall out of your seat laugh so hard type of movie. Finally the conclusion, if that is what it was was lame. In summary, it's good for laughs but if you do a doobie before hand it could be magnificent!
One person found this helpful

Kristin MurisonReviewed in the United States on March 11, 2016
5.0 out of 5 stars
Hilarious, Smart, and super Dark
Verified purchase
This movie is very entertaining but not for anyone who does not like dark comedy. The movie is kind of gorey in respect to blood. The jokes are dry and dark so if that's your kind of humor you will love it. The acting is solid and the plot moves at just the right pace. I've already rewatched the movie because it was so entertaining. The dialogue and characterization feels fresh and is fun to watch. Mainly it's just a really solid movie. I watched initially for Amy Acker and I think she did a fantastic job and any fan of hers should see this movie.