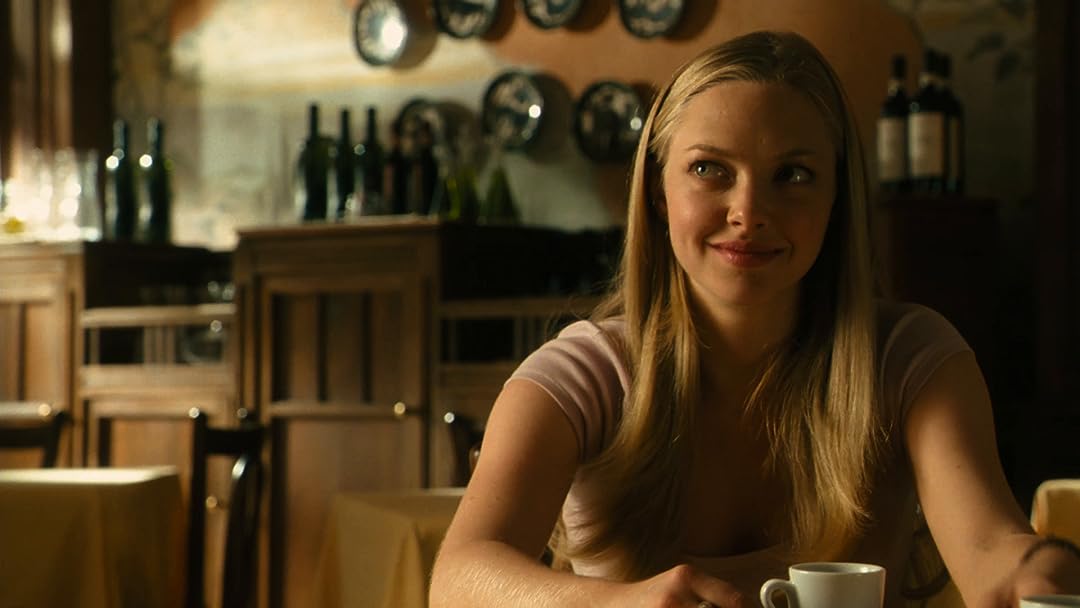 TirronanReviewed in the United States on July 16, 2018
5.0 out of 5 stars
Well written, well scripted, and oh so engaging.
Verified purchase
I'm going to echo the comment that another put in here, too sappy for intelligent people. Well, first off I am a guy and, yes I know we aren't supposed to like romance movies still, some of us do. The story works, and if the plot is unbelievable it none the less is a wonderful trip. Each of the characters is fully fleshed out meaning that they have their own directions and goals. It would seem simple but Lord above, it fails in so many plots. This storyline is well fleshed out and yet wastes not a moment on anything not related to moving the story forward. Moving back to my 1st sentence, here is the other thing... love isn't about intelligence., it is about passion and goals and wrapping your life with another's without losing yourself. This movie really does touch on all of that.
37 people found this helpful

Amazon CustomerReviewed in the United States on December 15, 2016
5.0 out of 5 stars
which makes me wonder why I even liked it?
Verified purchase
This movie is so contrived and so predictable, which makes me wonder why I even liked it?! But, instead, I actually loved it! It's one of those movies that has such good dialogue and acting, that you can even watch it over and over again! They put the two young actors on the cover to make you want to buy it, and honestly, they are lovely to look at and can make you laugh, but truthfully, the acting by the grandmother and the old gentleman who was her lost love, is simply amazing. More so than the young lead actors. You know you're watching truly gifted actors when they have lines, even though time has past them by them by a bit. Sadly, I can't even name the older actors? But they're both tremendous at their craft, and they make you believe in true love again! Okay, so this is a girly movie, but I think guys can enjoy it too! It's like, a great movie to watch with a glass of wine, for a romantic night with someone you love! If you don't enjoy this movie, a little or a lot, you're probably dead.
76 people found this helpful

Daryl ChinReviewed in the United States on July 20, 2020
3.0 out of 5 stars
Romcom with a transcendent moment
Verified purchase
LETTERS TO JULIET is a rather too cutesy "romcom" (a term i find offensive, but if the term fits, well, it does here). The primary story of a young writer (played by Amanda Seyfried) who finds inspiration during a trip to Verona, where the "myth" of Romeo and Juliet infiltrates the atmosphere, has its charm, even if it tends to be rather cloying. But then the movie stops for the real thing: Vanessa Redgrave enters the story, as an elderly woman who had lost a great love in her youth, and everything she does is grounded in such emotional power. And then, well... the movie goes so far beyond its little romcom trappings when Vanessa Redgrave finally meets the love of her youth (played by Franco Nero). The fact that, in reality, Vanessa Redgrave and Franco Nero had been a couple, and then parted after a few years (though they remained in contact because of their son, whom they shared custody), just brings added weight to the scene. But it's the close-ups of Redgrave's face, as she sees him, and the incredible range of emotions which flash across her face, and the amount of love, regret, happiness which suddenly become unleashed and flood the screen... this is truly transcendent, and a scene which takes this little movie and elevates it into something sublime. And it is because one of the greatest actresses of the 20th Century (for many of us, maybe the greatest English-speaking actress of the 20th Century) has a scene worthy of her depth of passion and love.
11 people found this helpful

KimmerReviewed in the United States on July 15, 2018
5.0 out of 5 stars
Genuinely lovely romantic movie. Especially for us hopeless romantics!!
Verified purchase
Wonderful romantic movie! Best one I have seen a long time. Lovely scenery, and the premise is wonderful. Oh to be one of those ladies that write back to all the people that leave their letter to Juliet.. I absolutely would have loved to be on that adventure to find the lost love of 50 years ago. I cried a lot, which I do as I am a hopeless romantic and each time I watch any romantic movie, be it sappy or genuinely lovely like this one I fall in love with my husband over and over again. I have been with my husband for 47 years and to have a love like ours is amazing.
I am so happy I watched this today. I would recommend it to any hopeless romantic like me.
27 people found this helpful

Andrea S FaulhaberReviewed in the United States on August 29, 2020
1.0 out of 5 stars
Save yourself! This movie stinks!!! Nothing redeeming about it.
Verified purchase
Please don't watch this! It started slowly, but based on a few other reviews and the good reviews re: Vanessa Redgrave and her story arch, I continued watching. It does not get any better. It's horribly cliched. I could have written this plot and that's not saying much. Sophie's character is insipid and shows no growth. Her love interest is truly a bore and a dope. He's introduced as a bore and a dope, but we're supposed to believe he's actually a great guy. It's just not convincing or interesting. Sophie's fiance treats her horribly from day one, so it's just annoying that she stays with him as long as she does, not at all surprising that they finally break up. Please learn from my mistake and do not watch this. I like good clean movies and will put up with a fair amount of cheese, but this was over the top bad and a bore with no engaging or interesting characters or character development.
6 people found this helpful

likaReviewed in the United States on November 24, 2017
5.0 out of 5 stars
Such a beautiful scenery and a nice cast
Verified purchase
Such a beautiful scenery and a nice cast. A long lost love letter is found fifty years after it was deposited in to an old wall. This letter was never answered by the Secretaries of Juliette. The love letter gets answered by a New Yorker, whose future hubby, an ambitious chef trying to open his Italian restaurant in New York, he is now too busy with suppliers during his pre-honey moon to really enjoy Italy with his bride.
Unexpectedly, an elderly woman arrives from London to Verona in reply to the letter, looking for her lost true love from old letter, whom she left waiting under "their tree" in 1950s, when she left for England, where she got married. The elderly lady is escorted by her handsome but grumpy lawyer-grandson.
Actors are charming and Italy is always Italy. A perfect escapist's movie to enjoy.

C8H10N4O2Reviewed in the United States on November 10, 2020
4.0 out of 5 stars
This movie may make you question your taste
Verified purchase
[CONTAINS SPOILERS]

From the beginning, this movie had the ambiance of something you'd find on The Hallmark channel (and it probably was on there at some point). Amanda Seyfried coupled with the not-too-terrible IMDB rating of 6.5 convinced me this was worth taking at a look at at 4AM since I couldn't sleep. I needed a break from my continuous re-watching of Star Trek, and this seemed like a better choice than the new Borat film (sorry, can't get into it).

So you've got Seyfried playing a writer who is engaged to Che from The Motorcycle Diaries who is now morphed into the Steve Jobs version of a chef. He likes her well enough, and why not...she's got Amanda Seyfried's eyes. But he's a bit too driven in his career pursuits for his own good, doesn't pay enough attention to her and the relationship, yada yada, you know the story. Then a taller version of Ryan Phillippe comes along after she answers a 50 year old love letter she found in a wall (I'm used to suspending belief in sci-fi movies, so I can apply the same skill to romcoms).

TallRyan seems like a jerk at first, but there's tension, there's attraction, yada yada. Long story short, they help Vanessa Redgrave's character find her long lost love, who surprisingly didn't have a Dos Equis when he finally rode up on a horse as The Most Interesting Man in the World. But they worked out, got married, and it was fairly touching.

Then we come to the very end where the movie shifts into full-on cheese drive. We're talking buying two boxes of Velveeta Shells and Cheese, tossing out the pasta in one box, and using both cheese packets on the remaining box. It's definitely a Hallmark movie at this point. And what really bothered me was my eyes started leaking, which I can only assume was due to hidden onions somewhere. No way I'd cry at that ending. Just wouldn't happen.

Overall, the movie is fairly predictable and nothing terribly original or mind-blowing. That said, it's decent and certainly not the worst thing you can watch at 4AM.

tt1106Reviewed in the United States on January 14, 2021
4.0 out of 5 stars
Sappy, but the best kind of sappy.
Verified purchase
Yes, it’s a sappy, unlikely romantic comedy about the merits of eternal love. And it’s so good. Don’t we all want to be loved by a person that would cross oceans to be with us. Yes. And this movie is about that. About being the center of someone’s universe. About capturing someone’s attention to the point that their every thought is about you. Yes, it’s true, I have a 32 year marriage to my best friend and I hope she feels this way. I wonder if it’s my unexplainable fascination with romantic comedies that leads me to want to prove to her that I am that kind of man. Not because I’m necessarily worth it, but because she is and I know it. Watch it, it’s cute. Gotta say, I got a little teary at the end. I love happy endings. Love, laugh, live. Be well.
2 people found this helpful
See all reviews
Back to top
Get to Know Us
Make Money with Us
Amazon Payment Products
Let Us Help You
EnglishChoose a language for shopping. United StatesChoose a country/region for shopping.
© 1996-2022, Amazon.com, Inc. or its affiliates