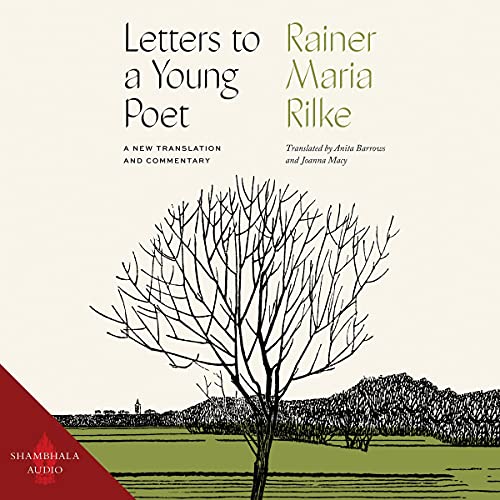 Letters to a Young Poet: A New Translation and Commentary

A fresh perspective on a beloved classic by acclaimed translators Anita Barrows and Joanna Macy.

German poet Rainer Maria Rilke’s (1875-1926) Letters to a Young Poet has been treasured for nearly a century. Rilke’s personal reflections on the vocation of writing and the experience of living urge an aspiring poet to look inward, while also offering sage wisdom on further issues including gender, solitude, and romantic love. Barrows and Macy’s translation extends this compilation of timeless advice and wisdom to a fresh generation of readers and listeners. With a new introduction and commentary, this edition places the letters in the context of today’s world and the unique challenges we face when seeking authenticity.

Nancy A.Bekofske
TOP 1000 REVIEWERVINE VOICE
5.0 out of 5 stars Inspirational Reading
Reviewed in the United States on June 1, 2021
I was just a year out of university when I was in a downtown Philadelphia book store and picked up a slender volume entitled Letters to a Young Poet. I read it over and over and the advice I found there helped me in my struggle through young adulthood. Forty years have passed, and I was curious to read this new translation and commentary of the Letters from the perspective of maturity.

Anita Barrows is a translator and poet, a professor of psychology and a clinical psychologist. Joanna Macy is a professor of philosophy and scholar of Buddhism, systems thinking, and deep ecology. Their commentary offers interesting psychological and social insights into the letters.

Rilke was himself a young poet of twenty-seven when cadet Franz Xaver Kappus wrote and asked him to read his poetry and for advice. Kappus had learned that Rilke had attended the his military academy and hoped for advice as he endeavored to be a poet while in the military.

Rilke had been sent to the academy because his father wanted to remove him from his mother's influence. She had given him a girl's name, Rene Maria, and put him in dresses. His father decided that he needed toughening up to prepare for a man's life.

Rilke responded to Kappus by warning that no one, nothing external, could advise him; he must look within for the answers, and in the process, he must embrace the unknown and that which is terrifying.

If his work and peers provided little inspiration, he told Kappus, "If your daily life seems to bleak--don't blame it--blame yourself that you are not poet enough to call forth its wealth." And if all else fails, there was his childhood, "that deep well of memories."

Letter Four includes one of my favorite lines, "have patience with all that is unresolved in your heart and try to love the questions themselves, like closed rooms, like books written in a foreign language." He continues to advise not to seek the answers, but to live into them.

Rilke had been influenced by the sculptor Rodin who had taught the importance of solitude for the artist. Art required looking within and being separate. An artist does not need others:"Where there is no community among people, draw close to the things that present themselves around you; they will not abandon you. The nights are there, and the winds that blow through trees and over the lands..."

Yes, solitude is difficult, but so is love. And love, he says, is not about "merging," the goal is a "more human love" that consists of "two solitudes that protect, border, and greet each other," a love that allows personal space and growth.

Fear of the mysterious and the unknown is also good, something we should be open to and embrace. "If our world has fears, they are our fears. If it has an abyss, it belongs to us. If dangers appear, we must try to love them...Perhaps every terror is, at its core, something helpless that wants our help."

And he advises to "let life happen to you. Believe me--you can count on life in any case."

Trust the process, embrace that which frightens you, learn to love the unknown, and do not look for romantic love to save you.

Rilke's advice helped me as a young woman, and it helps me as I approach my seventh decade. For the questions have only become larger, the unknown closer.

The commentators point out that the first letter from Kappus arrived as Rilke was writing The Book of Hours, in which he "reconcieveing of God as not the image of perfection but as the sacred process of seeing the brokenness of the world as a sacred act."

They see Rilke's Letter 7, to love without merging, representing Rilke's relationship with his great love Lou Andreas-Salome, and demonstrating the Jungian concept of individuation (self-realization that rises above self-centeredness). Lou studied with Freud and became the first female psychoanalyst.

Also, in Letter 8 ("the world has fears") they find Rilke's message foreshadowing Jung's concept of the collective unconscious (shared archetypes/symbols, not personal) which Jung wrote about twelve years later.

Barrows and Macy have eliminating sections of the letters as pontificating, or not relevant to modern readers, or because the message was badly conceived. Those segments appear in the commentary.

The translation is clear and easy to understand.

Every generation faces a world of terrors, every person struggles to forge a path to a whole and healthy life. I believe that the Letters are still relevant and have much to offer.

I received a free galley from the publisher through NetGalley. My review is fair and unbiased.
Read more
44 people found this helpful
Helpful
Report abuse

John David Craycraft
4.0 out of 5 stars The letters are inspiring
Reviewed in the United States on July 18, 2021
Verified Purchase
Someone else noted (…and it is peculiar) that the translators omitted sections of the letters, relegating them to the translator’s commentary. There was an agenda there. Which is ironic because they say practicing accurate journalism requires courage. They could not even show the letters as they actually are rather they needed to omit some things they found “tasteless”. This smacks of ideology.
It was a good read and I am indebted to the translators for their work. Rilke’s words may be useful. I found them inspirational.
Read more
17 people found this helpful
Helpful
Report abuse

M. R. Wilson
5.0 out of 5 stars Timeless wisdom for creative people
Reviewed in the United States on September 10, 2021
Verified Purchase
When I met John Dominic Crossan in 2007, I asked, "What is your favorite prayer?" He replied it wasn't exactly a prayer, but an excerpt from R.M. Rilke's LETTERS TO A YOUNG POET that concerned having patience with life's uncertainties and the value of "living the questions." In Letter 4, Rilke wrote: "Don't search for answers now, because you would not be able to live them....Live the questions now. Perhaps then, someday far in the future, you will gradually, without even noticing it, live your way into the answer."

The power of solitude and immersing oneself in the natural world are emphasized.

This beautiful little volume is easily read in one sitting. I know I will return to its pages again and again.
Read more
2 people found this helpful
Helpful
Report abuse

amba
2.0 out of 5 stars Bowdlerized by the new puritans
Reviewed in the United States on November 5, 2021
Verified Purchase
I was appalled to find that the translators have taken it upon themselves to censor Rilke lest his turn-of-the-20th-century ideas on love, sex, and gender "trigger" some nonbinary young postmodern and make them unable to access the book's creative sustenance. Passages expressing such benighted ideas are not removed entirely (YET—that will be next), but moved to the back of the book where they are **scolded** for their "foolishness." For christ's sake, let Rilke speak in his own words from his own time. Surely we're not so apocalyptically "presentist" that we can't place past ideas in context or admit that our current understandings may not be the final ones, either. Rewriting literature to make it conform to the morals of a different time is wrong in so many ways I don't know where to begin. I'm returning the book.
Read more
20 people found this helpful
Helpful
Report abuse

Darth Amador
5.0 out of 5 stars Great quick read.
Reviewed in the United States on August 25, 2021
Verified Purchase
The thing that strikes out at you, is how young Rilke is when he is writing these letter. The wisdom he writes down is something you expect from someone who has lived a long life.

It also worth noting that a lot of his thoughts were well ahead of his time. It’s funny how a some of his prediction have come true a century later.
Read more
Helpful
Report abuse

M. Snow
5.0 out of 5 stars Wonderful
Reviewed in the United States on June 9, 2022
Verified Purchase
Joanna Macy and Anita Barrows translation is beautiful and, Rilke…wow. So insightful. It’s the sort of book everyone should have on the shelf and pick up to get just the right wisdom at any moment in life.
Read more
Helpful
Report abuse

John W
5.0 out of 5 stars Must read over and over again
Reviewed in the United States on July 17, 2022
Verified Purchase
So many beautiful words and thoughts translated from Rilke's letters. This is a beautiful, inspiring, and sacred book that is meant to be lived with.
Read more
Helpful
Report abuse

Amazon Customer
5.0 out of 5 stars Great read
Reviewed in the United States on July 20, 2021
Verified Purchase
Lovely translation of one of all time favorite books.
Read more
Helpful
Report abuse
See all reviews

Kindle Customer
4.0 out of 5 stars Great read
Reviewed in India on December 23, 2021
Verified Purchase
Easy to understand translation that is relevant to current times. I enjoyed this book but I wonder how much was lost in translation.
Read more
Report abuse
See all reviews