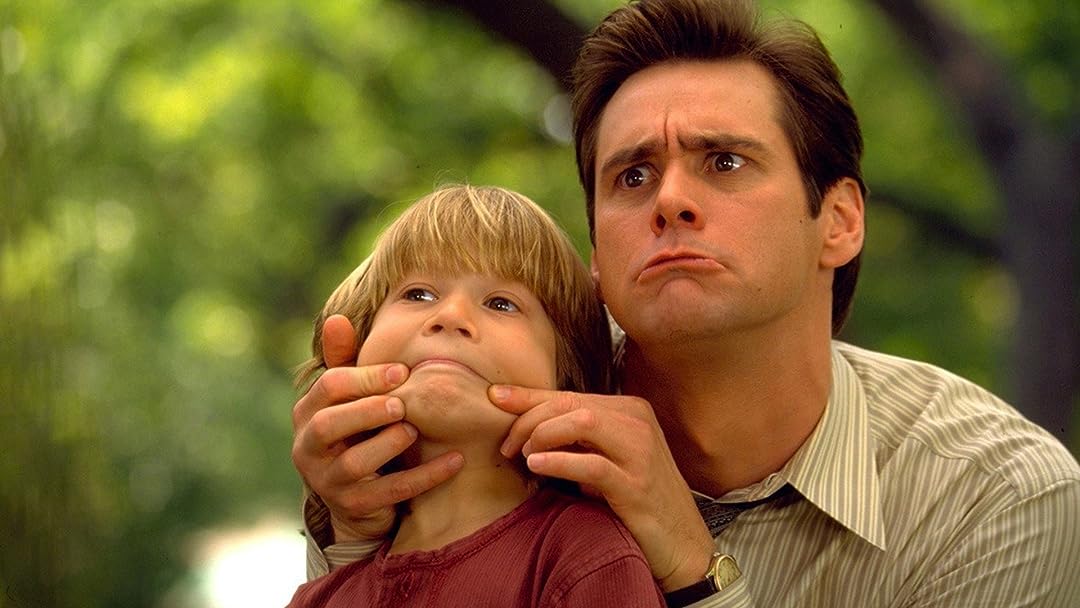 (8,888)
6.91 h 27 min1997X-RayPG-13
A shady lawyer, through a wish from his young son, is compelled to tell the truth - no matter what the situation - with hilarious results! From the director of "The Nutty Professor" and "Bruce Almighty."

Ohio Horticulture GuyReviewed in the United States on February 27, 2020
5.0 out of 5 stars
The pen is REEEEEEEOOOYYYYALLL BLUUEE
Verified purchase
This took me straight back to laughing at Carrey as a kid. Wife and I watched it and I was excited but had that little worry in the back of my mind that it wouldn't be as funny as an adult as it was when I was a kid. WRONG. Laughed my tail off. Good film.
10 people found this helpful

joel wingReviewed in the United States on October 4, 2021
4.0 out of 5 stars
Jim Carrey at the top of his game
Verified purchase
On his birthday Justin Cooper wishes that his dad Jim Carrey can’t lie anymore. That completely changes Carrey’s life who is a consummate BSer. That’s when the laughs in Liar Lair really take off as Carey expresses his every inner thought to everyone he runs into which are usually very embarrassing. Of course Carrey mixes in some physical comedy as well which he was always so good at such as when he tries to say a blue pen is red and it turns on him. In the end this is a family film as Carrey tries to win his son back who he has estranged for being such a bad dad who never tells the truth. If you want to see Carrey at the top of his game Liar Liar is a good start.
3 people found this helpful

krissyjReviewed in the United States on January 18, 2021
5.0 out of 5 stars
Hilarious!!!
Verified purchase
Okay, don't invite over your pastor for this one... But hey, this is Jim Carrey at his finest!! This has to be my favorite Jim Carrey movie of all time! So funny! Not the best for moral quality so you may not show it to your church youth group. But excellent DVD quality and insanely hilarious! Highly recommend! A+++
2 people found this helpful

CaptainAmerica1944Reviewed in the United States on December 18, 2016
5.0 out of 5 stars
MR. REED, MR. REED!
Verified purchase
This movie is incredible and it is at the pinnacle of Jim Carrey's career. It is a great story that also has a serious tone when it touches on what the impact of divorce can have on a family. A hilarious movie with some of the best lines in 90s comedy.
14 people found this helpful

Robert SchafferReviewed in the United States on October 26, 2014
4.0 out of 5 stars
Funny film, poor quality disc.
Verified purchase
The film was a pretty funny Jim Carrey vehicle suitable for the entire family. The concept is that a man's son makes a birthday wish (which comes true) preventing his father (Jim Carrey) from being able to tell an untruth. The problem is that the father of this child is a lawyer. Keeping in mind the old joke: "How can you tell when a lawyer is lying? His lips are moving", you can see how this could become quite an untenable situation for a man in his particular profession.

When all of this takes place, Jim Carrey's character is in the middle of a major court case where honesty is the opposite of what he needs in order to win. Soon a whole collection of humorous situations arise as a result of his inability to lie to friends, co-workers, bosses, judges, spouse, etc.

Although the film was an entertaining comedy, I must report that Universal has done a pretty sub-standard job with the video quality of this disc. I looks like a standard definition DVD, not like an HD DVD should (and, by the way, I should mention that the bluray looks no better than the HD DVD does).

When it comes to Universal Studios titles, some of their discs look absolutely spectacular and others took pretty darned terrible--and there seems to be no way to tell which of the two it will be without first buying the disc, putting it into your player and just plain seeing what it looks like.

This is one of the lesser quality ones. So, be warned that if you already have the DVD and are looking to upgrade the picture quality, you may be disappointed by either the HD DVD or the bluray version; stick with what you've already got unless Universal does a full remaster first. On the other hand, if you don't have this movie at all--and you can get the hi-def version at virtually the same price as the DVD--you may as well go for it.

GladacyaReviewed in the United States on April 5, 2021
5.0 out of 5 stars
Good movie..!
Verified purchase
The topic of the movie is good and Jim Carey does a great job as the lead actor..! I have watched it several times and it is still funny to me. There is at least one scene that I wish that they had left out as it was not needed to make this a good movie, but I guess it makes the portrayal more true to the character of a habitual liar. Other than that, I would recommend.

LaymanReviewed in the United States on February 20, 2017
5.0 out of 5 stars
90s Comedy Classic
Verified purchase
Watched via HD rental. Great quality. Now on to the film review. This is quintessential 90s gold. About a hundred movies came out in that decade about arrogant dads who never paid attention to their kids. Basic story. But this film has Jim Carrey, who elevates every scene to comic absurdity. In 2017 this movie is still genuinely hilarious, even with some two dimensional side characters and a cloying score. Jim Carrey gives his all in this film. His passion and comedy are universal and hopefully will continue to stand the test of time.
9 people found this helpful
See all reviews
Back to top
Get to Know Us
Make Money with Us
Amazon Payment Products
Let Us Help You
EnglishChoose a language for shopping. United StatesChoose a country/region for shopping.
© 1996-2021, Amazon.com, Inc. or its affiliates