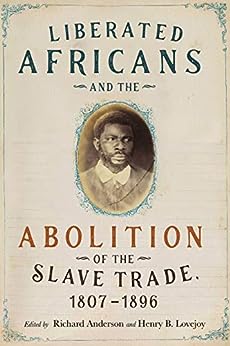 Liberated Africans and the Abolition of the Slave Trade, 1807-1896 (Rochester Studies in African History and the Diaspora Book 86) Kindle Edition

Essays in this collection explore a range of topics relatedto those often referred to as "Liberated Africans"-a designation that, the authors show, should be met with skepticism. Contributors share an emphasis on the human consequences for Africans of the abolitionist legislation. The collection is deeply comparative, looking at conditions in British colonies such as Sierra Leone, the Gambia, and the Cape Colony as well as slave-plantation economies such as Brazil, Cuba, and Mauritius. A groundbreaking intervention in the study of slavery, abolition, and emancipation, this volume will be welcomed by scholars, students, and all who care about the global legacy of slavery.

Next 4 for you in this series See full series
Total Price: $87.96
Books In This Series (19 Books)
Page 1 of 1Start OverPage 1 of 1
Previous page
Next page
Rochester Studies in African History and the Diaspora
Abiodun Alao
Kindle Edition
Create your FREE Amazon Business account to save up to 10% with Business-only prices and free shipping. Register today

Richard Anderson and Henry B. Lovejoy have drawn together a marvelous array of authors that includes many of the best now at work in this area. Liberated Africans will be of interest to Africanists the world over, as well as Caribbeanists, Latin Americanists, and scholars of Atlantic History and African American Studies. ---Peter H. Wood, Duke University --This text refers to an alternate kindle_edition edition.