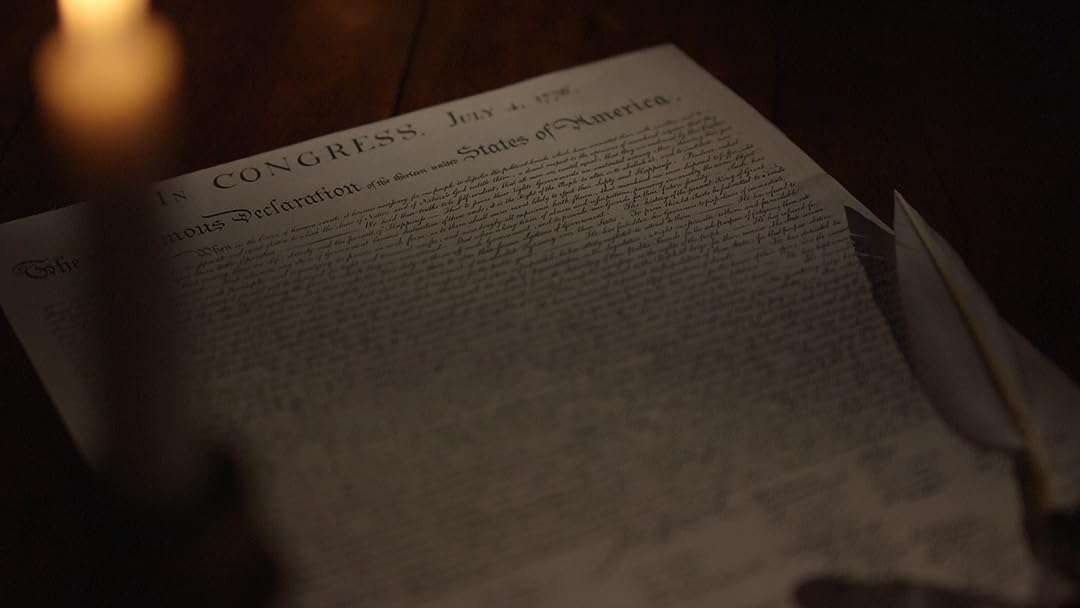 (51)
7.21 h 25 min201613+
Travel with us back in time to better understand the men responsible for America's greatest victories - and most heinous sins. Watch as "Liberty & Slavery" explores the paradox of America's Founding Fathers being champions of liberty - and yet simultaneously champions of slavery.

Lawrence RobertsReviewed in the United States on June 23, 2019
5.0 out of 5 stars
Outstanding in its balance, breadth, and anaysis of a very complex issue - in only 80 minutes.
Verified purchase
I liked this documentary very much. I have studied our founding pretty intensely for the past 4 years in my retirement and had already read the works of several of the people they interviewed in this documentary. I have also seen a half dozen or so documentaries about slavery in America and read several books devoted exclusively to slavery, the slave trade, and the life of slaves in America - also recommend "Sugar Changed the World" which is really about the slavery in the Caribbean Islands - a far uglier story that our own ugly story about slavery I am not going to deal with some of the complaints hurled at the documentary - A Troy Thomas has done that, and I strongly encourage you to go read his replies to the one and two star reviews. I would like to point out the things that I thought were done extremely well: let us start with BALANCE. This doc is neither a slam against our founders, nor an apology for their slave holding lives. The complexity of the world they inherited, their changing views as they aged, and their personal fears and concerns were all handled very well in a relatively short documentary. The end of the movie is done extremely well in this regard - we are reminded that these men were neither perfect nor evil. They struggled with the world they inherited, and their own personal pressures. They did truly believe in personal liberty, did recognize that it could have a different meaning in a nation without slavery, and did manage to leave the door open enough so that slavery could be ended, and a Constitution which protected slavery so that we could actually have a union, could be amended when a very courageous Mr. Lincoln finally decided to touch the third rail of 19th century politics - slavery, and ended it. The next praise I give is ORGANIZATION. The development of slavery, how it encroached so deeply on life in the South especially, and the various aspects of it - whipping, rape, "cheap favors" from masters to get slaves to work harder, and the awfulness of slave trade - it was all touched upon, and in a better than just a light kiss upon the lips of the subject. Many books and many documentaries devoted entirely to any one of these aspects of slavery have been written, filmed. These filmmakers touched them all, in an informative, organized, and analytical manner. That may have been what they did best. The selection of interviewees was excellent. I am familiar with quite a few of them from my studies. But they did not pick out opinion writers from newspapers, or leaders of groups from one extreme side or the other in the very emotional debate that rages today about slavery and its legacy. They selected accomplished authors - most of whom were teachers of history, directors and historian consultants of many of our national parks that honor our founders, and leaders and founders of organizations devoted to the history of slavery. I will next applaud ANALYSIS - they very skillfully cherry picked the analytical statements of their expert interviewees - such we didn't just get the what. We got the why! We got the opinion of these experts, lifetime students of our history or caretakers of the history of the lives of our founders. I have met a couple of these experts personally, and I know, they are so engrossed in their piece of our history that they could talk forever about it. However, the filmmakers here managed to extract those one or two or three, very precise and summary statements of their analysis, that when the documentary got put together with just a few incisive comments from a half dozen or more historians - we got a very thorough and concise analysis of a very complex history. I thought the ending was done extraordinarily well. I will end with HISTORICAL ACCURACY. Since history is passed on to us by others, and some of it can come from original documents, most of it will come from eyewitness accounts. The closer to the subject the eyewitness, the less likely is the "hearsay" factor. I liked their references to original documents - the earlier drafts of documents like the Declaration of Independence, Madison's notes on the Constitution (no official notes were taken by the way, and the Convention was held in total secrecy - so... this is the best we have), But these film makers did an excellent job of tying the recorded thoughts (letters, earlier drafts, etc) to the ultimate result in our founding documents. Their analysis of what the founders may have been thinking, given the changes that were made, and the final words that emerged is very enlightening. Is that analysis correct? Well, if you think it is not - you have been given the information and sources in this documentary to do you own. And I think that is what the best historians do - they present their analysis, and present the sources from which it came. This is an excellent historical documentary. It attempts to embrace a very complex, centuries long and evolving institution, within the context of our founding, and yet to provide some advice as to how we should see that founding today. And it does it in 80 minutes. I will end my review with pretty much what they said about our founders - perfect? No - perfect is hard to find. An extraordinary effort, and one that leaves the door open for more , much more - yes, absolutely. This is a great documentary - you wont learn everything, but... you will learn enough to want to learn more. And you really should not miss watching this.
15 people found this helpful

Darrel KReviewed in the United States on October 23, 2018
5.0 out of 5 stars
Exceptional
Verified purchase
I was very pleasantly surprised by this documentary. This is a true scholarly work. Dozens of historians, ministers, and authors. The production, breadth and depth of information, and collection of experts was all top notch. Incredible really. It's also beautifully filmed. Any one that wants to understand our founding fathers and more importantly our history, warts and all, should start with this film.

Loved this quote from Jefferson: Deep rooted prejudices entertained by the whites; ten thousand recollections, by the blacks, of the injuries they have sustained; new provocations; the real distinctions which nature has made ... will divide us into parties, and produce convulsions which will probably never end...

R. WhiteReviewed in the United States on August 22, 2019
5.0 out of 5 stars
A documentary with dozens of viewpoints
Verified purchase
Very impressed with this documentary, which gave dozens of very well-informed, well-spoken opinions on the conflict of Slavery in early America, all of which paid a great deal of respect to the topic.

I'm reminded of a very striking part, where half a dozen historians and interpreters give half a dozen opinions of what lay behind the "All men are created equal" in the Declaration of Independence. It serves as an important reminder that we don't know what was actually meant by it, and each of those answers gives a different alternative universe into what lay at the foundations of America.

The documentary does an incredible job of LISTENING. It doesn't come to a conclusion, it simply asks some very intriguing questions and lets all the expert voices offer their answers. Very well done.

SJRReviewed in the United States on December 2, 2017
5.0 out of 5 stars
Excellent, balanced documentary.
Verified purchase
Very well-done documentary covering the early history of slavery during the formation of the US. The film included several key points about the founding fathers that generally aren't found in history books, with clear explanations for their point of view on slavery. I thought the film was quite balanced in depicting both sides of this important issue. History buffs, don't miss this one.
17 people found this helpful

Chef EdReviewed in the United States on December 10, 2019
5.0 out of 5 stars
Outstanding balanced and interesting documentary
Verified purchase
I have watched this documentary several times. It clearly shows some of the complexities of the slavery issue during the revolutionary war time in a short time frame. Interviews were done well and different perspectives were well presented in a format that keeps up the viewers interest. While other documentaries show maybe a few view points, this one covers the Founding Fathers view points and complexities in more detail. I only wish I would have been able to watch this documentary sooner, and then study history from there. While the complexities presented may leave to much further pondering and exploration, this documentary moved right along and was very interesting to watch. A must watch for all new and experienced history lovers! Thank you so much for your detailed presentation and research. It has brought bits and pieces learned here and there into one documentary with much clarity of the complex issues.
3 people found this helpful

Margaret OpineReviewed in the United States on November 4, 2020
3.0 out of 5 stars
THANK YOU FOR THE BEAUTIFUL PHOTOGRAPHY (5 STARS)
Verified purchase
GREAT PERFORMERS: 5 STARS
BUT 3 STARS FOR THE ACADEMICS.

We, as a people, are not facing the facts of life:
George Floyd was murdered in a public display.
BUT PEOPLE ARE MURDERED. FLOYD'S DEATH WAS SPECIAL BECAUSE WE WERE
ALL PRESENT WHEN THE MURDER WAS DONE DUE TO VIDEOS. BUT STILL IT
WAS MURDER AND '''PEOPLE''' WILL DO MURDERS...ALL THE TIME, ALL OVER THE PLANET. THE SAME CAN BE SAID FOR '''''''ENSLAVING''''''' PEOPLE. (PLEASE STOP CALLING PEOPLE ''''SLAVES'''').... THEY ARE, THEY WERE, THEY ALWAYS WILL BE '''ENSLAVED''' AND HELD IN BONDAGE: THUS LOSING THEIR FREEDOM AND TORTURED, TORTURED AND TORTURED.
SO..... WHAT IS THE POINT? WHAT IS THE POINT OF DISCUSSING BONDAGE AND ENSLAVEMENT???? THE ABSOLUTE POINT IS: ''WE THE PEOPLE IN THE UNITED STATES OF AMERICA''' HAVE TO DECIDE WHAT KIND OF NATION WILL WE HAVE. WHAT WILL WE ALLOW AND DISALLOW. WHAT WILL WE BE AS ''''''A NATION OF PEOPLE.''''----Mildred Penn Lee, M. A. Cultural Anthropologist
One person found this helpful

JaieReviewed in the United States on November 7, 2018
1.0 out of 5 stars
Boring and repetitive
Verified purchase
I found this boring and repetitive, bringing little additional insight into a very valid question. It makes me suspect the answer is as simple as it looks at first glance: They were greedy, selfish hypocrites.
8 people found this helpful

Richard KoenigsbergReviewed in the United States on November 5, 2018
5.0 out of 5 stars
Brilliant and Fascinating!
Verified purchase
A very intriguing documentary. It goes deep into the issues, turning things over to present many different perspectives. Not a "critique" of the American revolutionaries, but a deep exploration of their thinking and ambivalence.
5 people found this helpful
See all reviews
Back to top
Get to Know Us
Make Money with Us
Amazon Payment Products
Let Us Help You
EnglishChoose a language for shopping. United StatesChoose a country/region for shopping.
© 1996-2022, Amazon.com, Inc. or its affiliates