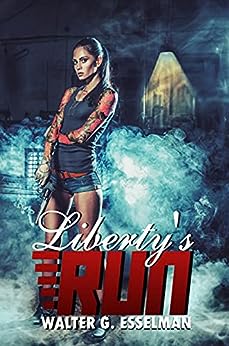 by Walter Esselman (Author) Format: Kindle Edition
See all formats and editions
Sorry, there was a problem loading this page. Try again.

As if zombies crowding the streets wasn’t weird enough, librarian-turned-sniper, Liberty Schonhauer, finds that some darn aliens created the virus that decimated Earth. And now, those very same aliens are about to abduct a boy, Colin, who may hold the key to a vaccine. Not that Liberty would’ve let them have any child, under any circumstances.

Spiriting the boy away, Liberty is quickly joined by the badass Uncle Danny [no relation to them]. The two get the boy to a Fleet of ships, off the coast of Southern California.

Liberty and Uncle Danny, swiftly becoming best friends, start to work for the Rear Admiral of the Fleet.

First to resupply the Fleet with prescription drugs, and then to rescue other survivors. But the aliens have let loose a new complication: predatory alien-birds that are almost as tall as a person, and hunt anything that moves fast.

However, the creatures may not be just vicious fowl.

These new aliens may have an intelligence that rivals our own. Thinking on their feet, the two focus on getting home to Colin; around whom a new family is quietly forming.

Despite all the zombies and aliens, Liberty’s Run strives to take a realistic approach to dealing with an environment like this.

mike wall
5.0 out of 5 stars Zombies and Aliens? Sign me up!
Reviewed in the United States on September 6, 2021
Just a fun, fun story. I love the way Walter writes dialogue. Very believable and helps to quickly get you invested in the characters. Liberty is one of the best, most unique characters you will find anywhere and the book just begs to be adapted as a movie or TV series. Walter continues to be a terrific new voice in the genre. Do yourself a favor and give Liberty's Run a shot!
Read more
Helpful
Report abuse
See all reviews
Back to top
Get to Know Us
Make Money with Us
Amazon Payment Products
Let Us Help You
EnglishChoose a language for shopping. United StatesChoose a country/region for shopping.
© 1996-2021, Amazon.com, Inc. or its affiliates