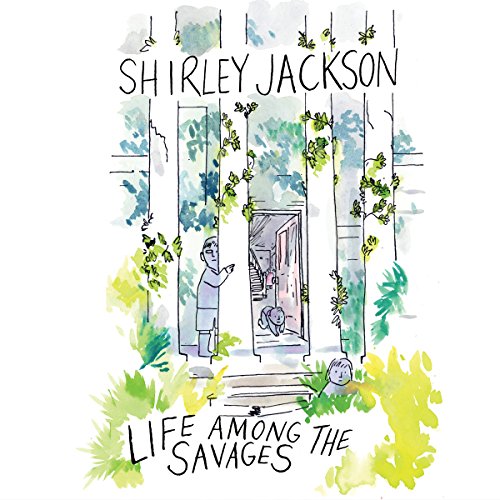 Life Among the Savages

List Price: $34.99
You Save: $5.04 (14%)
By completing your purchase, you agree to Audible’s Conditions Of Use
Sold and delivered by Audible, an Amazon company
Share

4.3 out of 5 stars
4.3 out of 5
321 global ratings
How are ratings calculated?
To calculate the overall star rating and percentage breakdown by star, we don’t use a simple average. Instead, our system considers things like how recent a review is and if the reviewer bought the item on Amazon. It also analyzes reviews to verify trustworthiness.
Top reviews

Allen SmallingTop Contributor: Classical Music
5.0 out of 5 stars If tamed, LOL potential so strong it could power the whole town ~
Reviewed in the United States on October 18, 2017
Verified Purchase
Here's a very funny novel about a mommy, a daddy, a powerhouse-full of children and assorted pets, who give up Manhattan's crowded post-World War II real estate market for the dubious comforts of life in snowy Vermont. The author is Shirley Jackson, usually associated with macabre stories and novels like "The Lottery" and THE HAUNTING OF HILL HOUSE. LIFE AMONG THE SAVAGES is presented as fiction, but many of the incidents in this book seem to have been lifted out of real life in rural Vermont, with her four kids and husband, critic Stanley Edgar Hyman. There's a good chance that when the narrator says things like "I was in bed with a mystery" she meant one she was writing, not reading. And the all-female college hubby teaches at just happens to be Bennington.

But with Shirley Jackson at the wheel, there's usually a shiv or a shiver underneath the domestic goings-on. One housekeeper frosts her cookies with "Repent, Sinner"; another borrows a few bucks and flees town with her felon boyfriend. Another story has the kids all excited about their next visit to "Pudge" over the hill, where the children live beneath the water of the pond and an afternoon visit might take years . . . Sadly, due to multiple addictions to liquor, smoking, pills and even chocolate (obesity), not to mention likely overwork, the real Shirley Jackson did not live to see fifty. How fortunate we are to have not only her scary work but this supremely funny book and its sequel, RAISING DEMONS.
Read more
54 people found this helpful
Helpful
Report abuse

carilynp
TOP 500 REVIEWER
5.0 out of 5 stars Ahead of her time in many ways
Reviewed in the United States on January 9, 2021
Verified Purchase
loved this little book. I have never read any of Shirley Jackson’s books. She was well-known for her novels of terrifying stories, including THE HAUNTING OF HILL HOUSE and THE LOTTERY among many others, but they were never on my reading radar. When I came across her memoir LIFE AMONG THE SAVAGES (1953), it was screaming at me. Not in a horrifying way. More in a quaint family life way.

Jackson is known for literally scaring the daylights out of her readers, however, in her memoir she does quite the opposite. She paints the picture of a life that is chaotic at times, which is expected raising children and trying to manage a career at home (her writing), all the while with a somewhat aloof husband.

Picture a Leave it to Beaver-esque setting where things might look just so from the outside but inside, Jackson cleverly inserts her wry humor to show us that at any moment she might be taken over by her army of children, school clothes shopping that will make you wish you could take her into the future of online shopping, meals to cook that she would rather not, or a furnace about to break, array of books about to topple, or “the husband” also known as “their father” who seems like an accessory they can get on with or without.

Jackson was ahead of her time in many ways. Exhibiting a free-range parenting style, being a WFH woman. And, if the internet had been invented, no doubt she would have teased her book on insta for others to take deep sighs of relief, knowing that they too need not be engaged in mommy wars and instead, spend some me time in a room of your own and the dishes can wait until morning.

Off to read the follow-up, published a few years later, RAISING DEMONS, which is sure to be as delightful.
Read more
4 people found this helpful
Helpful
Report abuse

Tyson
VINE VOICE
5.0 out of 5 stars Wonderful, hilarious, timeless
Reviewed in the United States on December 9, 2016
Verified Purchase
Shirley Jackson is most known for writing what the critics often call the best short story of all time and the best haunted house novel of all time. Lesser known, but no less of an achievement, is Life Among the Savages which could very well be the best novel of parenting anecdotes. Only a master writer can capture the hilarity of child rearing. Shirley Jackson proves herself an historic talent here more than ever. I laughed out loud the whole way through, and I have never raised a child.

Shirley also disproves the theory that adverbs are always a sign of weak writing. With a comedy such as this, at least, she manages to use them to great effect. In fact, the adverb is often the knee-slapping moment in the sentence.

Weekly Reader
4.0 out of 5 stars Daily reader
Reviewed in the United States on December 26, 2016
Verified Purchase
I had planned on reading Shirley Jackson for years and finally picked this one up. 'Life' is not the best example of what you would expect of Jackson's writing but it is a completely enjoyable read. At some point in the novel I began to wonder where the story was going and then just had to get on board and enjoy the ride. Jackson gives her characters heart and empathy...well, except for Laurie...;). I highly recommend this book if only to witness the sturm and drang of life, watch while some other mom can't wait until her kids go to bed andsee how she finds her own secret humor in the ironies life throws at you daily.
Read more
7 people found this helpful
Helpful
Report abuse

Queenie
2.0 out of 5 stars Insipid and frighteningly dysfunctional!
Reviewed in the United States on September 22, 2021
Verified Purchase
I remember reading Haunting of Hill house in my youth and was deliciously frightened. However, I chose this book in my 70s because it was set in New England and humorous. Couldn’t bear it! How could any woman deliberately portray herself as so inadequate and weak? I gave up before I was halfway through… her son very likely murdered her before he reached his teen years.
Read more
Helpful
Report abuse
See all reviews

S Riaz
5.0 out of 5 stars Life Among the Savages
Reviewed in the United Kingdom on October 7, 2020
Verified Purchase
Shirley Jackson is one of my favourite authors and so I was intrigued to give this a try, as it is so different from her usual work. This collection is from lightly fictionalised magazine pieces, written about her family life in the 1950's, with (by the end of the book) four children and husband, critic Stanley Edgar Hyman.

This is the 1950's so parenting was a little more relaxed then, to put it lightly. No seat belts, cigarettes packed as part of your maternity bag, and other such facts, put this firmly in the past. Other stories, though, are still quite resonant. Like the time when Shirley's son comes home, claiming to have been attacked by another boy and she is pushed into calling the boys mother. After a fraught argument, the two find themselves standing the store the next morning and immediately agree at who was really at fault.

Although this shows a totally different side to Shirley Jackson, she retains her sharp wit in this. As when discussing how hopeless she was at housework and how utterly useless she was at getting help. One girl responded to, "an ad I put in the paper, and someone apparently read it to Hope," the author slyly remarks. Very Jackson.

From moving house, to a trip to a department store, bats, cats and chipmunks, I adored this book. I am pleased that the second book of memoirs, "Raising Demons," is going to be re-published next year on kindle and look forward to reading on. Shirley Jackson never fails to delight me.
Read more
3 people found this helpful
Report abuse

Amazon customer
5.0 out of 5 stars Great book 📚
Reviewed in the United Kingdom on August 6, 2020
Verified Purchase
Awesome book. I have always loved horror short stories by Shirley Jackson. The atmosphere she crafts masterfully is both mundane and dark. The evil of the every day life and places. “Life among the savages” is her autobiography that is part fictional to increase the comic effect. “I stood terrified before my own children,” is a quote I’m going to remember.
Read more

5.0 out of 5 stars Great book 📚
Reviewed in the United Kingdom on August 6, 2020
Awesome book. I have always loved horror short stories by Shirley Jackson. The atmosphere she crafts masterfully is both mundane and dark. The evil of the every day life and places. “Life among the savages” is her autobiography that is part fictional to increase the comic effect. “I stood terrified before my own children,” is a quote I’m going to remember.
Images in this review

Paul
1.0 out of 5 stars Charity shop pile
Reviewed in the United Kingdom on December 30, 2019
Verified Purchase
I heard a review on the radio which said this was very funny. That might well be the case as I didn't get past page ten without feeling completely disconnected from the main character, the writing and the premise of the novel.
Read more
One person found this helpful
Report abuse

hannah
3.0 out of 5 stars The book making you anxious and yet nothing happens
Reviewed in the United Kingdom on July 15, 2020
Verified Purchase
It was an ok book. What struck me is that this book made me feel anxious reading it, the main characters’ life is chaotic yet not much happens, it perfectly depicts family life but there is no punch line, and no significant events, not worth the read in my opinion
Read more
One person found this helpful
Report abuse

M Pritchard
5.0 out of 5 stars Understanding of Mother's
Reviewed in the United Kingdom on December 19, 2019
Verified Purchase
A good wee read with many a laugh and much appreciation of what it is to be a busy Mother juggling all manner of things. Not just Mothers but the relationship Father's have too and how each child in their own way can wrap themselves round your little finger, sometimes and mostly when you aren't looking.
Read more
One person found this helpful
Report abuse
See all reviews
Back to top
Get to Know Us
Make Money with Us
Amazon Payment Products
Let Us Help You
EnglishChoose a language for shopping. United StatesChoose a country/region for shopping.
© 1996-2021, Amazon.com, Inc. or its affiliates