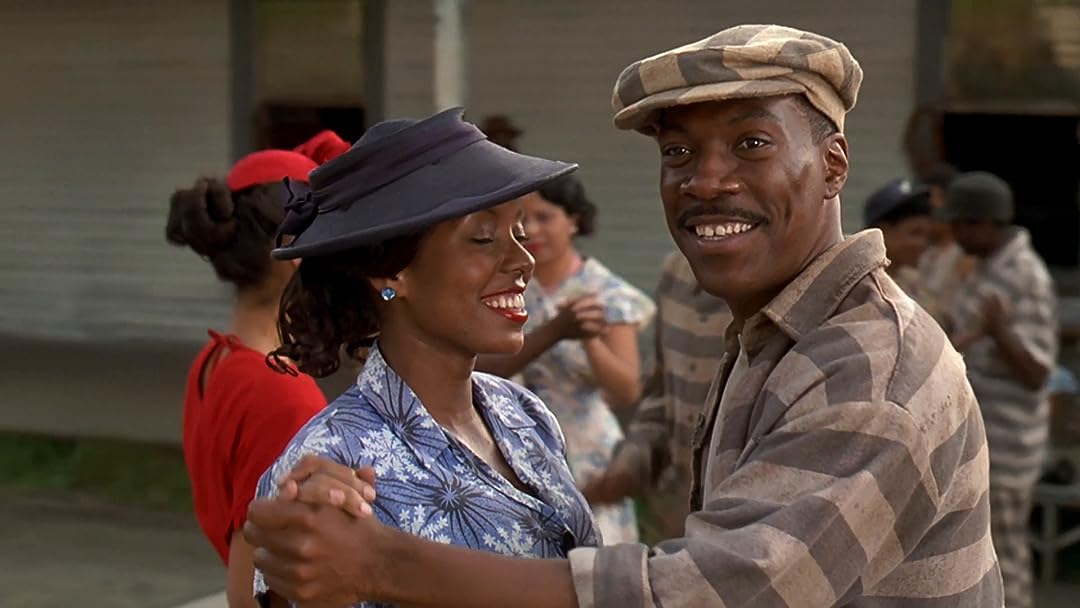 (14,131)
6.71 h 48 min1999X-RayR
In Depression-era Mississippi, two black men are framed for murder and sentenced to life in prison - and they spend the next 60 years bickering, arguing, and planning their big escape.

joel wingReviewed in the United States on June 18, 2020
2.0 out of 5 stars
Couldn't make light of the racist justice system in the South
Verified purchase
Here’s the problem with Life. It took a very serious topic, a racist criminal justice system in the south and chose two comedians Eddie Murphy and Martin Lawrence to be the main characters. Could they make light of the tough situation they find themselves in getting life in prison in Mississippi for a crime they didn’t commit? There are a couple laughs here and there, but it’s really not a comedy. What you do get is how blacks were forced into chain gangs to do hard labor. How racist guards ran the prison system, etc.
C
12 people found this helpful

Peter Smith a.k.a I Love the Butler BulldogsReviewed in the United States on July 15, 2020
1.0 out of 5 stars
TOO DEPRESSING & TOO SATANIC!!!!!!!!!!!!!!!!!!!!!!!!!!!!!!!!!!
Verified purchase
Last Night, I was poking around here on Amazon looking for something funny to watch so I picked this movie out because I have always liked Eddie Murphy's movies ever since I was a little kid. I didn't think that this movie was funny at all. It especially did NOT cheer me up during this whole COVID-19 pandemic. In my book, this movie is somewhat similar to what's going on during this never ending COVID-19 pandemic. But Yet, I should say that watching this movie did teach me a lesson of what is going on in today's world, and that is "If you break the law, you there are penalties to pay. It was a total waste of good talent of one of my favorite comedians.
3 people found this helpful

kelleyReviewed in the United States on December 13, 2019
5.0 out of 5 stars
I've watched this literally over 100 times!
Verified purchase
LOVE THIS MOVIE! I've watched it since I was younger and still watch it for a good laugh from time to time. The beginning may start off slow for some, but well worth the watch! Eddie and Martin are great in this movie! I can recite the lines I've seen this so much and often reference lines from ghe movie in real life. It's a hit!
6 people found this helpful

Abdulla M. Al QasimReviewed in the United States on September 11, 2011
4.0 out of 5 stars
Whites Only Pie!
Verified purchase
For those of you have seen the movie, I'm sure you've laughed out loud when that statement in the title of my review was made and for those who are about to see it... I'm sure you're going to laugh your heads off!

I have to agree with the review by Daniel Jolley in that it is a movie with a very strong message but with some seriously funny scenes throughout the entire movie right to the end!

The movie revolves around the racial discrimination in the US's past and the principle of justice and how sometimes justice can take its own time getting there, but it does get there.

This movie is one of Eddie Murphy's greatest works ever and I also found that Marin Lawrence, for change, was not playing an idiotic comedic role where he is just there to get laughs! There is also a multitude of great actors supporting the lead two actors, for me one of the funniest has got to be Bernie Mac! Especially the scene where Bernie Mac tries to warm up to Martin Lawrence for all the wrong reasons and then Martin's reaction once he realizes!! Jingaling!!

PATOLAReviewed in the United States on January 16, 2016
5.0 out of 5 stars
A Heavy Story Line With Expert Comedy Relief
Verified purchase
It takes incredible thoughtfulness and skill to make a movie with an overt racial story line that infuses high-end comedy just at the right moments. Just when the story becomes heavy, it expertly pivots to comedy relief that gives you a full belly laugh.

The chemistry between Eddie Murphy and Martin Lawrence is evident as their characters go through some hilarious growing pains while spending 65 years in prison for a crime they didn't commit.

The cast is full of the who's who of actors: Obba Babatunde, Bernie Mac, Anthony Anderson, Miguel Nuñez, Ned Beatty, Rick James and many many others.
11 people found this helpful

TabbyReviewed in the United States on December 13, 2018
5.0 out of 5 stars
Great movie
Verified purchase
I can't believe I didn't know about this movie until now, but I'm glad I watched it! Hilarious.
13 people found this helpful

SamReviewed in the United States on March 1, 2012
5.0 out of 5 stars
LIFE Worth the time & money
Verified purchase
Eddie Murphy is probably one of the most underrated actors on American cinema. Even his Oscar nomination for his dramatic role in the award winning film Dreamgirls didn't seem to dispel this myth. However, over the years he has proven himself to be a consummate actor of the highest quality and is again displayed in this little 1999 gem that most of the world ignored at the time it was released. LIFE is a landmark film for Murphy as we watch his character grow and develop through an entire lifetime of mishaps, stumbles, failures, successes, goodness, happiness and deep despair. One of the best films in his long list of endeavors, LIFE is a must see movie for those who appreciate quality of workmanship in cinema. The supporting cast of Martin Lawrence (who delivers a stellar performance), Bernie Mac, Obba Babatundé, Ned Beatty, and so many more talented character actors, makes LIFE one of the premiere movies in my collection.
6 people found this helpful
See all reviews
Back to top
Get to Know Us
Make Money with Us
Amazon Payment Products
Let Us Help You
EnglishChoose a language for shopping. United StatesChoose a country/region for shopping.
© 1996-2022, Amazon.com, Inc. or its affiliates