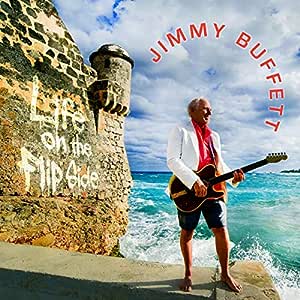 Life On The Flip Side

The first studio album from Jimmy Buffett and the Coral Reefers in seven years! 64 page booklet featuring exclusive content including lyrics, special photos from Jimmy's collection, his stories behind the songs, and more! Parrotheads will have something special to cheer about when Jimmy Buffett's first studio record in seven years, Life on the Flip Side, is released on May 29th, 2020 on Mailboat Records. Jimmy performed some of the songs earlier in the year, surprising fans with a special show in Key West, where the album was recorded!

4.8 out of 5 stars
4.8 out of 5
603 customer ratings
How does Amazon calculate star ratings?
Amazon calculates a product’s star ratings based on a machine learned model instead of a raw data average. The model takes into account factors including the age of a rating, whether the ratings are from verified purchasers, and factors that establish reviewer trustworthiness.
Top Reviews

DVD reviewer
4.0 out of 5 stars Seven strong songs, three decent, two meh, one okay, and one won't play
Reviewed in the United States on May 30, 2020
Verified Purchase
As a big Jimmy Buffett fan I was looking forward to this release. When the CD arrived I couldn't add it to my iTunes because the first song had data corruption. It won't play, so I can't say how good the song is because all I heard was the amazon preview. I was able to play the other songs by downloading them individually. I'm returning the CD for a replacement; hopefully it was an aberration and not a widespread encryption problem at Mailboat Records. As for the album, I was happy with it. By now you know the Buffett album formula. You get some upbeat but relaxed island-rhythm laissez-faire songs ("Who Gets to Live Like This," "Hey, That's My Wave" and "Down at the Lah De Dah" if the preview is any indication), a few slower and thoughtful ballad-style songs ("Book on the Shelf," "The Slow Lane," "Slack Tide"), a few offbeat lyric songs set to old-school beats Buffett once described as "tap-dance songs" ("Mailbox Money," "Half Drunk"), an old rocker song ala "Livingstone Saturday Night" ("The Devil I know"), a flat-out goofy song ("Cussin' Island"), change-of-pace song ("15 Cuban Minutes"), and a few "message" songs ("Oceans of Time," "Live, Lit It's Your Last Day"). Often it takes a few plays for all the songs on a Buffett album to grow on you, but I instantly liked tracks 2, 4, 7, 9, 10, 11, and 14. And I think that first unplayable song probably fits in that category as well. This one's going to get a lot of play.
Read more
17 people found this helpful
Helpful
Comment Report abuse

Tejas Oasis Tech Reviews
5.0 out of 5 stars Nothing's more timeless than a Jimmy Buffett song!
Reviewed in the United States on June 4, 2020
Verified Purchase
At the time of my own review, there were eleven others, almost all five star reviews. There was one (a two star) which claimed that the the music was out of touch with the times. But get real, dude.

There's nothing more timeless than Jimmy Buffett and this is definitely very, very good Jimmy Buffett. I will definitely be listening to this over and over. It will be part of my continuous play list. Way to go Jimmy.

VITSOL
5.0 out of 5 stars He's back!
Reviewed in the United States on June 6, 2020
Verified Purchase
I have not bought a new studio CD from Jimmy Buffett in 14 years, since I skipped his last two releases. This one is his best one that he has done since Fruitcakes, and has a lot of the same feel. There is a wide variety of styles, with the country influence being greatly reduced. The lyrics ride the highs and lows with the tides. Originally, this one was going to be called Oceans Of Time after one of the songs here. The new title is part of one of the other lyrics. This CD also comes with a nice fat little book with the lyrics and explanations of each for inspirations. He has quite a few co-writers on this one, so for those who don't like these lyrics, don't blame Jimmy. The cover photo was obviously shot at Fort Jefferson that is only accessible by boat or seaplane from Key West.
Read more
8 people found this helpful
Helpful
Comment Report abuse

James D. Fisher Jr.
5.0 out of 5 stars Great album
Reviewed in the United States on May 31, 2020
Verified Purchase
First Jimmy Buffett studio recording I have bought since License to Chill in 2004 and that was duets.This really brings it all back to 1978 when first caught him on the Son of a son of a Sailor tour .This is a great recording.It just brings it all back why I love his music.Thanks Jimmy!
Read more
10 people found this helpful
Helpful
Comment Report abuse

Amazon Customer
4.0 out of 5 stars Pretty Darn Good
Reviewed in the United States on June 15, 2020
Verified Purchase
It's a pretty darn good collection of songs. If you like "Country Jimmy", you'll get a big dose here. Other than 15 Cuban Minutes, I did not hear much "Island Jimmy". Although my preference is for Island over Country, I still think this is a high-quality piece of work overall.

The CD I received is high-quality - it all plays just fine. The production mix seems a bit higher-quality than we usually hear from a Buffett CD, so that's an added bonus.

William E. Adams
5.0 out of 5 stars Gonna give this five stars, being just a tad generous...
Reviewed in the United States on July 1, 2020
Verified Purchase
While none of these songs are going on to become icons of Buffett's career, I actually like every one of them. This is the first Buffett album I have bought in a dozen years at least, although I became a big fan back in the mid-1970's when he released "A1A" and through the decades likely purchased six or eight more. Most of the songs on this new one are upbeat and well-sung and excellently backed. I never got to see JB in concert except on television, but this new effort rewards repeated play and won't disappoint most long-time fans or newcomers.
Read more
4 people found this helpful
Helpful
Comment Report abuse

C. Perry
4.0 out of 5 stars Good, SOLID Album
Reviewed in the United States on June 2, 2020
Verified Purchase
My wife and I both think this is one of Buffett's better albums. MUCH, much better (in our opinion) than Barometer Soup, Banana Wind, and Fruitcakes, and on a par with his last three albums.
Read more
5 people found this helpful
Helpful
Comment Report abuse

william k. watson
5.0 out of 5 stars All new, diverse styles, & pure Jimmy!!!
Reviewed in the United States on May 31, 2020
Verified Purchase
Just listened to the whole album yesterday and was so happy to hear Mr. Buffett (sorry Jim) in all the styles we know and love!!!
Read more
5 people found this helpful
Helpful
Comment Report abuse
See all reviews from the United States