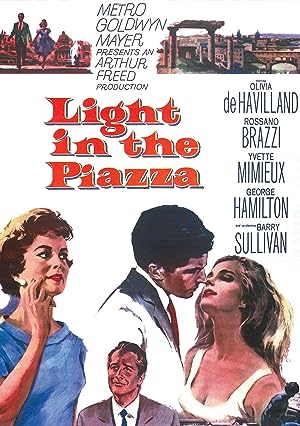 Light in the Piazza

(291)
6.91 h 41 min1962NR
Meg Johnson is eager to discover the glories of Italy with her beautiful daughter Clara, who was mentally impaired in a childhood accident.

H. KlickReviewed in the United States on May 10, 2019
5.0 out of 5 stars
Love in Italy
Verified purchase
Loved this movie. Set in Italy the countryside is so beautiful.
Have watched this movie more than twice.
Enjoyed the scenes with George Hamilton and Yvette mimeux.
Love finds a way no matter what age you are or mental condition you have.

ColleenReviewed in the United States on December 13, 2019
5.0 out of 5 stars
A forgotten gem of a movie!
Verified purchase
A very touching story beautifully portrayed by the all the actors especially the lovely Yvette whom I feel was always underrated in her acting career. The essence of family life in Italy and the Italian scenery are beautiful and add so much richness to this film. A forgotten little gem!
3 people found this helpful

SHOPFREAKReviewed in the United States on September 5, 2021
4.0 out of 5 stars
Tender love story set in gorgeous Rome
Verified purchase
A childlike young woman tours Rome accompanied by her overprotective mother. she and a handsome Italian boy fall in love, the boy being unaware of her limitations. Mom tries to end the romance, Dad wants to put the girl in a special school .Buy this DVD to see how it all ends.

N. DoyleReviewed in the United States on January 7, 2012
5.0 out of 5 stars
Like fine wine...a film that gets better with time...
Verified purchase
I have just seen the REMASTERED EDITION (from Warner Archives) of the recent DVD for LIGHT IN THE PIAZZA which came out a few months ago.

Olivia de Havilland is a worried mother travelling through scenic Italian locations with daughter Yvette Mimieux, who is mentally retarded. When a young Italian starts courting her daughter and showing up in the most unlikely places, de Havilland's predicament becomes apparent. Should she tell the truth or let her daughter marry the rather simple-minded Italian boy? It's a predicament that is nicely solved by the time we get to the fadeout with de Havilland declaring: "I did the right thing...I know I did."

Under Guy Green's direction, and photographed with gorgeous images of Italy's landmarks in Rome and Florence, the latest DVD transfer of "Light in the Piazza" is a sight to behold. And the intimate story of a mother's wish to find happiness for her daughter rather than giving in to the idea of shutting her away, is told with a good deal of humor and charm thanks to splendid performances from the stars and an intelligent script.

The Epstein brothers have given the screenplay some grace and humor--and de Havilland is superb as the doting mother. Rosanno Brazzi adds his brand of charm to the boy's father and there is a light touch of romance between him and de Havilland.

George Hamilton is surprisingly convincing and utterly charming as the smitten Italian youth, Yvette Mimieux shines as the girl and Barry Sullivan does what he can with the thankless role of her stubborn father who would rather see her placed in an institution. All of it is nicely photographed in Italian locales and in wide-screen Technicolor (see the letterbox version if you can).

This unappreciated film is a minor gem--poignant, touching and humorous. Olivia de Havilland, decked out in a Christian Dior wardrobe, is very attractive in one of her best mature roles. Her chemistry with Rossano Brazzi is so strong that you wish more had been made of the romantic feelings developing between them, but all of their scenes together are expertly played with fine nuances.

I would've gladly paid a dollar more for a disc that would last forever. Instead they burned the movie on the old-fashioned, purple dye type disc that's only good for around 5 - 7 years.

Anyway, this is a different kind of love story that I think you will enjoy. Great story and excellent acting.
5 people found this helpful

tcasaReviewed in the United States on August 14, 2012
4.0 out of 5 stars
Light in the Piazza
Verified purchase
This is one of my favorites. A mother visits Italy with her grown mentally challenged daughter. Due to a riding accicdent her daughter is a perpetual child in a woman's body. Enter a young Italian man who is captivated by the daughter's beauty and innocence. At first the mother discourages the romance, but she is conflicted. She has always hoped that her daughter will overcome her disability to live a full and "normal" life. Eventually, she gives in, but will she tell the Italian family why her daughter is so innocent and naive?
10 people found this helpful

JR 1976Reviewed in the United States on May 4, 2021
4.0 out of 5 stars
Lighted Piazza
Verified purchase
Was a good movie to watch but didvdrag a little bit. For the time, it was nice to see. George Hamilton's break out role I believe. He does a great job and is nice to look at as well. So not bad if you like a young George Hamilton.
See all reviews
Back to top
Get to Know Us
Make Money with Us
Amazon Payment Products
Let Us Help You
EnglishChoose a language for shopping. United StatesChoose a country/region for shopping.
© 1996-2022, Amazon.com, Inc. or its affiliates