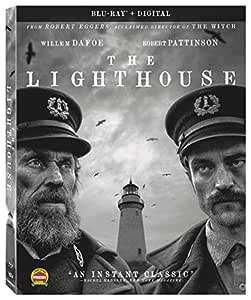 Two lighthouse keepers try to maintain their sanity while living on a remote and mysterious New England island in the 1890s.

Two lighthouse keepers (Robert Pattinson and Willem Dafoe) fight each other for survival and sanity on a remote and mysterious new England island in the 1890s. From Robert Eggers, the visionary filmmaker behind horror masterpiece 'The Witch'.

3.7 out of 5 stars
3.7 out of 5
1,790 customer ratings
How does Amazon calculate star ratings?
Amazon calculates a product’s star ratings based on a machine learned model instead of a raw data average. The model takes into account factors including the age of a rating, whether the ratings are from verified purchasers, and factors that establish reviewer trustworthiness.

Mat
5.0 out of 5 stars Broke: spilling tea. Woke: spilling beans.
Reviewed in the United States on December 21, 2019
Format: Prime VideoVerified Purchase
I couldn't have had any higher expectations. Ever since the first photo came out in April I was hooked. Even before my first showing in October, I waited in line for 3 hours chilled to the bone after a Bomb Cyclone hit Boston and almost didn't make it in for the free premiere. I was the last person allowed in and everyone else was turned away. By some strange turn of fate, I was destined to see this.

I can, fortunately, say that my expectations were met and exceeded. The aesthetics and camerawork of the film are sublime, if you've seen the trailer that's clear. All of the buildings featured including the titular lighthouse were all constructed on-site. The chemistry between Dafoe and Pattinson is incredible, definitely giving the performances of their careers. The story is... Something I need a few more viewings to completely wrap my head around. But much like The Witch, I can see that some people might be a bit off-put by how it ends. Overall I loved it though.

The Lighthouse is a movie about identity, sanctity, and insanity. A wonderfully maddening journey I'm looking forward to taking again as soon as possible.

rsmacleod
1.0 out of 5 stars Dark, gloomy, utterly depressing movie about two crazy men going even crazier.
Reviewed in the United States on December 26, 2019
Format: Prime VideoVerified Purchase
Yes, I am sure the true film experts loved the grainy texture, cropped frames and atmospheric soundscape that were all very artistic and certainly unusual. The acting was compelling. However, the plot was just bizarre interactions heaped on deep psychological disorders, spiced with a sordid past that seemed very worth escaping. Perhaps there are deeper interpretations about the sexual nature of lighthouses, another strange subplot, but it just did not seem very relevant to anything. One cour not help but cheer on the seagulls. Beware, this movie neither answers any questions nor poses any worth answering.
Read more
146 people found this helpful
Helpful
Comment Report abuse

Willem Dafoe and Robert Pattinson give incredible performances, Willem in particular deserves an Oscar nomination. The cinematography is rich and purposeful, with details hidden in the frame that you can catch on repeat viewings. The tone of this film is completely unique, and you understand it from the way the director incorporates the beautifully composed score that is haunting and perfectly compliments the imagery associated with it.

The closest film I can compare The Lighthouse to is The Shining, both in terms of the atmosphere it presents, the story it tells, and the mastery of its execution. Robert Eggers has proven to be possibly one of the most talented directors working today.

The pace is not for everyone, but I recommend everyone not just watch this movie, but experience it. It's unique and whether or not you like it by the end, you will definitely find some moments etched into your brain for the next few weeks.

Jake
5.0 out of 5 stars AMAZING
Reviewed in the United States on December 20, 2019
Format: Prime VideoVerified Purchase
Might be my favorite movie of all time -- a love letter to sailor stories and the salty depths of male psyche.
Read more
81 people found this helpful
Helpful
Comment Report abuse

Denise Ferguson
1.0 out of 5 stars Absolute Trash
Reviewed in the United States on December 21, 2019
Format: Prime VideoVerified Purchase
Wow, that was awful! None of the movie makes sense. It is absolute trash. I have no idea what I just watched. It was a waste of my money. How in the world did this get such a high rating? I couldn't rate it less than 1, but I would if I could.
Read more
75 people found this helpful
Helpful
Comment Report abuse

James F.
3.0 out of 5 stars Badly in need of an editor
Reviewed in the United States on December 25, 2019
Format: Prime VideoVerified Purchase
First off, the performances are top-notch. I wouldn't have thought that Robert Pattinson had acting chops on the same level as Willen Dafoe, but both men are outstandingly good in the film.

That said, this really strikes me as an overly long slog where professional critics feel the need to declare it wonderful so they can feel better about themselves that they somehow really understood a meandering, impregnable movie. I am usually a fan of dense, hard-to-access stories that become more immersive and tightly knit after a second or third viewing but this is not that kind of film. It's actually easier to understand if you watch the trailer, and then skip over the first hour of the movie. That to me says the film badly needs cutting and the director was so in love with the photography that he lost any semblance of coherency.

It is gorgeous to look at, and again, the characters are incredibly well played, but I can't quite shake the feeling that if every scene was shortened by 50%, this would have been an incredibly taut, riveting thriller. As it is, it's too overly dull, plus has too many scenes dissecting Dafoe's character's penchant for the occasional fart.

Great premise, the most beautiful photography in a film I've seen in a long time, excellent performances, all ruined by a director that wants. . .to. . .linger. . .so. . .long. . .on. . .every. . .single. . .shot. . .
Read more
69 people found this helpful
Helpful
Comment Report abuse

Shannon Scott
5.0 out of 5 stars Black & White 35MM Meets Melville Madness
Reviewed in the United States on December 22, 2019
Format: Prime VideoVerified Purchase
Seeing this film made me wish for more true 35MM Black & White films! If you didn't know it was made recently or anything about the actors you'd think it was some Italian or for that matter, Japanese masterpiece from the 1940s or 1950s. It had such visually stunning scenes and psychological lighting. The acting is spot on and Pattison is officially a man and far removed from the teen films we shall not mention here. He was made for this film. Dafoe too but none of us are surprised. He was sublime and his face hasn't looked this terrifying since Shadow of The Vampyre or Lost Highway. This is an incredibly mental film so if you're expecting something soft for the mind, this isn't it. Hate to seal its fate by calling it an art film, but its a high art film. I personally enjoyed the allegorical concepts, the dream sequences and all of the God vs Man narratives. I think its only shortcoming was not having another 30 minutes to really build more on some of the reflective aspects but here nor there. Very least you'll be able to say you saw mermaid labia and a sex scene with a mermaid!
Read more
48 people found this helpful
Helpful
Comment Report abuse
See all reviews from the United States

Valeria
5.0 out of 5 stars Everything
Reviewed in Mexico on March 20, 2020
Verified Purchase
🥳
Read more
Helpful
Sending feedback...
Thank you for your feedback.
Sorry, we failed to record your vote. Please try again
Report abuse