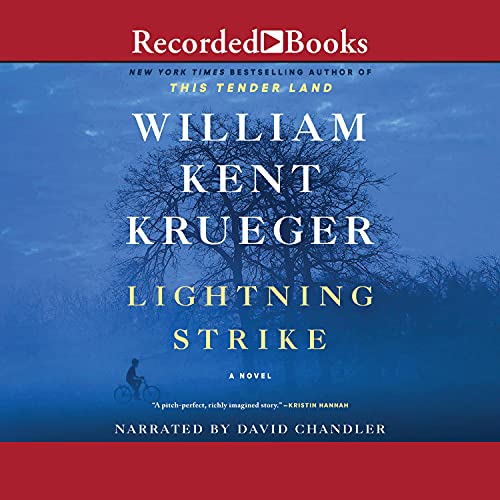 The author of the instantNew York Timesbest sellerThis Tender Landreturns with a powerful prequel to his acclaimed Cork O’Connor series - a book about fathers and sons, long-simmering conflicts in a small Minnesota town, and the events that echo through youth and shape our lives forever.

Aurora is a small town nestled in the ancient forest alongside the shores of Minnesota’s Iron Lake. In the summer of 1963, it is the whole world to 12-year-old Cork O’Connor, its rhythms as familiar as his own heartbeat. But when Cork stumbles upon the body of a man he revered hanging from a tree in an abandoned logging camp, it is the first in a series of events that will cause him to question everything he took for granted about his hometown, his family, and himself.

Cork’s father, Liam O’Connor, is Aurora’s sheriff, and it is his job to confirm that the man’s death was the result of suicide, as all the evidence suggests. In the shadow of his father’s official investigation, Cork begins to look for answers on his own. Together, father and son face the ultimate test of choosing between what their heads tell them is true and what their hearts know is right.

In this masterful story of a young man and a town on the cusp of change, beloved novelist William Kent Krueger shows that some mysteries can be solved even as others surpass our understanding.

Special invitation from Audible!
Learn more about Membership
List Price: $27.99
You Save: $3.50 (13%)
By completing your purchase, you agree to Audible’s Conditions Of Use
Sold and delivered by Audible, an Amazon company

Amazon Customer
4.0 out of 5 stars Cozy mystery, hf, and coming-of-age novel all in one!
Reviewed in the United States on August 25, 2021
🎉🎉𝑯𝑨𝑷𝑷𝒀 𝑩𝑶𝑶𝑲 𝑩𝑰𝑹𝑻𝑯𝑫𝑨𝒀!!!🎉🎉!!!💯𝑊𝑖𝑙𝑙𝑖𝑎𝑚 𝐾𝑒𝑛𝑡 𝐾𝑟𝑢𝑒𝑔𝑒𝑟 has quickly risen to the top of my must-read authors list. A master storyteller, Krueger lures his readers in with his lyrical descriptions and imaginative narratives.✔His newest novel is no exception... a mosaic of cozy mystery, historical fiction, and coming-of-age adventure - this one has it all! I was intrigued from the get-go as I followed young Corcoran O'Connor through the winding road to his discovery alongside his dad. With a motley cast of characters, this novel moved along at a quick clip and had some unexpected surprises en route. I appreciated that there was plenty to throw me off the scent and each time I had someone pegged, I turned out to be wrong.🤷‍♀️I must admit, I'm not much of a cozy mystery reader, but now, thanks to Mr. Krueger, I can certainly understand the lure. To boot, I learned quite a bit about the Indian Relocation Act of 1956 and what it did to the Native American Community... so incredibly tragic.
Images in this review

linda galella
HALL OF FAMETOP 10 REVIEWERVINE VOICE
4.0 out of 5 stars Everything you want in a mystery and
Reviewed in the United States on August 24, 2021
Verified Purchase
so much more, “Lightning Strike” is an amazing combination of family relationships, social commentary and well crafted mystery.

I’ve been wanting to read this series for a long time and this was the place to start - book 17 is a prequel and a stand alone novel. It begins in 1989 with the protagonist, Cork, starting his first day as sheriff. Only 2.5 brief pages to set the stage and he’s reminiscing about how he got where he’s at and who it was that paved the way. We’re off to 1963…

Sheriff Liam O’Connor, Cork’s father, is tasked with solving an highly charged death that he has called a suicide but the victim’s family is certain something nefarious has happened. The family is Native American and they’re issues between the tribal leaders and the town’s elite. Cork, his Mother and Grandmother are First Peoples. Oh, and guess who found the body? Oh yeah, this is Cork’s first mystery to be solved.

W. K. Krueger’s writing is atmospheric when describing the setting. I could smell, taste, feel, hear everything. On the other hand, I struggled somewhat with the investigation because the racial issues were too woke for 1963. I applaud Krueger for his dedication to Native American issues and for the prologue with historical information but 2021 BLM fodder doesn’t belong in this story.

I waffled between 3-4 stars and opted for kindness because so much of this book really is exceptional. I’m going to give book 1 a fair read and hope this political mishap was an aberration. The back stories on Cork and Liam were really woven together wonderfully as were the relationships between Cork and his buddies.

This is a mystery that’s built in layers but it’s not a hard core procedural. Cork and his friends are young teenagers who make horrifying discoveries; some by accident others purposeful. He’s got that gladiator heart that is unique to boys of that age.

3.5 stars rounded up because it will make me much more grounded when starting the series📚

ZenReader
3.0 out of 5 stars Way too familiar --- same old formula
Reviewed in the United States on September 9, 2021
Verified Purchase
I've read the entire series to this point. Unfortunately for me this is the end of the road. Even though our hero is 12 years old he's still the same old character. Along comes the old wizen tribe elder who does his impression of the riddler and gives probably the worst advice he's ever given if you believe out hero is 12. Like why does anyone ever ask Henry anything is beyond belief. As Dad as he's known in this one -oh please, he's a one dimensional robo doll with a persecutions complex. His angst over the ever nutty tribes feelings for him is boring nonsense. Gee they don't like me cause the don't trust me? What, why? Its tiring. Its all so "well their Indians so...blah blah blah." This is probably too harsh since I'm really sad the series is obvously at an end with the author phoning in the thin rehashed plot lines and characters. I would not recommend this one to anyone. The first 16 books, hell yeah they were great. This "yawn". Or as Henry would say "Book is wood, look deeply in the grain to learn the truth, wood and paper are one grasshopper." No wait that was Kung Fu. Henry say "Check out the loose ends 12 year old. You go find out who murdered him". Has Kent ever met a real live 12 year old? Henry should of told Cort, "Stop eating your own snot kiddo and leave it up to your Dad, like he's the sheriff". What nonsense.
Read more
19 people found this helpful
Helpful
Report abuse

mbl
5.0 out of 5 stars One of the Best
Reviewed in the United States on August 27, 2021
Verified Purchase
I’ve read every book in this series and this was one of the best. I loved the insight on how Cork was raised and what is up-bringing was like. The details once again pulled me in and made me feel like I was there. I couldn’t wait to finish and now I am sad I have to wait for another book to come out.
Read more
18 people found this helpful
Helpful
Report abuse

JAE reads too much!
2.0 out of 5 stars Is this a young adult novel?
Reviewed in the United States on September 10, 2021
Verified Purchase
Except for a couple of F-Bombs,I’d expect this to be targeted to young adults. Like 12-14 young.
Indian history, yes, but an Irish sheriff being constantly clued by young boys doesn’t ring true to my idea of law enforcement.
Are the Ashinonoaab the only tribe in the state without a gambling pact? It’s how they can get the country back!
Maybe that’s a fight Liam can win?
This book does not win for me!
Read more
12 people found this helpful
Helpful
Report abuse
See all reviews

a reader
5.0 out of 5 stars another great one by William Kent Krueger
Reviewed in Canada on September 10, 2021
Verified Purchase
Great story, loveable, believable characters and excellent description of landscape and life before we succumbed to development and urban/suburban degradation. Very skillful, sensitive and wise exploration of the ways racism becomes embedded in culture and the power of waking up to that.
Read more
Report abuse

Margaret McCrank
4.0 out of 5 stars Good mystery, interesting characters, easy to read.
Reviewed in Canada on January 24, 2022
Verified Purchase
This is a new author for me and I will certainly read more of his novels. I’m not a big fan of mysteries but this one is well-written and informative as well. I saw that this was #18 in a series but it worked well as a stand-alone book.
Read more
Report abuse