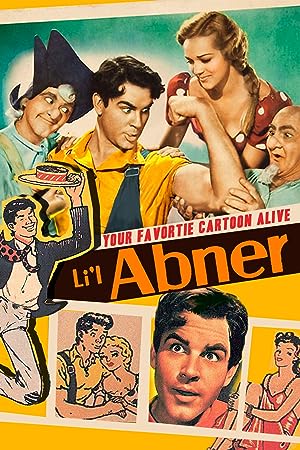 RehabladyReviewed in the United States on August 2, 2022
5.0 out of 5 stars
Had to switch from the VHS tape we have had for many years and unable to watch for many years.
Verified purchase
I really was looking for multimedia version but alas, all that was available was DVD. I snapped it up!
The cast of this 1959 film is fantastic. This is the original. I don't care about any remakes.
2 people found this helpful

JReviewed in the United States on September 8, 2022
5.0 out of 5 stars
Beautiful Musical!
Verified purchase
I haven't seen this musical in over 40 years. I took a chance and ordered a used copy. It's in excellent condition! I was thrilled at hearing all the songs and seeing many celebrities who were unknown then! Honest seller whom I would do business with again. Thank you!
One person found this helpful

Kindle CustomerReviewed in the United States on July 4, 2021
5.0 out of 5 stars
It's enjoyable
Verified purchase
What to know going in: Al Capp wrote it as satire, it the stage version on film. I mentioned this movie to some friends who had never heard of it. They were delighted to see it. I consider it fluff, but it's fun. The big name in the movie at the time was Stubby Kaye, but if you pay close attention you will see a future Catwoman and Elle Mae Clampett.
2 people found this helpful

R. DucharmeReviewed in the United States on December 14, 2021
5.0 out of 5 stars
Classic 50s Musical
Verified purchase
I was Pappy Yokum as a junior in high school. I broke my foot and wanted to do a slew of musicals and started with this one! The film is fantastic. It’s like they took the stage play and put it on a soundstage. With many from the original Broadway cast in the film it’s a sheer delight. I loved it.
2 people found this helpful

Alan B. WeaverReviewed in the United States on February 6, 2016
5.0 out of 5 stars
And then there is the great music score
Verified purchase
This movie so politically incorrect and correct that it could almost have been made yesterday. It trashes almost everything in this country from being lazy, corrupt politicians, voluptuous women, muscular men, our libidos. And then there is the great music score, athletic choreography and very stagy appearance to this movie. It almost feels like a filmed play yet it works. The technicolor is garish and appropriate to the material. Not to sound politically incorrect but it was wonderful to see curvy and attractive women in the movie. Julie Newmar is literally a physical knockout as is the rest of the cast. The plot is silly yet it has a lot of the bite that Al Capp had in his comic strip.
13 people found this helpful

SC_Amazon_ReviewerReviewed in the United States on March 3, 2017
5.0 out of 5 stars
Great movie and musical
Verified purchase
Great movie and musical. Saw it years ago, and recently watched it again. Loved "Lil' Abner" comics as a kid and once on vacation we visited a them park based on this same comic strip, called "Dogpatch USA". Innocent fun for the family.

Interesting to see Julie Newmar in all her glory as Stupefying Jones, and pre-Batman. A very brief appearance, but this also was probably the only un-credited appearance in a movie by Jerry Lewis. And if you look closely, you will see un-credited appearances by both Valerie Harper (Mary Tyler Moore Show) and Donna Douglas (before later achieving fame as Elly Mae in the Beverly Hillbillies). I completely missed noticing Donna Douglas, until the second viewing.

Annie Van AukenReviewed in the United States on May 23, 2010
3.0 out of 5 stars
Non-musical Abner
Verified purchase
The first LI'L ABNER movie brought Al Capp's Dogpatch characters vividly to life and is in many respects superior to the screen adaptation of the 1950s "Abner" Broadway musical.

After costuming and much makeup, this picture's cast were dead ringers for the newspaper comic folks they portrayed. In particular, Buster Keaton as Lonesome Polecat deserves mention. He is perfect and hilarious as the strange little Indian that brews cauldrons of Kickapoo Joy Juice. Also seen are many other silent era comics. (Doodles Weaver, of Spike Jones "Feitelbaum" fame, cameos as a local yokel. Befreckled former silent era Our Ganger Mickey Daniels has a few lines as doofus Cicero Grunts.)

Here, an average plot is assisted by spot-on performances. Fans of Capp's work will definitely NOT be disappointed in this little comedy that's still as yummy as "poke chops fo' brekfiss, poke chops fo' lunch, and fo' suppah....MO' poke chops!!"

Paco CalderónReviewed in the United States on June 10, 2009
5.0 out of 5 stars
AH HAS SPOKEN!
Verified purchase
Musically it's no Rodgers & Hammerstein; but it is an exceptional adaptation from comic strip to cinema, the more so considering its meager budget. Leslie Parrish, Peter Palmer (reprising his Broadway role as Abner), Billie Hayes and Al Nesor are dead ringers for their Dogpatch counterparts, and so is everyone else ...except for Earthquake McGoon (though no one notices). Cult legend Julie Newmar has a minor role as Stupefyin' Jones, and Jerry Lewis makes a stupified cameo. Only Salomey is missing!

Script and sets have a trace of Al Capp's sharp pen and wit ("'Afternoon, I'm Moonbeam McSwine; sleepin' out with pigs is mah line"), and even the choreography resembles the strip's manic tempo and outlandish draftsmanship -something the much more lavished "Dick Tracy" tried hard to achieve years later, but didn't.

Given today's infatuation with putting comics and graphic novels on film, it would be interesting to see a LI'L ABNER remake done with state of the art technology, but only if they repeat what makes this forgotten movie a gem: good script and good casting. One can put all the eye-popping visuals money can buy on screen, they won't amount to much if those two basic ingredients are missing. Remember PEARL HARBOR, and that SUPERMAN RETURNS bomb!
2 people found this helpful
See all reviews
Back to top
Get to Know Us
Make Money with Us
Amazon Payment Products
Let Us Help You
EnglishChoose a language for shopping. United StatesChoose a country/region for shopping.
© 1996-2022, Amazon.com, Inc. or its affiliates