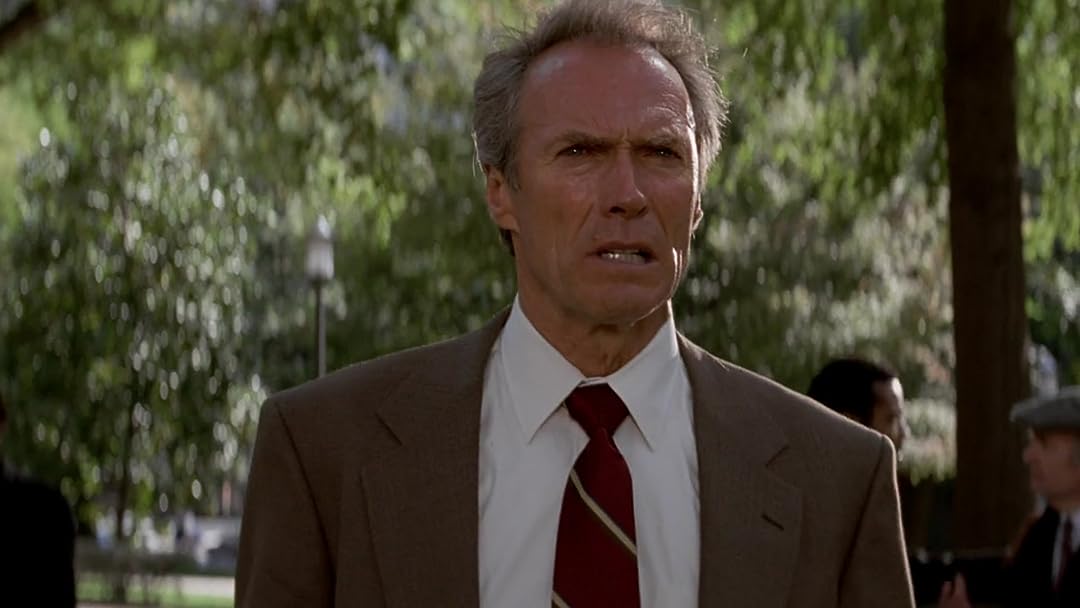 In The Line Of Fire

(3,940)
7.22 h 8 min1993R
A brilliant but deranged assassin sets his sights on killing the president - and torments the maverick Secret Service agent who failed to stop the murder of President Kennedy in 1963. With Rene Russo.

Jeremy L. DubrulReviewed in the United States on March 17, 2021
5.0 out of 5 stars
Suprisingly HOLDS It's Own
Verified purchase
1993, i think I got kicked out of college that year

In my mind, this is a film that has AGED well. And one does a disservice where you try to write it off as a "Clint Eastwood" flick. It isn't.

Clint is great and it is a vehicle where Clint can admit that; he IS getting older. Yes, the age difference between Rene Russo and Clint Eastwood is 27yrs, we've seen worse. EVERY FILM IS SUBJECT TO IT'S TIME. And, at this time, Steppenwolf Theatre of Chicago has been producing some FINE actors... And this flick has TWO of them: John Malkovich and John Mahoney, who for sure KNOW each other extraordinarily well, since they are FOUNDING MEMBERS of Steppenwolf and decided to star in "a Clint Eastwood film."

I still dig this film

seekerReviewed in the United States on June 3, 2019
5.0 out of 5 stars
Petersen and Eastwood--what more do you want?
Verified purchase
Spoiler alert...I guess!
Wolfgang Petersen--German director of Das Boot fame--came to America and made a mint in the 90s giving us the thinking man's summer blockbuster: In the Line of Fire, Air Force One, and The Perfect Storm. He seemed to lose his magic with Troy in 2004 and hasn't made a film I want to watch again since; but in the 90s, he made gold. Although Eastwood triumphs over the brilliant assassin--played pitch perfectly by John Malkovich--(spoiler alert? gimme a break! you think Eastwood dies in the end?), the film has an oddly elegaic tone throughout and a tamped down sense of triumph at the end; for Camelot cannot be resurrected (the assassination of JFK haunts the film and Eastwood's character throughout) and Frank's individual redemption cannot reverse America's decline from the sunny heights of the new Frontier. If you like a riveting thriller with some intelligent commentary on the state of America in the 1990s, you can't go wrong with this movie.
9 people found this helpful

Wayne F.Reviewed in the United States on May 13, 2021
5.0 out of 5 stars
Great Movie, Good Story, Fantastic Performances
Verified purchase
Every time I see this film, I think to myself, why doesn't anyone make good movies like this one anymore? That being said, it's no surprise I've watched this film at least five times, maybe more. The performances by Eastwood and Malkovich were as stellar as you would expect. Say what you will about the overall storyline, but the film moved forward at the perfect pace and the viewer never looses interest. I'm sure I'll watch it again some day before I die.
3 people found this helpful

AnnieReviewed in the United States on March 21, 2021
5.0 out of 5 stars
Great thriller
Verified purchase
Ywo of. The most capable and my favorite actors were great. Old plot, and a faced-nut not crazily, paced thriller about a secret service agent who has remained in the service long after others have retired. Rene Russo doesn’t disappoint. And can John Malkovich ever not be a drawing card?
3 people found this helpful

kyleReviewed in the United States on April 9, 2021
5.0 out of 5 stars
a rare movie
Verified purchase
its a rare movie that you can just watch and say it was all around good... there are better movies out there sure however this is just a good classic movie with crazy killers tons of classic lines and acting skills that are just non existant in modern movies where everything can be shot 20x anyway worth a watch for sure if u havent seen it
3 people found this helpful

joel wingReviewed in the United States on May 6, 2020
3.0 out of 5 stars
Good thriller as John Malkovich tries to assassinate the president
Verified purchase
In The Line Of Fire follows Secret Service Agent Frank Horrigan (Clint Eastwood) as he deals with a man Mitch Leary (John Malkovich) who wants to assassinate the president. The movie is a political thriller as Leary who goes by Booth calls Horrigan to taunt and brag to him about what he’s going to do as Horrigan investigates the case and tries to arrest Booth. It’s the relationship between those two characters that drives the entire story. It makes it compelling especially because you want Horrigan to win not because Leary is so bad, but because he’s at the end of his career and looked down upon by all the younger agents.
C
One person found this helpful

H. S. MarshReviewed in the United States on October 11, 2015
5.0 out of 5 stars
One of the Best
Verified purchase
This is a well-acted movie with a great story line. The plot develops logically and holds the viewers attention as it moves toward the dramatic conclusion. It's definitely a first-rate thriller. Clint Eastwood excels in his role as an aging Secret Service agent with an enormous sense of guilt for having failed to prevent the assassination of JFK. The villain is also played extremely well, giving the sense of a real competition between good and evil, with the evil one seeming to be unbeatable until the very end. Even though you can predict the eventual outcome, it still provides the intended "white knuckle" tension up to the very end. This is one that you'll want to watch again and again, as I did.
9 people found this helpful

Eliza H.Reviewed in the United States on April 18, 2021
5.0 out of 5 stars
Classic with Eastwood and Malkovich
Verified purchase
A movie full of suspense, thrills, drama and romance. Clint Eastwood, Rene Russo and Malkovich at their best! A bunch of familiar character actors to boot. Recommend!
2 people found this helpful
See all reviews
Back to top
Get to Know Us
Make Money with Us
Amazon Payment Products
Let Us Help You
EnglishChoose a language for shopping. United StatesChoose a country/region for shopping.
© 1996-2022, Amazon.com, Inc. or its affiliates