You've subscribed to Passport to Reading Level 3! We will preorder your items within 24 hours of when they become available. When new books are released, we'll charge your default payment method for the lowest price available during the pre-order period.
Update your device or payment method, cancel individual pre-orders or your subscription at
Your Memberships & Subscriptions
There was an error. We were unable to process your subscription due to an error. Please refresh and try again. 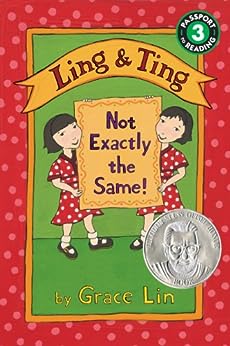 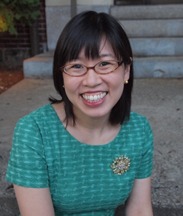 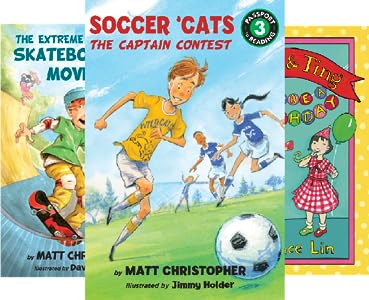 Starred Review. Kindergarten-Grade 2 Lin brings her talents to these charming stories about Chinese-American twins who like to stick together but are not as alike as everyone thinks. The six short chapters are the perfect length for beginning readers. In the first story, the girls get haircuts. Ting moves her legs and her fingers. Ting can never sit still. When her snipped hair falls on her nose, she sneezes and the barber cuts a little too much off her bangs. The simple illustrations follow this mishap throughout the book, making the sisters easily identifiable. In the other vignettes, Ling and Ting make very different dumplings, Ling cannot eat with chopsticks no matter how hard Ting tries to teach her, and they visit the library. Each story ends with an amusing punch line that will make readers laugh. The last chapter ties all of the tales together, showing the fun and friendship that the girls share. This relationship, combined with the simple sentence structure, repetitive text, and straightforward illustrations that reinforce new vocabulary words, will put this easy reader in the same category as Arnold Lobel's Frog and Toad books (HarperCollins). Kristine M. Casper, Huntington Public Library, NY
Copyright © Reed Business Information, a division of Reed Elsevier Inc. All rights reserved. --This text refers to an out of print or unavailable edition of this title.

*Starred Review* Sisters Ling and Ting may be twins, but that doesn’t mean they’re “exactly the same,” no matter what everyone says upon first meeting them. Children will come to their own conclusions after reading the six short, interconnected stories that make up this pleasing book for beginning readers. In the first chapter, “The Haircuts,” Ling sneezes while her bangs are being cut, and for a while at least, it’s easy to tell the twins apart. The chapters that follow reveal distinct differences in the sisters’ personalities, inclinations, and abilities. Despite those differences, in the end each girl subtly affirms her affection for the other. Framed with narrow borders, the paintings illustrate the stories with restrained lines, vivid colors, and clarity. The chapters often end with mildly humorous turns, from a neat play on words to a smack-your-heard obvious solution to an apparently impossible dilemma. These endings, as well as bits of comic byplay that occur in the brief framework vignettes, will suit the target audience beautifully. Lin, whose previous books include Dim Sum for Everyone (2001) and the 2010 Newbery Honor Book Where the Mountain Meets the Moon (2009), shows her versatility once again in an original book that tells its story clearly while leaving room for thought and discussion. Grades 1-2. --Carolyn Phelan --This text refers to an out of print or unavailable edition of this title.

Grace Lin is the award-winning and bestselling author and illustrator of Starry River of the Sky, Where the Mountain Meets the Moon, The Year of the Dog, The Year of the Rat, Dumpling Days, and Ling & Ting, as well as pictures books such as The Ugly Vegetables and Caldecott Honor book A Big Mooncake for Little Star. Grace lives with her husband and daughter in Western MA, where they get plenty of winter snow. Her website is www.gracelin.com. --This text refers to an out of print or unavailable edition of this title.
Read more

4.8 out of 5 stars
4.8 out of 5
164 global ratings
How are ratings calculated?
To calculate the overall star rating and percentage breakdown by star, we don’t use a simple average. Instead, our system considers things like how recent a review is and if the reviewer bought the item on Amazon. It also analyzes reviews to verify trustworthiness.

Ginger Williams
5.0 out of 5 stars My 7 Year Old Loves this Book
Reviewed in the United States on November 10, 2018
Verified Purchase
My 7 year old daughter is a good, but reluctant reader. It is hard to find books she will willingly read. This book was one of the few she reads over and over again. The reading level is probably too low for her and it doesn't push her reading skills very much, but at least she's reading! I would definitely recommend.
Read more
5 people found this helpful
Helpful
Report abuse

Afoma
5.0 out of 5 stars The Funny Antics of Ling and Ting!
Reviewed in the United States on February 8, 2019
Verified Purchase
Absolutely delightful early reader following identical twins, Ling and Ting and highlighting the often amusing differences between both girls. This one’s a classic!
Read more
One person found this helpful
Helpful
Report abuse

J. Hughes
5.0 out of 5 stars I liked Ling and Ting. It was my favorite book for first grade.
Reviewed in the United States on November 1, 2016
Verified Purchase
By Char age 6:
I liked Ling and Ting (Not Exactly the Same) by Grace Lin. The sister's haircut part was funny. They were fun, cute sisters. It was interesting that one of them ate with chopsticks. I loved how the sisters liked each other.

Melanie T. Campbell
5.0 out of 5 stars God some laughs from my Students
Reviewed in the United States on February 23, 2015
Verified Purchase
My first and second grade readers really enjoyed this book. Several times they laughed as they encountered the antics of Ling and Ting. Even though this was a 3rd grade level book, my students still could read most of the words and got the meaning of the stories inside. I like how one story built on the other. My twin 1st grade female students were especially excited that this was a book about twin girls.
Read more
6 people found this helpful
Helpful
Report abuse

Leah Unverferth
5.0 out of 5 stars Fun book
Reviewed in the United States on April 23, 2021
Verified Purchase
Bought this to go with our Logic of English curriculum. My 7 year old daughter really loved it and I thought it was clever and funny.
Read more
Helpful
Report abuse

J. A. Danziger
5.0 out of 5 stars Twins Are Different
Reviewed in the United States on January 30, 2017
Verified Purchase
My twin grandsons liked this. They liked that even identical twins want to be different. They are fraternal twins.
Read more
3 people found this helpful
Helpful
Report abuse

Sara
5.0 out of 5 stars Charming, great first readers
Reviewed in the United States on January 2, 2021
Verified Purchase
I love Grace Lin, she is such a wonderful storyteller! These books are charming and great for beginner readers (K-1 especially).
Read more
Helpful
Report abuse
See all reviews

Kindle Customer
5.0 out of 5 stars My kids love the stories!
Reviewed in Canada on May 14, 2020
Verified Purchase
My kids think Ling and Ting are funny and are not exactly the same! Recommend for 5 - 7 years old.
Read more
Report abuse