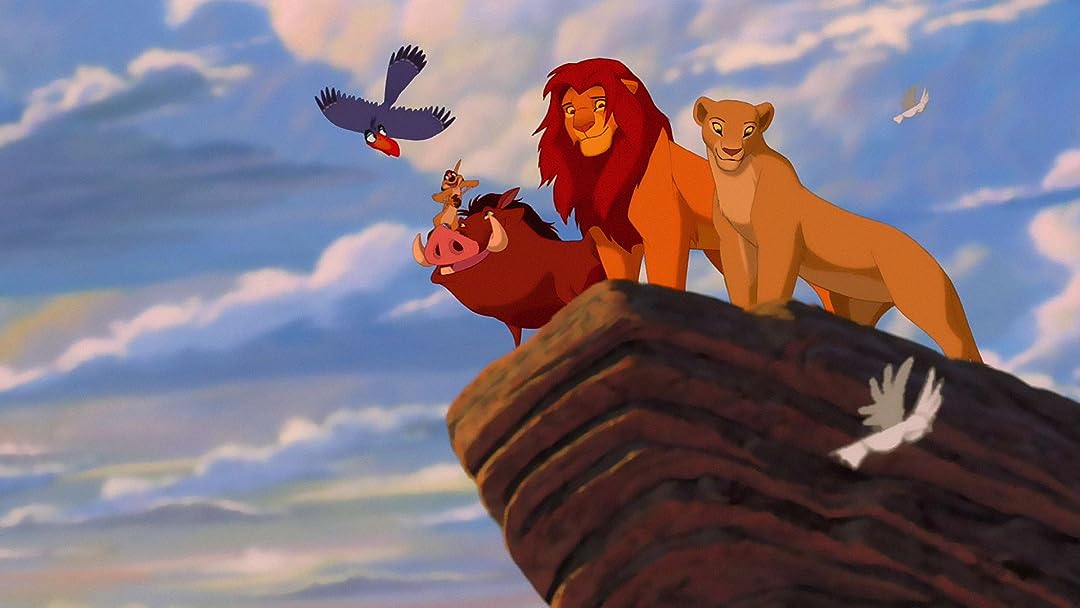 (7,681)
8.51 h 28 min1994X-RayHDRUHDG
Celebrate the glory of The Lion King as this magnificent coming-of-age masterpiece takes its rightful place as the reigning star of the acclaimed Walt Disney Signature Collection!

Jacob D.Reviewed in the United States on August 17, 2017
1.0 out of 5 stars
Unwatchable due to interlacing artifacts - Looks like a VHS rip
Verified purchase
I love the Lion King movie, but this digital version suffers from horrible interlacing artifacts, tolerable (barely) on computer but completely unwatchable on 65" plasma. Any fast, high-contrast motion results in a ghost image with horizontal stripes, like a old-school VHS rip using one of those USB converters! Shame on Disney and Amazon for botching this landmark partnership - for $20 I expected better. I really hope this is an issue with the initial rollout that can be fixed quickly, my family was so excited to finally be able to watch this classic title in HD on Amazon Video.

I have tried on Amazon FireTV, Mac OS X (using Chrome HTML5 Player) and on Windows (using Silverlight) and they all exhibit these artifacts, though it is less distracting on the computer because the screen is smaller. There is something wrong with the video encoding itself because the trailer looks perfect, and the player can be paused on an artifact frame. You can even see it in the "seek preview" window in the HTML5 player.

We have 1GB/s FiOS internet, so all of the devices are streaming at the highest quality settings. If I force the PC player to stream at the worst quality, it is less noticeable because the whole picture is blurrier -- but this defeats the whole point of HDTV! If you have slower internet it might not be an issue for you, but buy this at your own risk!

JWReviewed in the United States on August 17, 2017
1.0 out of 5 stars
The Amazon Video version isn't working correctly
Verified purchase
The Amazon Video version isn't working correctly.
There are lots of lines in it (SEE PICTURES). Not sure why. I've tried it on my ROKU, where I first discovered the problem and then tried it on my laptop. The problem was still there.
Amazon, please fix this.
129 people found this helpful

C.RorieReviewed in the United States on January 22, 2019
5.0 out of 5 stars
The original.
Verified purchase
Wife and I loved the original version. Couldn’t find it anywhere but Amazon hooked us up like a tow truck! No extra scenes,songs or any of that stuff. Exactly what we wanted; the original theater version!
39 people found this helpful

JamesReviewed in the United States on August 20, 2017
1.0 out of 5 stars
Oh I Just Can't Watch This Damn Thing
Verified purchase
As other reviews have noted, the streaming version of the Signature Edition that includes bonus features is terrible. Stripes appear in the animation, double-images, artifacts. It's a big ol' mess. They need to fix this crappy streaming version in a hurry.

Editing this review to add that Amazon returned my credit card charge without hesitation. That was my first time dealing with their Customer Service Department and it was a good experience, not a long hold time, went to a person after only one prompt, and took care of me on a Sunday evening. Good stuff.

AbrahamReviewed in the United States on August 18, 2017
1.0 out of 5 stars
Horrible Visual Artifacts
Verified purchase
Unwatchable due to horrible visual artifacts that other reviewers have mentioned. Paid extra money for the HD version so I could watch it before the SD release (which is a shameless money grubbing tactic to begin with), then I get this unwatchable crap anyway.
65 people found this helpful

J&JReviewed in the United States on April 6, 2021
5.0 out of 5 stars
4K vs Bonus Features
Verified purchase
Decisions, Decisions,
Do you Buy 4K knowing This Cinematic Spectacular will be Next Level?
Or do you go HD with Almost 4 HOURS of Bonus Features?

I chose Bonus Features bc even at 90's quality SD,
it's The Emotion stirring, Skin Tingling, Love Filled Lion King and I want More.
Best Choice Ever. (and none of the streaming issues mentioned in reviews)

Btw, if you're wondering about 'Theatrical Release' main difference is,
doesn't have the Broadway version "The Morning Report" added to new release.

Between Amazon's 'X-Ray' feature & Bonus footage, just blown away.
Did you know it took 3 years to do the Wildebeest scene?
Not to draw but, to get the CGI program with them running without, running over each other.

Did you know Mufasa's death was originally so much worse?
Can you imagine?? I start crying when Simba is left on the rock, at the idea of what's to come.
Mufasa's death is the most intense, next to Bambi's mom, in The Disney Catalog.

A test preview had young children sobbing hysterically so they toned it down.
Thank Goodness. 30 years later I'm still a lil traumatized & I watched as an adult.

Speaking of Mufasa, James Earl Jones and Madge Sinclair who voices Sarabi,
were also King & Queen of Zamunda in 'Coming to America'
I've watched that sooo many times & never put it together.

On to The Good Stuff
Bonus Features include Sing-a-longs. Many kid friendly and adult worthy features.
There's No Time So you kinda have to keep an eye.
However, 1st Bonus is a nod to Broadway version of Scar with low lights & Dark Music.

If you think letting kids watch will take the magic,
only thing like that is, showing the actors doing their voices then,
the animators creating characters based on actors expressions.

A lot of behind the scenes is with story boards, animation & The Creators/Crew.
Some cut features. Interview & performance by Sir Elton John.
Then the 'Score Emotion' with Hans Zimmer. Yes Hans, You are The Master of Scoring Emotion

Last bit, which I just Love is, The Lion King was created by Team B.
Team A was on Pocahontas. Disney's Big Project.
A little Lion King reminder to Grow where you are Planted.

As someone who went too many times to watch Original Theatre Release,
Gone back for Every Re-release in Imax, Owned VHS, DVD & BluRay copies,
prefers the Original to Live Action (bc Jeremey Irons will Always be Scar),
was Blown Away by the traveling Broadway show (bc who thought Live could compare to Animated)
had a fish named Simba, a cat named Nala and a framed poster of The Waterfall Scene..

I must share with you my tears of Joy from The Bonus Footage is Just Priceless.
2 people found this helpful

Sabbir LiakatReviewed in the United States on September 4, 2017
5.0 out of 5 stars
Top notch
Verified purchase
Was a bit hesitant to purchase because of the comments on quality, but I went ahead because The Lion King is an amazing movie. Quality on mine was top notch, no issues whatsoever on multiple devices. Worth every penny!
29 people found this helpful
See all reviews
Back to top
Get to Know Us
Make Money with Us
Amazon Payment Products
Let Us Help You
EnglishChoose a language for shopping. United StatesChoose a country/region for shopping.
© 1996-2022, Amazon.com, Inc. or its affiliates