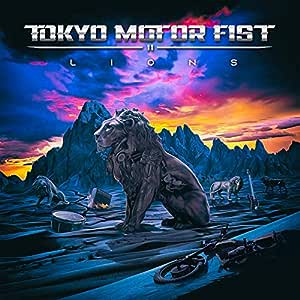 Tokyo Motor Fist's self-titled debut scratched an itch for music fans who have been starving for new albums from Trixter or Danger Danger (and who also happen to love Def Leppard) and now the band delivers another fix with their sophomore album, LIONS. Once again, the band delivers exactly what fans want and would expect with their catchy and uplifting hard rock. Featuring Ted Poley (vocals), Steve Brown (guitar), Greg Smith (bass), and Chuck Burgi (drums, Tokyo Motor Fist was birthed out of Ted and Steve s long standing friendship.

4.9 out of 5 stars
4.9 out of 5
24 customer ratings
How does Amazon calculate star ratings?
Amazon calculates a product’s star ratings based on a machine learned model instead of a raw data average. The model takes into account factors including the age of a rating, whether the ratings are from verified purchasers, and factors that establish reviewer trustworthiness.
Top Reviews

Jeff
5.0 out of 5 stars Ted Poley & Steve Brown are back with another fantastic album!
Reviewed in the United States on July 27, 2020
Verified Purchase
Frontiers records have done it again. Their roster of talent is just incredible, and Tokyo Motor Fist are not exception. This is one of my favorite albums that has been released in 2020. It's full of amazing songs that make for the perfect soundtrack to Summer. If you like melodic hard rock with big/anthemic choruses and blistering guitar solos then this is the record for you. I can honestly tell you that the CD is packed with great tracks - not just a lead single and filler. Many of the tunes on this one are phenomenal and you will want to play this one over and over again. If you're thinking about picking up "Lions", go for it. You will NOT be sorry.
Read more
Helpful
Comment Report abuse

john newell
5.0 out of 5 stars Lions Is Excellent
Reviewed in the United States on July 10, 2020
Verified Purchase
Steve Brown of Trixter and Ted Poley of Danger Danger rock in this band...
The Lions album has all excellent songs on it.

CD ME
5.0 out of 5 stars Good to see them back in studio
Reviewed in the United States on July 16, 2020
Verified Purchase
Great second release from Tokyo Motor Fist which features Danger Danger’s singer and Trixter’s guitarist.
Read more
Helpful
Comment Report abuse

Gigman
5.0 out of 5 stars Fantastic Collection of Songs!
Reviewed in the United States on July 15, 2020
Verified Purchase
These guys really know how to put together 2 great albums.
Read more
Helpful
Comment Report abuse

SJW
5.0 out of 5 stars Very Good
Reviewed in the United States on July 26, 2020
Verified Purchase
I think it's better than their first one.
Read more
Helpful
Comment Report abuse

C. Shaeffer
3.0 out of 5 stars Still Good, but A Big Step Back from their Debut
Reviewed in the United States on July 11, 2020
The initial album by this group, the self titled 2017 release, blew me away. Everything was near perfect - great production, great melodies, and just outstanding songwriting overall.

Their follow up, Lions, is not as good. To be honest, it was a tough act to follow. It was hard to imagine ANY group putting out an album of this kind that improved upon the 2017 release.

The opening track, "Youngblood," starts off in much the same way. Layers of guitar similar to Def Leppard, with great harmonies and solid vocal work. From there, however, it's a mixed bag. There's a few clunkers here (which, the previous release had no bad songs at all), in particular, "Decadence on 10th Street" goes absolutely nowhere. On one of the album's better tracks, "Mean It," vocalist Ted Poley really struggles with the high notes. "Sedona" tries hard, but never really takes hold. Dennis DeYoung stops by for an appearance on the title track "Lions," which is mediocre.

In the end, the songs just aren't as good this time around. Solid release though - if it weren't a follow up to such an amazing album, I'd rank it a 3.5 or 4. But it's impossible not to compare the two albums, as they took the same approach to both. "Lions" falls significantly short of their debut.

Chris KaiserTop Contributor: Rock Music
5.0 out of 5 stars Melodic rock at its best
Reviewed in the United States on July 11, 2020
I am a big fan of Danger Danger and Trixter so this is the greatest thing that could happen to music for me. Ted Poley has one of the best rock voices and Steve Brown is an amazing guitar player and song writer. Together they have a great combination of heavy guitars and melodic songs. They are catchy, inspirational and just fun!!
Read more
Helpful
Comment Report abuse
See all reviews from the United States