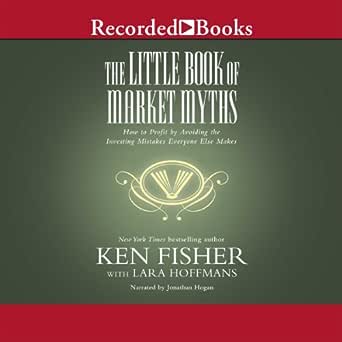 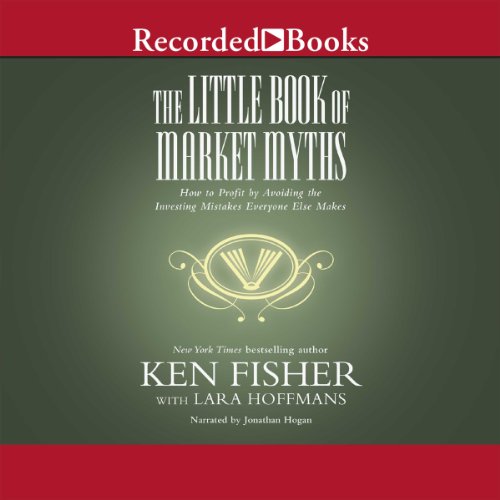 The Little Book of Market Myths: How to Profit by Avoiding the Investing Mistakes Everyone Else Makes

List Price: $13.99
You Save: $2.04 (15%)
By completing your purchase, you agree to Audible’s Conditions Of Use
Sold and delivered by Audible, an Amazon company
Share

4.1 out of 5 stars
4.1 out of 5
49 global ratings
How are ratings calculated?
To calculate the overall star rating and percentage breakdown by star, we don’t use a simple average. Instead, our system considers things like how recent a review is and if the reviewer bought the item on Amazon. It also analyzes reviews to verify trustworthiness.
Top reviews

Alan F. Sewell
5.0 out of 5 stars Myth-busting the stock market: QUESTION EVERYTHING
Reviewed in the United States on January 29, 2013
Verified Purchase
For an instant, while skimming the Table of Contents, I thought this was going to be yet another vapid investment book filled with shopworn platitudes. Then it hit me (as I should have understood from the title) that this is a MYTH-BUSTING book. Author Ken Fisher isn't repeating the myths that most other investing books hawk, he's BUSTING them.

Thus, his chapter "Stop-losses stop losses" doesn't advocate using stop-loss triggers (like most other investing books advise) but to AVOID using them. The chapter on "Superiority of Small-Cap Value" doesn't mean that small-cap stocks offer superior value (as most conventional theorists suppose) but the opposite, which is that small caps generally underperform. I also like his idea of "harvesting" your stock market profits from time to time instead of the shopworn cliche' of "letting your profits compound." That's right, Fisher says it's perfectly OK, to take money out of your portfolio and spend it on other things you need. Other chapters debunk the macroeconomic myths touted by permabears who allege that the USA is going to collapse under its debt burden.

The most potent aspect of the book is its repeated warning to "QUESTION EVERYTHING!"

Investment mavens on TV and the financial press often traffic in dis-information either because they're trying to manipulate their own stock portfolios or because they're fallible human beings who are well-meaning in their advice but turn out to be wrong. They say "short the Euro, the European Union is about to implode." A year later the European Union is still here and the Euro is up 20%. Or they say "gold is going to $2,000 on economic uncertainty." A year later gold has plunged from $1,750 to $1,300. Or they say "Apple will go from $700 to $1,000" and a year later it is $450. They say "Sell now because it is going to $300." As soon as they sound the "sell" alarm the stock starts to go up again.

Because the Wall Street money funds are often in league with the business media much of this dis-information in propagadated for the purpose of persuading the investing public to buy stocks at the highs and sell them at the lows. Hedge funds want the public to buy stocks at the highs so they can profit by shorting them. They tell their media buddies to tout the stock to get the public to buy into it. After the price runs up the hedgies crash the stock with massive short selling, then tell their media cronies to scare the public out of it by selling at the bottom. Then they cover their shorts, reload their long positions, and tell the media to start touting the stock again. Fleece the public again and again, rinse and repeat. The very market terminology of "flash crash, insider trading, dark pools, high frequency trading" and so on tells us that we're dealing with an unlicensed bedroom casino, not a real market where stocks are bought and sold on the basis of honest information. Ken Fisher teaches us to question the motives of those who propagate "information" that is used to manipulate the markets.

IMO the book is timely because 2013 may be the year the stock market gets back into a secular bull market. Some market theorists would say that a new secular bull market started at the generational low of March, 2009 when the DOW bottomed in the 6,400's. But the market has been so volatile since then that investors don't feel like it's been a bull market. As of today (January 29, 2013) the S&P500 is at the very same 1500 level it first reached in March 2000. In nominal terms the market has been flat for 13 years and adjusted for inflation has lost 29% of its value. The market has actually performed much worse than that because the extreme volatility within the 13 year bear market has created many crash-and-burn scenarios like the "flash crash" that induces small investors to buy the highs and sell the bottoms.

Investors who followed the conventional wisdom of "buying and holding a well-diversified portfolio of blue chip stocks" have gone nowhere but down since 2000. Those who bought into the investment industry's pitch of "buying small cap growth stocks for superior returns" have fared even worse because these smaller cap companies were not ony trashed by hedge funds, but were often managed by ethically-challenged insiders who watered the stock. Management awarded millions of shares of stock to themselves for free, while the public shareholders ate the dilution. Very few growth stocks can stay afloat when the owners are flooding them with water. On top of all that we've had nothing but recurring crises in the macro-economic world. Budget deficits; government shut downs; the Eurozone falling apart; nuclear reactors blowing up in Japan; wars and threats of wars in the Middle East.

All of this taken together has made this the worst time in generations to be in the market.

But could things be changing for the better? Could we be on the verge of ramping up another bull market whereby the stock market will be a tailwind that helps investors acquire wealth rather than a windshear that slams them to the ground? 2012 was a decent year with a 13.41% return. Volatility is going down. The Federal Reserve is keeping interest rates low. Employment is picking up. The European Union is settling down for the moment. A small bit of regulation is creeping into the market for the first time in decades.

We've had 13 years of garbage in the stock market, so maybe it's time for 13 years of gains. If you're thinking along these lines read this book. It doesn't cover everything you'll need to know about investing in the market (It didn't for example cover my specialties of buying EFT's and REITS) so you'll have to read other books besides this one if you're not already up to date on those topics. But the book does serve its purpose of helping investors to keep from being misled by much of the bogus conventional wisdom that "investing 101" books preach. And it warns us not to rely on the loud-mouthed market mavens on TV and in the financial press who are almost always wrong. Ken Fisher's most important lesson: QUESTION EVERYTHING YOU HEAR. Don't believe a word of it until you have validated it for yourself.
Read more
28 people found this helpful
Helpful
Report abuse

amateur
5.0 out of 5 stars Surprising but accurate facts about the stock market
Reviewed in the United States on April 17, 2013
Verified Purchase
I chose this book because it is by Ken Fisher. He is well-educated and has decades of experience in investing. All his opinions are supported by research; some are quite surprising, hence the title of this book. I've followed his column in "Forbes" for a couple of
decades and he is almost prescient in his predictions of macro situations. I suppose the proof of his wisdom is the fact that he is a billionaire and very wealthy people trust him with their money. I would recommend this book to any interested person.
Read more
3 people found this helpful
Helpful
Report abuse
See all reviews

JB
5.0 out of 5 stars Great book
Reviewed in the United Kingdom on February 19, 2013
Verified Purchase
Another great book from Ken helping to navigate the investment world. A must read for all investors looking to improve their knowledge.
Read more
Report abuse

BULENT
5.0 out of 5 stars Worth reading
Reviewed in the United Kingdom on July 28, 2013
Verified Purchase
Whenever I find trouble at my trades I read one of ken's book along with some other classics .This is one of them.It looks like debunkery but not the same .It is well worth reading .
Read more
Report abuse

Praveen jadhav
1.0 out of 5 stars Beware from pirated copy ,when it's totally white page ,there doubt in copy
Reviewed in India on November 8, 2018
Verified Purchase
It's look like pirated copy,i have strong doubt ,pages are in totally white in colder which seems pirated
Read more

1.0 out of 5 stars Beware from pirated copy ,when it's totally white page ,there doubt in copy
Reviewed in India on November 8, 2018
It's look like pirated copy,i have strong doubt ,pages are in totally white in colder which seems pirated
Images in this review

D RAMKUMAR
3.0 out of 5 stars Three Stars
Reviewed in India on February 4, 2018
Verified Purchase
Good Book
Read more
Report abuse
See all reviews
Back to top
Get to Know Us
Make Money with Us
Amazon Payment Products
Let Us Help You
EnglishChoose a language for shopping. United StatesChoose a country/region for shopping.
© 1996-2021, Amazon.com, Inc. or its affiliates