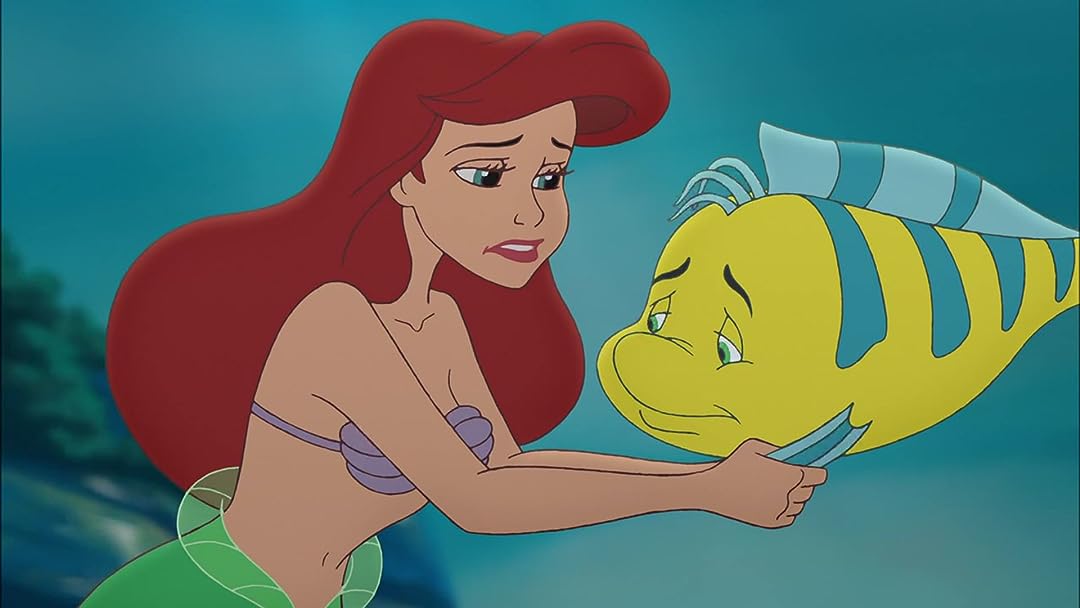 Brittany LewisReviewed in the United States on April 24, 2019
4.0 out of 5 stars
How desperate are you for a nap?
Verified purchase
My 4yo daughter bought this movie for herself while I was taking a nap. She reports, “it was really easy...I just kept pressing ok”. Personally, I didn’t want to spend $20 to take a nap, but it did give me an hour of rest so at least I got something out of it. She seems happy with her purchase considering she has been talking about “the movie I bought without asking first” for the last 2 days.
27 people found this helpful

Henry WestReviewed in the United States on May 16, 2012
5.0 out of 5 stars
Meet Melody, The Littlest Mermaid!
Verified purchase
The Little Mermaid II: Return to the Sea is a 2000 sequel to the 1989 Disney animated box office hit. In Part II, which takes place a couple of years after the events in the original movie, Princess Ariel, the former mermaid now human, marries Prince Eric and gave birth to a beautiful daughter named Melody. As the years went by, Melody is curious about the seas, but Ariel is keeping Melody's mermaid heritage a secret. One day, Melody is visited by a octopus-like sea-witch named Morgana, who just happened to be the sister of the now-deceased Ursula, offers Melody a chance to be a mermaid-for a price. When Melody ends up in danger, it's up to Ariel, as she changes to mermaid form, and her undersea friends to save Melody before it's too late. The special features includes a deleted musical number featuring Morgana, a interactive mermaid adventure game, a classic Disney animated short featuring merbabies and more. The Little Mermaid II is one of the many Disney DVD favourites any Disney Princess fan will enjoy and get to know Melody, the daughter of Ariel!
10 people found this helpful

Kayla GReviewed in the United States on February 28, 2010
4.0 out of 5 stars
Great Movie With a Lovable and Fun Protagonist
Verified purchase
I've loved Disney forever and I loved this sequel. The story is predictable: Morgana, Ursula's younger sister, uses Melody's desire to be a mermaid against her. Yeah, been there done that, but the animation is stunning and I love Melody's personality. She is a fun, if not gullible little thing, that the viewer will love. Ariel plays the role of the overprotective mother in this one, acting as her father Triton did in the first one, she doesn't want Melody to learn about her past in the sea. It was interesting to see the former fun-loving mermaid become a stickler for rules and I liked that because it showed Ariel's growth over time. The plot is predictable, yes, but the animation is beautiful and the mother/daughter sequences are great to see. Eric is his usual self, as stated above, where he plays the stagnant "token" boyfriend figure, but he maintains a fatherly influence over Melody. Great film, I'd say!
3 people found this helpful

The Warden FamilyReviewed in the United States on May 12, 2019
4.0 out of 5 stars
Better bad guy than the 3rd one has
Verified purchase
Not as good as the first one but better than third. Has Ursula's sister if your kid likes bad guys. Good for kids who just want more Ariel and parents who just want something other than watching the first one for the millionth time.
3 people found this helpful

Michael Patrick BoydReviewed in the United States on August 12, 2010
4.0 out of 5 stars
Melody
Verified purchase
The Little Mermaid II: Return to the Sea is one hour and seventeen minutes and was released on video on September 19, 2000. This was the direct to video sequel to The Little Mermaid. The movie opens with the celebration of the birth of Ariel and Prince Eric newborn daughter Melody. The celebration is interupted when Morgana, Ursula's sister, appears and tries to kidnap Melody, but is foil and retreats to the Antarctic region along with her sidekicks Cloak, Dagger, and Undertow. It is twelve years later and Melody's 12th birthday party. She has gone beyond the forbidding wall which was erected to protect her from Morgana. Melody finds the locket that her grandfather, King Triton, gave her when she was born. Melody confronts her mother and the two having a falling out. Melody heads out to sea on a row boat to find the answers she is looking for. Melody meets Undertow and he convinces her that Morgana has the answers she is looking for you. Cloak and Dagger tow her to Morgana's hideout and she turns Melody into a mermaid, but there is a catch, she tells her that she must retrieve the trident if she wants to remind a mermaid forever. Melody along with two new friends, Tip and Dash, go to Atlantica get the trident and return to Antarctic region. Ariel meets up with Melody and tries to explain to her the reason she was not aloud to go to the sea, but it is too late; Melody gives the trident to Morgana. With the trident in Morgana's hands she begins her brief takeover of the seas. In the end Melody retrieves the trident and King Triton encases Morgana in a block of ice and is last seen falling to the bottom of the Antarctic Ocean. As for as direct to videos goes, this is one of the better videos. Though it does not live up to its full potential. It does not have any great songs like Under the Sea and Kiss the Girl like the original Little Mermaid did and parts of the movie looks like cut and paste from the original as well. Still the Little Mermaid II: Return to the Sea is an enjoyable movie and gets a B-.

Coming to Video
A. The Hunchback of Notre Dame II
B. Lady and the Tramp II: Scamp's Adventure

KaitlynReviewed in the United States on May 9, 2018
5.0 out of 5 stars
Perfection.
Verified purchase
Came a week sooner than expected. The package was in perfect condition. And the blu-ray played with absolutely no issues at all. I was worried because some of the reviews said it wouldn’t play, so I watched it before giving it to my daughter to avoid any frustrations if it didn’t work. But no such problem! Definitely worth the price!
4 people found this helpful

Amazon CustomerReviewed in the United States on April 25, 2018
1.0 out of 5 stars
Don’t buy! Disk will not play!
Verified purchase
I have one disappointed little girl. She waited weeks for this movie to arrive and when it did it wouldn’t work. I doubt I’ll get a refund. Might as well have thrown the money right in the trash.
7 people found this helpful
See all reviews
Back to top
Get to Know Us
Make Money with Us
Amazon Payment Products
Let Us Help You
EnglishChoose a language for shopping. United StatesChoose a country/region for shopping.
© 1996-2022, Amazon.com, Inc. or its affiliates