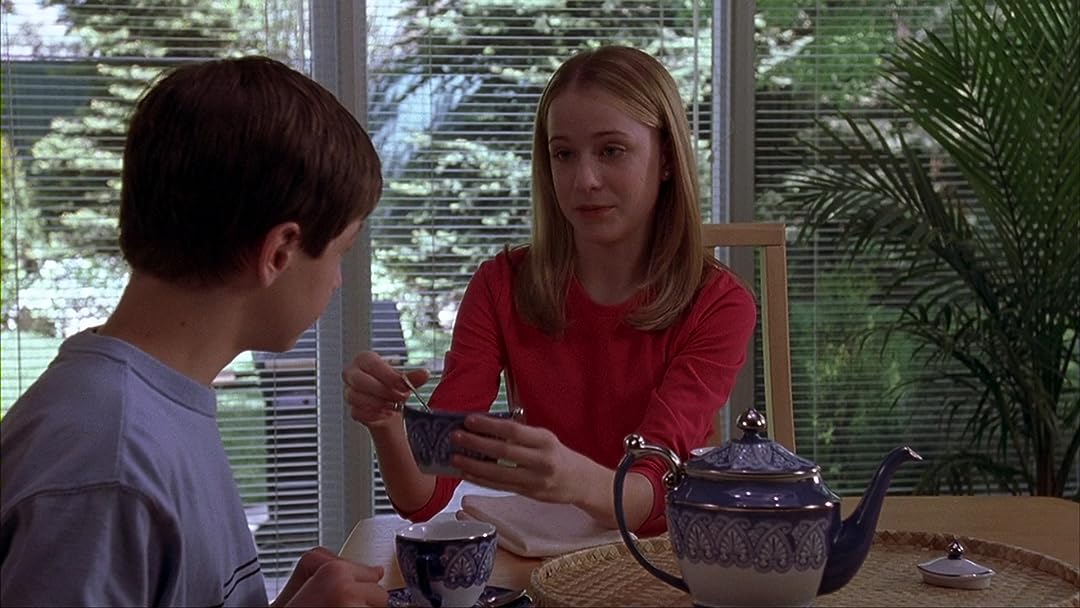 (82)
1 h 36 min2002PG
Emily Lindstrom, a gifted 14-year-old violinist, skips summer camp in order to prepare for an audition with the prestigious San Francisco Youth Orchestra. Emily has also set up a side business as a "secret keeper", charging a 50-cent fee to share and keep the neighborhood children's secrets. She soon discovers, however, that there is a price to keeping secrets that can't be measured in coins.

JDrgnReviewed in the United States on September 8, 2019
5.0 out of 5 stars
Good family film, not too cheesy, and for the most part realistic
Verified purchase
I remember as a kid seeing this as a preview on a movie I owned. Even then I thought that it would be interesting to watch, but could never find the movie itself. 17 years later I find it here and read the description and IMMEDIATELY remembered the preview from my childhood. Throught it would be a cheesy kid film, but I always was interested in seeing it. WOW did it very much exceed my expectations for a kids movie! Great family film, a coming of age story with a good lesson regarding honesty with those you love. Would love to show it to my future children.
4 people found this helpful

nycReviewed in the United States on August 17, 2017
3.0 out of 5 stars
A Cute Movie About Secrets with Loads of Cute Kids, but Movie is Longer Than It Has To Be
Verified purchase
it's a nice movie with a bunch of cute kids who seem all well educated and sophisticated. However, the movie could have been an hour long instead of 1.5 hours. The first half hour was great as it explains all the characters, but the second half hour was quite slow and didn't offer much more than what is known from the first half hour. By the third half hour, suddenly the kids got weird with each other and that's when the story picked up speed.

The movie is about secrets everyone has, and how it can hurt many people because sometimes people lie to keep a secret. The idea is a good one, but some secrets can hurt people badly if told, but the movie doesn't talk about it that way. Overall, this is a good family movie with decent moral ideas. However, as one reviewer said, the ending was not right in which the younger brother put so much energy in building a relationship with the young girl, who is the main character, only to have to give her up to his older brother who was only in the last part of the film. It's an unfair ending and sends a really bad message that all your hard work doesn't pay off.

Michael SlaterReviewed in the United States on August 12, 2010
5.0 out of 5 stars
A film as good as "Little Secrets" doesn't come along too often!...
Verified purchase
There are many other reviews here that outline what this film is about, so I won't bother repeating it here. However, I do want to say what a great film this is! I happened to catch it on one of the cable channels here recently, and although I must admit I've never heard of it before, I was completely won over by this charming film from the very beginning! I found the storyline to be quite original, and there were many valuable lessons to be learned along the way. I'm sure this film was intended for young adults, but I'm much older than that and still enjoyed it very much! In fact, I liked it so much that I just purchased the DVD here on amazon! The cast in this movie couldn't be better, and they all give wonderful performances! Evan Rachel Wood is perfection itself in her role as Emily, and the chemistry between her and the supporting cast easily deserves 5 stars. More recently, Evan co-starred with Larry David in the Woody Allen film "Whatever Works", and I couldn't believe this was the same actress! In "Little Secrets", she gives a very charming performance in what is certainly an excellent film for the entire family. In "Whatever Works", she gives a first rate comedy perfomance. After seeing these two films, I also checked out her break-through role in the movie "Thirteen", and saw still another side of Evan's great talent. In this, she tackles a serious dramatic role in a coming-of-age story about peer pressure that many young adults face along the way, and she handled the role brilliantly! After viewing "Little Secrets" and these other great films that she has made, I will certainly be wanting to check out some more! A great actress that should have a great future ahead of her!
7 people found this helpful

SabbethReviewed in the United States on September 8, 2019
4.0 out of 5 stars
A children's movie that takes itself seriously
Verified purchase
This movie will give you a break from all of the other shallow, mind numbing, super-charged kids movies. The story line is unique and it takes on topics that may not seem significant for adults but are serious enough for a child to relate. I'm just pissed that Phillip put in all of this effort for Emily and his "adorable big brother" ended up winning her over????? Not sending the right message. Other than that-- great film.
3 people found this helpful

KcornReviewed in the United States on June 18, 2003
5.0 out of 5 stars
Hits all the right notes- great family viewing!
Verified purchase
If you're looking for a wonderful movie to watch with your kids, check out this one...it tells a very believable story with heart and integrity. Although it is probably geared towards females ages 7-12, it kept this adult riveted.
At the heart of the film is fourteen year old Emily (played by Rachel Wood) who is the neighborhood "secret keeper", charging a small fee so that the neighborhood children can unload their guilty consciences (and sometimes a broken item or two) with her. Unbeknownst to her young clients, however, Emily has her own secret, a huge one, which she has been hiding for years.
Meanwhile, complications ensue as Emily finds that secrets and lie have a way of growing more difficult to hide.
All of this unfolds in a very believable way. How refreshing to find a film that teaches solid values without heavy moralizing or preaching to its audience. I'm buying several copies to give as gifts because I think films like this deserve support..and, hopefully, more like this will be made. Highest recommendation for this one!

SeraphimTheOrthodoxReviewed in the United States on January 10, 2020
5.0 out of 5 stars
Charming movie
Verified purchase
Really caught me off guard. Felt bad for the leading "man" though, who watched his older brother sail off into the sunset with the girl he spent the entire movie courting. And in real life, neither would he have taken it so well.

KellyReviewed in the United States on June 17, 2018
5.0 out of 5 stars
Some secrets should shared....
Verified purchase
This is a story about secrets and being honest and telling the truth. A lot of love and heartfelt emotion in this one. A definite chick flick, but guys could learn from this one too. I won't give away the secret of this story, you'll just have to watch and enjoy for yourself.
3 people found this helpful

donna36Reviewed in the United States on June 8, 2021
5.0 out of 5 stars
Love it
Verified purchase
I remember having this on vhs when i was a kid so had to have it on dvd i love david gallagher and he a great actor all the kids did a great job it a very good movie for the whole family.
See all reviews
Back to top
Get to Know Us
Make Money with Us
Amazon Payment Products
Let Us Help You
EnglishChoose a language for shopping. United StatesChoose a country/region for shopping.
© 1996-2022, Amazon.com, Inc. or its affiliates