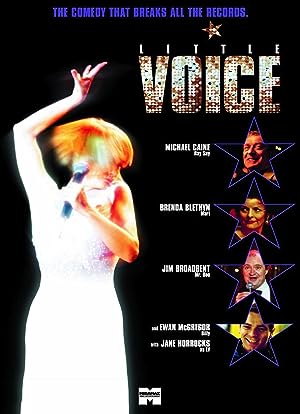 (597)7.01 h 36 min1998R
World-class stars Michael Caine (Hannah and Her Sisters), Brenda Blethyn (Secrets and Lies) and Ewan McGregor (Star Wars: Episode I, Trainspotting) deliver acclaimed performances in an inspirational story about a painfully shy young woman and how the power of music leads her to an amazing transformation!

Hee Chul KwonReviewed in the United States on June 22, 2016
5.0 out of 5 stars
GREAT GREAT MOVIE
Verified purchase
How can I convice you to watch this mervelous movie?
It was a magical film for me and I was enchanted for this film and had to position this one for my top 10 musical (Not exactly a musical though).

Ewan Mcgregor, Michael Caine are all just so lovely but most of al, most of all the main charactor Jane Horrocks was an angel.

Jane was a total recluse and lives with her mother.
She is so so shy that whenever someone visits she even dashes to her room hides. She never even speaks.
She is like 30 after all.
One thing she does is she constantly listens to old songs like Judy Garland, Marilyn Monroe and Shirley Bassey.
The mother has a boyfrind (Michael Caine) who works for music business and one day when Jane was listening to the music, the ligh goes out and didn't know that, she sang out loud.
Accidentally listens to her singing, the boyfriend hears her song and was totally knocked down by her voice, her technique.
She was a natural born diva.
The only problem was she was so shy that it was almost impossible for them to make her sing in public.
Now can they be able to make her sing in public?

When they are about to give up and go out, she sings again because she saw her dead father and she wanted to sing for him.
They hear her singing outside and again they were totally freezed.
They wanted to earn money out of her.
Now there is another man Ewan Mcgregor who is the only guy who truely cares about Jane Horrocks.
He couldn't do anything so he just looks at her from far away.

The day she sings in the big bar, the father was with her the whole time.
She sang, she perform like a true diva, the true star.
Everyone were crazy about her.
The mother and Michael Caine were almost crazy from the reaction of the audiences.
But Jane Horrocks talks to herself, this was the only once that she sang in public and it was for her father.

The day they wanted to make her sing again, there was a fire on the house and all she wanted was to bring all her records out from the fire.
No one helped her but Ewan Mcgregor. He was like a knight with a white horse.
She finally saw the sun. She is not a recluse anymore.

SmrzReviewed in the United States on February 26, 2013
4.0 out of 5 stars
LITTLE VOICE MAKES BIG NOISE!
Verified purchase
Little Voice is truly a charming fantasy that spins the tale about a painfully shy young woman and how the power of music can lead to an amazing transformation. Laura, nicknamed LV for Little Voice, is the tale of a reclusive young woman who lives in the shadow of her spiteful, shrew-like mother. LV can really only communicate by mimicking performances by torch singers such as Judy Garland, Marilyn Monroe, and Shirley Bassey. LV is played by Jane Horrocks, who starred in the British cult sit-com "Absolutely Fabulous". Her mother is played by Brenda Blethyn, who received a very well deserved Academy Award Nomination as Best Supporting Actress. LV spends hours alone in her room playing old records, which she inherited from her beloved late father who shared a fondness for these famous singers. Michael Caine, who received a Best Actor Golden Globe Award for his performance as a sleazy talent agent, discovers the secret of LV's voice and smells money. He hooks up with an equally sleazy nightclub owner played by Jim Broadbent who plans to exploit LV's special talent. Ewan Mcgregor plays a local telephone repair man who also raises pigeons, is really the only character in the movie who seems to honestly care about LV, and tries to communicate with her as much as possible. Horrocks does all of the singing herself and it is truly uncanny the way that she can sound just like her idols. The movie is a vivid adaptation of Jim Cartwright's London play "The Rise And Fall Of Little Voice". All five characters are excellent! It comes off as an odd British fantasy which plays achingly melancholic at times. Overall, however, I found the film totally uplifting! The running time of the film is 97 minutes with not even one minute wasted. It is in Widescreen format and the transfer is excellent! HIGHLY RECOMMENDED! SMRZ!!!
6 people found this helpful

Amazon CustomerReviewed in the United States on October 31, 2020
5.0 out of 5 stars
Gem of a movie.
Verified purchase
Fabulous cast, setting and story of a young woman finding her (literal) voice through the magic of song. Against the odds of a caustic, suffocating mother and ill-intentioned cohorts. Originally a stage play......

Janie MartinReviewed in the United States on October 10, 2014
5.0 out of 5 stars
Should have received an academy award!!!!!
Verified purchase
This is the most wonderful movie of all time also starring Michael Cain. I think he got an award for this movie. But as a singer myself I have to say the actress Jane in this movie is unbelievable tops!!! I still can't wrap my head around the fact that she actually sang all the song herself and her ability to mimic so many voices is nothing short of incredible!!! All the actors were great in this. It is British. I would say that Ewan McGregor was good but really was not the major actor.

It takes a dramatic turn near the end which shocked and surprised me so all in all I would give it a 5 star rating. This movie gets very dramatic and an unbelievable performance by Micael Cain!! The singing performance in this movie is a real show stopper and very exciting. Why have I not heard of this actress/singer she is a super star!! If you love Judy Garland and Shirley Bassey and others like them, you are going to love this movie!!!!
Janie Martin vocalist
One person found this helpful

William ErvolinoReviewed in the United States on June 22, 2019
1.0 out of 5 stars
Another Defective DVD
Verified purchase
Not the first time I have purchased a DVD that doesn't load and cannot be viewed. Was looking forward to see this again with friends, I had seen it after its initial release, but...nothing. I had plenty of other DVDs to share with my company, so I know its not a hardware problem. I logged on today to find out how to return it and was told the return window ended yesterday. It was only $9.99 but I don't understand why I have to get stuck with a defective DVD when I buy so many products from AMAZON. Obviously, when new DVDs arrive you have to view them immediately. NOT happy about this.

R. LinsonReviewed in the United States on February 28, 2020
5.0 out of 5 stars
Wonderful movie that has almost become a cult classic and is impossible to find.
Verified purchase
Loved this movie very much and the lead actress does an incredible job. I’ve only ever seen her as bubbles from absolutely fabulous TV series, but Jan did an incredible performance in this film. It is no longer available in Blu-ray... that I have found, so I purchased the DVD copy.

Floridian Amazon UserReviewed in the United States on June 15, 2014
4.0 out of 5 stars
Little Voice
Verified purchase
Jane Horrocks, always a secondary character who often outshone the primary characters in Britain finally got her chance to be the main character. In Britain's "Absolutely Fabulous" as well as a major motion picture, "The Witches," when she appeared, her outgoing idiosyncratic, strangely-dressed and sometimes even Glinda-like appearance (Think of The Wizard of Oz (1939) created a reason to re-watch the show again because Jane Horrocks' multi-talented acting is addicting.

I didn't like some of the dialog that much - or the writing in general - but the story is good. Just to see Ms. Horrocks gave it a presentation it would not otherwise have had. What a talent! Maybe the movie could have used another director?
One person found this helpful

R. J. MarsellaReviewed in the United States on December 8, 2009
4.0 out of 5 stars
Unusual and Surprising Film
Verified purchase
I had recently seen the play "Rise and Fall Of Little Voice" on stage in London and really enjoyed it so I couldn't resist seeing the film version with Michael Caine to compare. The film exceeded my expectations. The story of an introverted girl who mimics famous vocalists and her boozy loud and obnoxious Mom is incredibly well written and the actors in the film version are all terrific. This is a sad tale of desperation and family strife with some elements of dark comedy provided by Caine and the small time show biz type he represents. The surprise is the musical performance of Jane Horracks in the title role. She is fantastic. If I had to say which was better the film or stage version- I'm not sure I could pick. They were both great.
4 people found this helpful
See all reviews
Back to top
Get to Know Us
Make Money with Us
Amazon Payment Products
Let Us Help You
EnglishChoose a language for shopping. United StatesChoose a country/region for shopping.
© 1996-2021, Amazon.com, Inc. or its affiliates