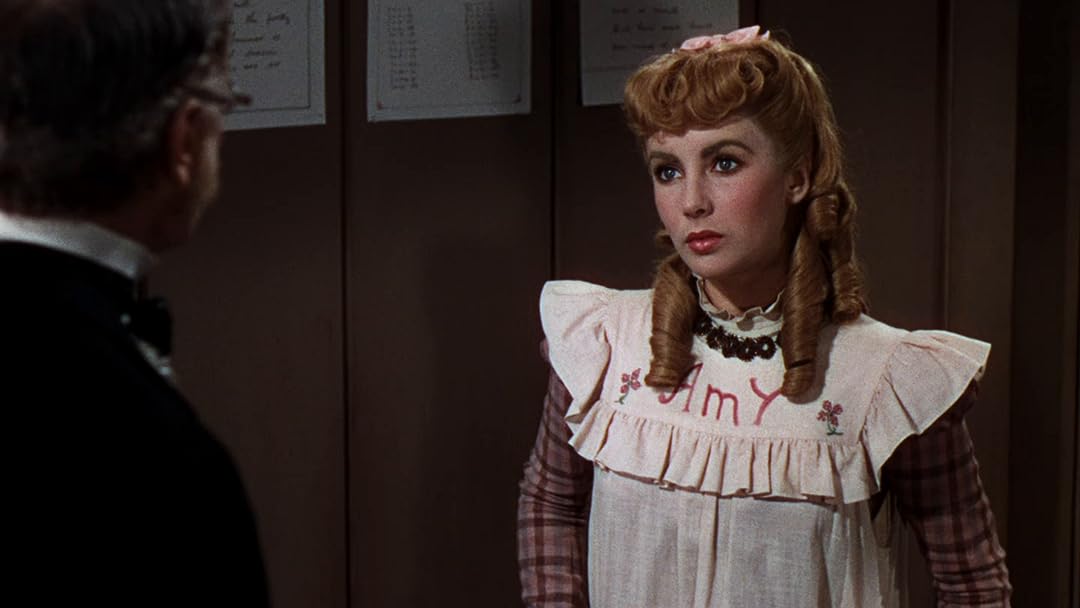 Kelley PhillipsReviewed in the United States on July 19, 2019
5.0 out of 5 stars
The Best of the Best
Verified purchase
This has always been, and probably always will be, my absolute favorite retelling of this heartwarming, classic story. As much as I adored the 1994 version and even the 1933 version to a lesser extent, there's no topping this one. June Allison's Jo is second to none! It's almost as if the role was made just for her. Her performance was perfection as was the rest of the cast's.

Elizabeth Taylor nailed the role of Amy and though she appears older in this version than Beth is, she more than makes up for that with her petulantly adorable performance in the first half of the film and her personal growth in the second half is both beautiful and bittersweet.

Janet Leigh did a spectacular job as Meg and Margaret O'Brien was precious from beginning to end. Beth has always been my favorite aside from Jo and O'Brien was a joy to watch.

This film is by far the one I can empathize with most. While the acting is a bit melodramatic and "outdated" compared to today's standards, it's honestly so refreshing and genuine. Good screenwriting is, sadly, a dying art it seems. Modern filmmakers tend to focus more on cheap gimmicks, CGI, sex appeal, and snarky one-liners that half the time fall flat on the audience's ears. I think they forget that sometimes less is more. I miss the days when films required little more than really talented actors to make them great.

This film doesn't need special effects, loud noises, or skin-tight outfits to make a statement. I could feel Jo's desperation to keep her family together, her fear of the unknown, and her grief for the loss of innocence. Every cast member had the talent and the skill to keep the story going even on their own, but together they created one of the most beautiful works of art in all of cinematic history.

Spring Time BirdieReviewed in the United States on January 16, 2017
5.0 out of 5 stars
"My" Little Women
Verified purchase
This is the film version I grew up with. My sister and I would wait for it to come on around Christmas time on our local channel and we always sat glued to the TV when it made its annual appearance. I have seen the 1994 version and I did like that very much as well, but I still feel that this 1949 version was perfectly cast with June Allyson, Janet Leight, Elizabeth Taylor and Margaret O'Brien. What a cast! It is very faithful to the book, except, of course, in the book Amy is the youngest, and here it is Beth. From what I understand, the studio that made this film really wanted Margaret O'Brien cast, and that's what they did-switched Beth and Amy, and I for one, think it works perfectly. The cinematography is beautiful and Peter Lawford as Laurie is just heartbreaking when he professes his love to Jo. I think even in one of the final scenes, when he returns from Europe with Amy as his bride, you can still see the love he has for Jo. Wonderful version that I will watch all the time. I have it on my ipad and my iphone so when I'm stuck on public transportation, I can be transported back to Concord and my Little Women.
55 people found this helpful

Mary TeresaReviewed in the United States on April 14, 2020
5.0 out of 5 stars
Much better than 2019
Verified purchase
I watched 2019 last night, and felt disappointed especially at the direction, so I watched this version today to replace it in my head. Now Little Women is back in its rightful place! OK the sets are a bit staged, too pretty-pretty perhaps, but it's almost perfectly cast.
June Allyson is the Jo March of the book.
They all wore bonnets and had tidy hair, which would have been important back then. Though it skips the famous falling-out of Jo and Amy, I still think this is the best version. They got it.
15 people found this helpful

Don QuixoteReviewed in the United States on October 14, 2020
4.0 out of 5 stars
The First Color Version of Alcott’s Classic
Verified purchase
Last week I reviewed the 1933 version of _Little Women_, directed by George Cukor and starring Katharine Hepburn. I refer you to that review for more details. This review will be a brief (for my standards, at least) comment on the 1949 adaptation, directed by Mervyn LeRoy and starring June Allyson, Rossano Brazzi, Elizabeth Taylor, and Janet Leigh.

Let me begin by saying that LeRoy’s film is, primarily, a Technicolor version of the 1933 film. The actors are, of course, different, but the script is the same. There is only one “original” scene in the 1949 version: we see the March sisters going to a store to buy presents after Aunt March gives them money. As one critic rightly observed, the scene is meant to exalt consumerism during the prosperous post-WWII years. By making money circulate, one helps the economy. The money, supposedly, comes back to you eventually… This scene is not in the novel, and it would have been anachronistic in Cukor’s film, which was released during the Great Depression and emphasized the need for families to stick together during hard times. _Little Women_, incidentally, rings truer during troubled times, as the novel is set in the time of the Civil War. In our relatively (or apparently, however you want to look at it) peaceful time, the latest adaptations have chosen to highlight social issues such as women’s rights and societal privilege.

One of the main criticisms leveled at the 1933 version is concerned with Katharine Hepburn’s performance, which many viewers consider to be over the top. I must say I agree, though as I pointed out in my previous review, this does not diminish Katharine Hepburn’s worth as an actress. Those who have reservations about Hepburn’s Jo may approve of June Allyson’s magnificent performance in the 1949 version. Hepburn’s influence on it is noticeable, but Allyson delivers a more balanced performance.

Another issue with the 1933 version had to do with its pace, which to me seemed a bit rushed towards the end. This remains the same in the 1949 version. Professor Bhaer makes his first appearance roughly at the 1:30 mark, that is, three quarters into the film, and many important developments occur within the last ten minutes of the movie. This version, incidentally, exhibits the smallest age different between the actress playing Jo and the actor playing Bhaer. Allyson and Brazzi were born only one year apart.

Cukor’s version omits the manuscript and the skating incidents. (As in my previous review, I am being purposely obscure to avoid giving away important plot points, though I don’t prioritize plot when I watch movies.) LeRoy’s version follows this convention, and there is also no mention of the Pickwick Club here. We do hear, however, the reason why Mr. March lost money, something that is omitted in the 1933 adaptation, and the 1949 version also adds a minor anecdote about Laurie running away from school to join the army under a different name.

My assessment: the LeRoy version is an improvement over the previous one when it comes to the acting, but it seems that the producers’ main goal was to colorize Cukor’s film. We are even shown a rainbow, to drive the point home. Some scenes are reproduced almost shot-by-shot, most notably the school scene: the teacher is even played by the same actor, who according to imdb.com wears the same outfit and holds the same board with the same writing on it. It would be 45 years before the next adaptation of Alcott’s classic was released. This version, directed by Gillian Armstrong and starring Winona Ryder, is my personal favorite. It is faithful to the text and adds to it without falling into facile opportunism the way the latest adaptation does. LeRoy’s version, then, is my second favorite.

Next on my list, something completely different: _In Cold Blood_ (Richard Brooks, 1967).

Thanks for reading, and enjoy the film!
6 people found this helpful

franReviewed in the United States on February 9, 2020
5.0 out of 5 stars
Still the best Little Women!
Verified purchase
My daughter and I had just seen "Little Women" (the new version); she loved it. I said the '49 film was much better. So I had to order a copy. Watched it and confirmed my opinion. What a wonderful movie! Loved all the actors, the sets, the general feeling. Unfortunately my daughter had gone back home by the time it arrived, so I'll have to wait until she returns for her to see it.
3 people found this helpful

CindyReviewed in the United States on September 30, 2017
5.0 out of 5 stars
A great telling of a truly wonderful story
Verified purchase
This is my all time favorite version. Fine acting all around.. I have been to the home that is the background of this film and saw where it was written. It made it just pop for me. Can't improve on great acting and memories of time past.. A classic all the way around..
13 people found this helpful
See all reviews
Back to top
Get to Know Us
Make Money with Us
Amazon Payment Products
Let Us Help You
EnglishChoose a language for shopping. United StatesChoose a country/region for shopping.
© 1996-2022, Amazon.com, Inc. or its affiliates