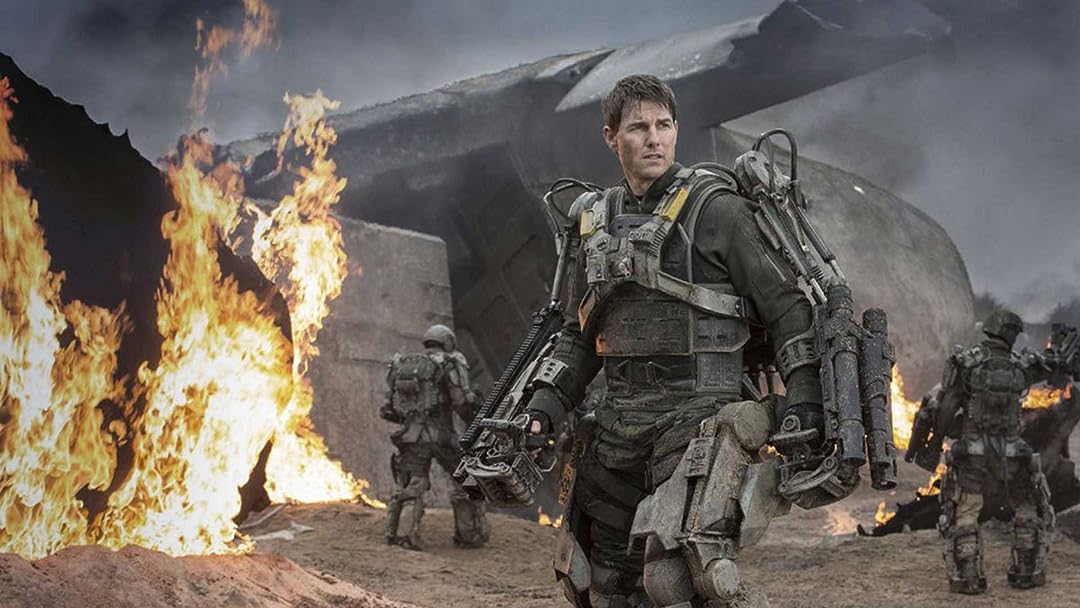 Lt. Frank BullittReviewed in the United States on July 6, 2022
5.0 out of 5 stars
Fantastic movie, Flawless 4K execution
Verified purchase
I’ve been counting down the days until my pre-ordered Edge of Tomorrow 4K disc arrived. I was a little disappointed that it wasn’t an earlier 4K release, but I literally fist-pumped when I saw the pre-order announced. I’ve been replacing my standard Blu-Ray collection with 4K discs as they become available. Some are absolutely fantastic, some are barely acceptable. I’m probably up to around 100 4K discs now, but I don’t think I’ve wanted to see another 4K release this much. Here’s why:

I’m a little surprised that Edge of Tomorrow wasn’t a bigger hit. It’s a nearly perfect sci-fi film with everything going for it. It’s funny, action-packed, great cast, and good writing with a great storyline. It’s even got romance if that wasn’t enough.

Blunt and Cruise have great chemistry and they match each other’s energy level perfectly. It’s hard for Tom Cruise to be upstaged in a film, but Emily Blunt manages to pull it off. If you didn’t know better, you would swear she was the bigger star just by her presence on the screen. Sadly this is the time we see Bill Paxton in a major movie, but he absolutely nails his performance. The amazing thing about him is that he never outwardly tries to be funny in this role; he just is. The ensemble cast is better than your average sci-fi film and everything just works.

The 4K presentation is very good. It’s not quite a reference disc like Dune or the Revenant, but that’s due more to the source material. There just aren’t many bright colors to take full advantage of the UHD format. Fortunately the black levels look fantastic, which is good because there are a lot of them. I’m very happy that I switched over to an OLED TV to take full advantage of a film like this. The resolution is great, with only the slightest hint of grain in a few shots. The resolution is so good that I even noticed the limits of the CGI in one scene that I hadn’t noticed before.

The audio is fantastic. Vocals come through clearly with a very immersive sound experience. There are definitely other films out there with more active surround effects, but they often seem contrived. This audio experience feels very natural. One of my favorite effects is Cage running around a dune circling the mimic. It’s spectacular.

This is one of my top five favorite sci-fi movies of all time and I’m happier than ever to have it on 4K. If you already have the Blu-Ray and a good 4K upscaling player, you may not notice that much of an improvement, but it is there. I’ve noticed a few split-second flaws here or there in many 4K releases, but I didn’t pick up on a single one in Edge of Tomorrow. If you love the movie, you owe it to yourself to get the best version out there and this is absolutely it.

DaveReviewed in the United States on September 19, 2022
5.0 out of 5 stars
Great movie and the 4k video brings near reference audio.
Verified purchase
Great movie and the 4k video brings near reference audio in addition to great hdr and 4k video. One thing of note is that the bass is turned down just a bit vs the blu-ray version which is noticed during the opening sequence, however, the atmos imo more than makes up for its absence. This wins hands down vs the standard blu-ray, however, it's a tough call when comparing it to the 3d version if you have a capable projection system. I think there's room for both the 3d and 4k version in your library if you have the proper home theater set up.

Yes I watched this last year during my sci fi week. Yes it's still a great movie and yes...I know it's based on an anime. Did I mention I love time loops? This one is arguably better than Groundhog Day even. Fight me I don't care.
One person found this helpful

Goose16Reviewed in the United States on July 31, 2022
5.0 out of 5 stars
Masterful
Verified purchase
This is one of my favorite movies. I have had it for years on standard bluray and have seen it countless times. The 4K presentation is a worthy upgrade. For home theater and AV enthusiasts, to be frank, get the movie. The audio is demo-worthy. Those with a capable subwoofer will be impressed with the LFE throughout this movie. Subs will get a workout. The dolby atmos track is another standout. It is active and very dynamic. Video quality is very good. There is some grain but this is a clean movie. And, there is plenty of detail. Contrast is far better than the standard bluray and the blacks are especially deep with excellent detail in darker scenes. The story itself is quite good. It is easy to be pulled in and remained hooked the entire movie. Absolutely excellent 4K presentation and a worthy addition to any movie collection.
4 people found this helpful

Tony P.Reviewed in the United States on September 20, 2022
5.0 out of 5 stars
Nearly Perfect
Verified purchase
Tons of action. Great performances from Cruise and Blunt. Excellent story arc and character development. I love this movie!

Philip MignanelliReviewed in the United States on September 6, 2022
5.0 out of 5 stars
One of Cruises best!
Verified purchase
Kind of like Groundhog Day, with aliens! 4K CANNOT make a mediocre movie better, but use it with a great movie? OUTSTANDING!

Steve ClarkReviewed in the United States on August 18, 2022
5.0 out of 5 stars
Great sci-fi movie
Verified purchase
Not much to say other than this is a great sci-fi movie with an interesting plot. Kind of “Groundhog Day” meets “Black Hawk Down” meets “Independence Day”. Fun movie, great action, good cast. The 4K looks and sounds incredible, definitely an upgrade over the Blu-ray copy I’ve had for years.
One person found this helpful
See all reviews
Back to top
Get to Know Us
Make Money with Us
Amazon Payment Products
Let Us Help You
EnglishChoose a language for shopping. United StatesChoose a country/region for shopping.
© 1996-2022, Amazon.com, Inc. or its affiliates