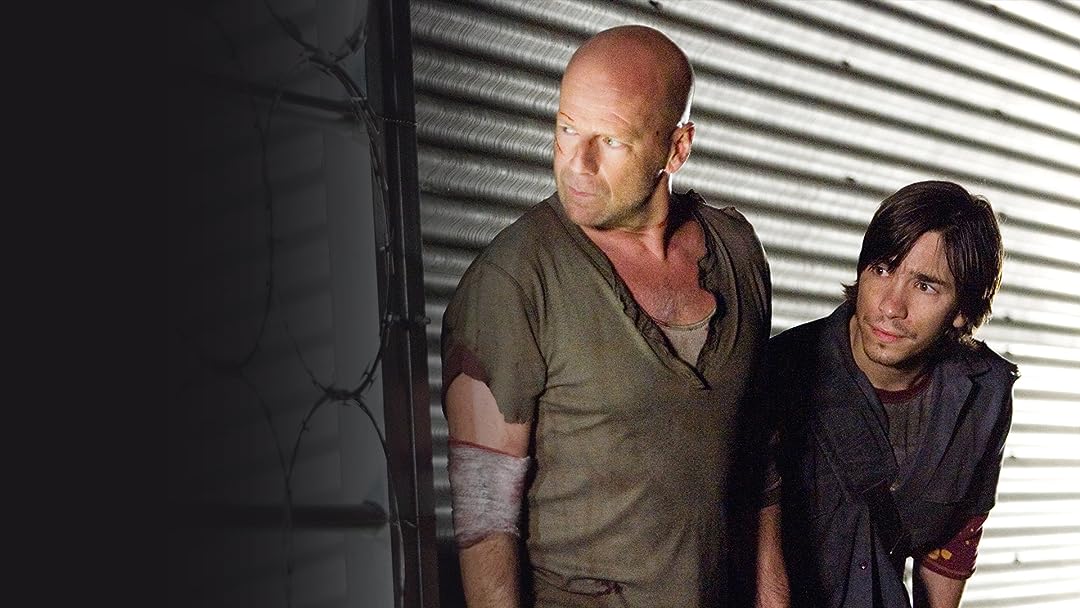 A PhillipsReviewed in the United States on June 27, 2020
5.0 out of 5 stars
One of the better Die Hard sequels
Verified purchase
With the Die Hard movies, you really can't think too hard on them. All aboard the fun train, leave logic at the station.

That said, this installment is more of the same. John McClane punches and shoots bad guys. Shoots off tough guy one liners and threats. Survives things normal humans can't.

All unrealistic, but that's what we are here for. Gunfights, car chases, things blow up. This time, he's dragging around a confused and mostly terrified young hacker as he tries to stop bad guy hackers.

We're just here for the fun and the action, and this movie delivers. It's not as good as the 1st one, sequels so rarely are, but it is one of the better sequels.

To me, the contrast of McClane's unrealistic survival abilities and cool headedness in comparison with the much more realistic reactions of our young hacker, Matt Farrell, played with some humor by Justin Long, is a bit of a wink to the audience. Yes, this is over the top, but you love it anyway.

The main bad guy, Thomas Gabriel, played by Timothy Olyphant, is fun to watch, even if he comes across as a bit of a moustache-twirler. The introduction of McClane's daughter Lucy gives us more McClane, just in a female form now.

Fun, fun, fun. Story isn't a complete trainwreck, touching on the evils of technology. But it doesn't get in the way of what we are here for, and that is to see McClane run his mouth and kick butt.

seanReviewed in the United States on April 22, 2020
1.0 out of 5 stars
Complete and utter waste of time.
Verified purchase
The writing for this movie was completely and utterly terrible, from the predictable lines to re-used action shots. Wrought through and through with massive plot holes and scenes so far from any semblance of reality or plausibility it makes it far from enjoyable. The first major mistake was so laughable and so early in the movie I almost turned it off right then but on the other hand it was so bad it couldn't get worse, right? Oh boy was I wrong. Approximately every 3-5 minutes there was something even more egregiously asinine. Don't get me wrong, I laughed enough at this to add 20 years to my life. Every little thing, from a teenage hacker using less keys on the keyboard to hack the pentagon than I use to type my email password to an F35 fighter jet shooting missiles in the city to blow up bridges he's CURRENTLY FLYING UNDER, is absolutely painful. Oh and PSA, never ever under any circumstances go skydiving with the director of this movie, he doesn't believe in physics. If anyone gets around to inventing a time machine let me know, I want my time back.
12 people found this helpful

essolunapapaReviewed in the United States on December 21, 2019
5.0 out of 5 stars
Best Action Flick Ever Seen
Verified purchase
The idea behind this movie and all of the action scenes made this movie by far the best action movie I have ever seen! It had me on the edge of my seat from start to finish. How on earth they made and filmed the numerous action scenes is beyond me. Numerous vehicle chases and crashes, fighting and shooting scenes, explosions, bridges being blown up, bad guys falling to their death or being chopped into pieces, not to mention helicopter crashes, and jet aircraft being knocked out of the sky causing the pilot to eject! What more could you ask for, a great plot idea, the continuation of the John McClain sagas, and more great action scenes with outstanding cinematography! I give this movie 10 stars on a scale of one to five.
7 people found this helpful

joel wingReviewed in the United States on April 11, 2020
4.0 out of 5 stars
Tries to keep Die Hard series up to date with McClane fighting criminal hackers
Verified purchase
Live Free Or Die Hard was the fourth in the series still featuring Bruce Willis as Detective John McClane. This time he faces off against computer hackers led by Thomas Gabriel (Timothy Olyphant) and his assistant Mai Linh (Maggie Q) that threaten to hold America’s infrastructure hostage. To stop them McClane gets his own hacker Matt Farrell (Justin Long). The movie was an attempt to keep the Die Hard series up to date. In the first three movies McClane had taken on terrorists and mercenaries. Now he was fighting criminal techies.

The movie maintained its two mainstays in the franchise, lots of action and some comedy to keep things light. Right at the start when McClane is told to pick up Farrell he’s intercepted by some of Gabriel’s henchmen resulting in a huge gun battle inside Farrell’s apartment building. Afterward McClane and Farrell start making wisecracks about each other.

Basically if you like any of the Die Hard films you’ll like this one.
C
5 people found this helpful

Original Toe KneeReviewed in the United States on November 30, 2020
1.0 out of 5 stars
Unbelievable
Verified purchase
So, I guess the near 5 star rating average for this film proves that audiences WANT to watch films that have no basis in reality. Ok. but leave me out of it. The franchise "Die-hard" was based on an ALMOST BELIEVABLE story in the FIRST Die Hard movie. Since then, the "action" and cgi and special fx have conquered even the most discerning viewers... so it goes... Is the American audience really this brain dead? I guess some day I will surrender as well... But I had to leave once I realized I could predict the whole story right after he "shoots down the helicopter " with his squad car... wow. So grateful I still value my time enough to know I can't stay asleep and watch another movie where I already know the ending. Hint; IN the next Die hard, if there is another one, just kill off the lead character early in the film , role credits and apologize to anyone who notices the movie is different.
5 people found this helpful

turkeygirlReviewed in the United States on December 18, 2020
2.0 out of 5 stars
Two and 1/2 stars
Verified purchase
It was an exhausting movie to watch, especially feeling unwell with a headache. I've watched all the Die Hard movies and enjoyed them, this one really wasn't that enjoyable - it was stressful. It had moments but mostly it was impossible survival scenes that somehow both McClain and Matthew were able to survive and not be a bloody hobbling mess, until the very end. I understand that with sequels they need to make it bigger and better but this one really jumped the shark with the power plant explosion, the chopper ride McClain and Matthew took, and the massive interstate take down - right! If they could have toned it down just a wee bit it would have been good. And if they could have not said Gd or taken the Lord's name in vain every whip stitch that would have been better. I think they said Gd more in this one then perhaps the first one and another one combined together. It was their one constant in the dialogue. And finally, I can't believe they didn't have this guy Gabriel search John McClain's history with foiling heists. Of all the constants in the series, they broke that trend. It would have made a great specter to the times they thought they'd killed him but failed. Oh, and they had Matthew starving and they could have had him eat the Snickers bar in the car but they didn't. Neither did they eat or drink or pee. They just ran and fought for 24-72 hours. They really could have made it better if they'd just slowed it down.
One person found this helpful

LolCatReviewed in the United States on December 16, 2020
1.0 out of 5 stars
Trash
Verified purchase
How the hell does this garbage have such a good rating? The hacker scenes are as laughable as most Hollywood renditions, and the fights are just ridiculous.

The scene that really got me, was the one with that Asian chick (Maggie or something?) towards the end. Ignoring the reality that a 130lb woman would get absolutely crushed by a man like Bruce Willis (kung fu or not), they made her literally superhuman; she didn't seem to be incapacitated or even fazed by getting hit by an SUV going 40 MPH, getting slammed through multiple objects and glass panels while on the hood, and then getting smashed between a brick wall and the car. This is almost Terminator-level durability, and it's dumb as hell. Any normal person would have been dead or grievously injured just by that first impact. How stupid does Hollywood think we are?
2 people found this helpful

Kristina BrockReviewed in the United States on May 13, 2016
5.0 out of 5 stars
So good I am going to go watch it again...
Verified purchase
Maybe it is because I am a child of the 90's that this movie gave me all the warm and fuzzies inside. Maybe it is because I just love seeing Kevin Smith being anybody who is not Silent Bob, that this movie made me giggle and laugh like a geek at Comic Con. And just maybe it made me sit on the edge of my seat during the action scenes because I think Bruce Willis would beat Chuck Norris any day of the week.

But, most likely the movie is just that good of a movie cause all three of those things come together to drag along a rather amusing Justin Long on a chaotic, end of the world, tech driven, edge of your seat, action packed, journey.

Watch it. You won't regret it.
21 people found this helpful
See all reviews
Back to top
Get to Know Us
Make Money with Us
Amazon Payment Products
Let Us Help You
EnglishChoose a language for shopping. United StatesChoose a country/region for shopping.
© 1996-2021, Amazon.com, Inc. or its affiliates