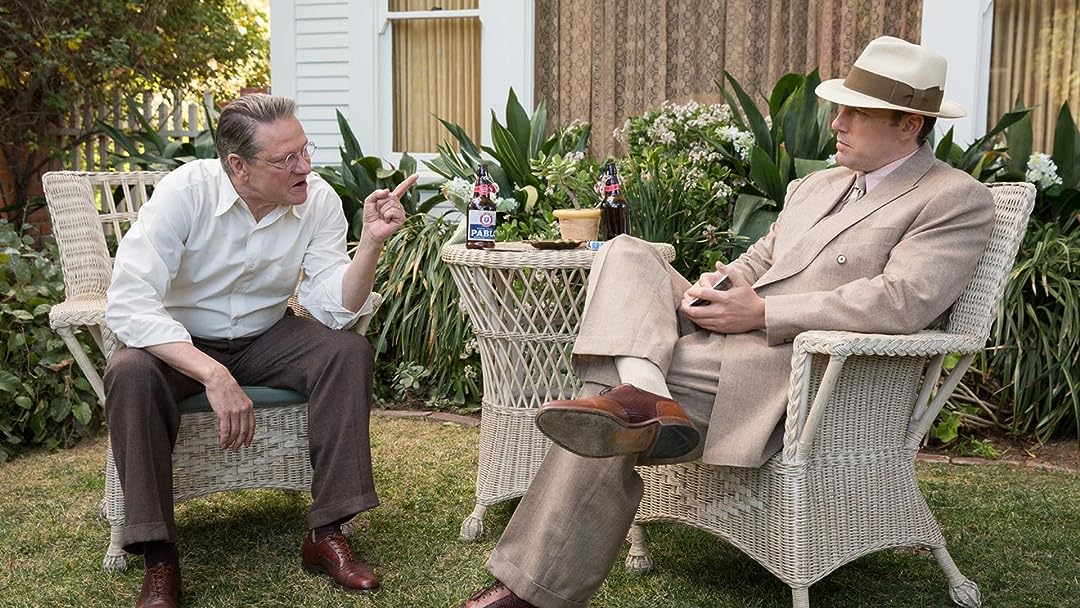 (2,034)
2 h 8 min2016X-RayR
A story set in the Prohibition Era and centered around a group of individuals and their dealings in the world of organized crime.

Peter A. CohenReviewed in the United States on March 21, 2017
5.0 out of 5 stars
"Heaven is now...."
Verified purchase
Most movie critics live by night, but what they actually do is not write about cinema. I will go out on a limb here and buck the general consensus. "Live by Night" is Affleck's finest film to date. It isn't only the acting, it isn't only Zoe Saldana that could make 100,000 ships sail, it isn't only Chris Copper and Elle Fanning's brilliant performances, it is the theme of this film. A theme missed by almost all critics. This is NOT "The Town,"
a worse film than this one, though still noteworthy. Almost like Ewan McGregor's "American Pastoral," this is a film about a man who makes up his morals as he moves along life. "Live by Night" is an old gangster expression about the gritty life of blood that took place after dark; it is also about people living by their own personal dark night, "night" as a metaphor. There is a story here for those who bother to actually watch the film. It is about a man who rises to wealth among foreigners, not his people, the Irish. A man who would shoot a woman abuser, but never shoot a woman. He hates racism and is chivalrous in a fashion, and that paradigm leads him to find love with the Cuban daughter of his rum supplier (Zoe Saldana). This is no love for a day, but middle-class home love. He will swear by it, as much as he will swear to crush his Irish nemesis, Albert White (Brendan Gleeson). He is betrayed throughout his hard Boston life, but finds honesty and stability among the Cubans in Tampa who never betray him. This is not ethnically-correct filmmaking, it is the very accurate story of how old stereotypes die less hard than believed. In this way, Coughlin (Ben Affleck) is a hero; his father thinks he is a wise ass, not becoming a respectable policeman and has his crew beat him up to make the point. As Coughlin says over and over again, "I am not a gangster, I am not a hit man". He makes money not to make money but to survive and eventually to allow his family to survive. This gorgeously shot film (you can get the Cinematographer right off the bat) is not maudlin. Coughlin's love for his wife is absolute and unassailable, as is his love for his son. There is nothing cheap, clichéd or embellished when he breaks down when his wife is shot dead, and when he has her buried in her native Cuba. This IS a thinking man's film, no matter what the critics say. About redemption, repentance, evil, good, love and destiny. As Coughlin says (what he learned from his father and from his partners), "Heaven is now" meaning not after death and not next year, but now, in the moment. And if you do not watch this film with respect and follow the theme portrayed here, I am afraid you will lose that moment. Affleck (like Quarterback Tom Brady in some ways) is not well-liked in some quarters. Yes, he is stolid and speaks what is on his mind (not rare in Falmouth or Boston or Marblehead). Let him speak to you in this movie. In my opinion, Affleck has pulled one over on the critics and they just refuse to see it.
15 people found this helpful

BreaReviewed in the United States on July 21, 2022
5.0 out of 5 stars
Great purchase
Verified purchase
I enjoyed this movie . Buying Movies is something I feel like is a waste of money and I’ll do everything in my power to watch a movie for free . I was highly satisfied with this purchase . I watched it multiple times . Super sad ending omg… I love a good underdog film . Now I want to wat h this movie lol

James MReviewed in the United States on April 21, 2017
3.0 out of 5 stars
Affleck - The Gangster Thief Politician
Verified purchase
My knee jerk reaction to this movie was that Ben Affleck made a movie about how he sees himself real life. But then again... I think he did that with Argo and The Town as well. So he sees himself as a political gangster thief, acting out his personal beliefs in his films. Personally I find him fairly flat and one dimensional yet I have to admit I like 90% of the movies he is in... go figure. That probably speaks as much about the types of movies he is in as it does to any sort of acting prowess.
Live by Night is a good movie not a great movie. I am especially attracted to "period" films and television. It was done well from that perspective with great attention to detail. Yet I think the movie drags a little too much in places and while some of the character development is good and it is punctuated at times by some gritty action... all told I almost fell asleep at times and I wasn't tired.
IMDb outlines the plot as follows "A group of Boston-bred gangsters set up shop in balmy Florida during the Prohibition era, facing off against the competition and the Ku Klux Klan." But the deeper story is that Joe Coughlin (Affleck) returns from the war disillusioned by the sense of leadership that sends men to their deaths without any sort of thought whatsoever. He remarks in the film several times that he is not a gangster and that he is done "kissing rings". Nevertheless... a gangster he is as he shoots and extorts and leverages his way through Florida to take over the rum trade while seeking retribution for a personal wrong that was done to him.
Lots of death and violence with a high body count, brief sex scenes but nothing graphic and a flash of a nude woman in a photo. The language is hard core with the S and F word and the N word used for African Americans. Good performances by Chris Messina, Chris Cooper and Matt Mahar.
The movie stops and starts and drags you kicking and screaming through a tortuous plot where Affleck wants you to love his character and then hate him... In the end the movie should have concluded about 40 minutes before it does and the final resolution is pitiful and unnecessary. Worth a watch if you are an Affleck fan but be prepared for a long drawn out movie that will probably leave you a little bit let down in parts. Affleck is indeed no Batman.

Amazon CustomerReviewed in the United States on June 24, 2022
5.0 out of 5 stars
Loved the movie!
Verified purchase
I really enjoyed the movie!

BenjiOmamaReviewed in the United States on October 20, 2017
4.0 out of 5 stars
Why all the shade???
Verified purchase
The reviews that I've seen were terrible and I can't understand why. Let me break it down.
- Story: Ok its not American Gangster or Scarface, and it is a little rushed in the beginning as far as a "from the bottom to the top" progression but it does keep you engauged thoughout without feeling like its too fake.
-Cinematography: Truely excellent! Think Lord of War or The Aviator. Noir and authentic timepiece everything. Multiple running angles an all like the Revenant.
-Sound an music: Pretty decent, but the music and effects drown out the spoken audio somewhat. Had to watch with sub's 1st time, especially when foreign accents were used. But nice symphonic soundtrack that works.
-Replayability: I've seen it 4 times still love it. Doesn't have that "once you know what's happening it's old the second time feel.
I've read 7 reviews on 3 sites, can't say I've heard one good argument for the shade, other than they just didn' like Ben Affleck. They should see The Town. Bought it on a whim for a good price and as someone who has seen 8,500 + movies it's a keeper!
24 people found this helpful

joel wingReviewed in the United States on August 19, 2021
3.0 out of 5 stars
It's up and down because it tried to do too much
Verified purchase
Live By Night is a bit of an up and down crime drama featuring Ben Affleck as a small time crook who makes it big time. The first part where he’s a nobody is the best. He does some robberies, gets into some gun fights, mixes it up with some powerful gangsters. The second part where he makes it isn’t as strong. It’s just not as consistent because they tried to throw in too many storylines. There is one amazing scene where he confronts the local head of the KKK however.

Russell SReviewed in the United States on April 17, 2017
4.0 out of 5 stars
Very nice gangster movie for all the gangster movie fans. Add this to the list.
Verified purchase
Despite being the son of the Boston Police Deputy Superintendent. Joe’s not all bad. Unlike the gangsters he refuses to work for, he has a sense of justice and an open heart, and both work against him,Driven by a need to right the wrongs committed against him and those close to him. He falls in love with a woman who is seeing a bigger gang man and it costs him. This movie is a pretty good low key gangster movie that will keep you interested and wondering when the next curve ball is coming along. I was very impressed with the story, the acting by all involved and especially with Ben Affleck, he plays the part to low key perfection. I can't tell you too much because I don't want to run a spoiler but I loved the pacing of it and the eventual resolution was totally satisfying to me.

ukemanReviewed in the United States on June 11, 2021
2.0 out of 5 stars
Why can't they do it right?
Verified purchase
This had the feel of something that could've been great; like the period piece crime drama series on HBO, Boardwalk Empire. A movie can never do a subject justice like a series, but even for a movie this one fell on its sword due to writing.
I could tell as soon as the beautiful black lady appears, in Miami, with the clothes and hair style of a high class fashion model. Then the dumbing down of the southern white men, using all the tropes of KKK clownsmen.
When Hogans Heroes tv show featured Col Klink and his bald superior with the eye glass, you knew it was a comedy; it was funny. But the hair-lipped RD, and Officer Figgis, taking a cane to the behind of his adult daughter for prostituting, and ole Ben Afleck marrying the fashion model like it was the real American dream love story, especially during the Depression (1930s)... you realize this is not a great crime drama, nor a comedy, its another Hollywood elite, Critical Theory, social engineering psy-op.
When big bucks, highly paid actors, good actors, and incongruent writing combine for a movie, it is only going to succeed as far as the public will buy into the narrative.
One person found this helpful
See all reviews
Back to top
Get to Know Us
Make Money with Us
Amazon Payment Products
Let Us Help You
EnglishChoose a language for shopping. United StatesChoose a country/region for shopping.
© 1996-2022, Amazon.com, Inc. or its affiliates