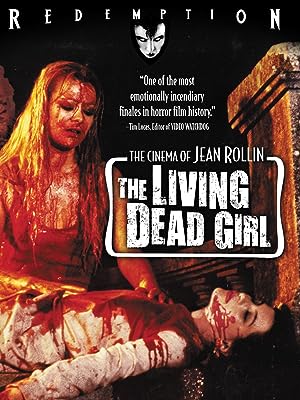 (116)
5.71 h 30 min198218+
THE LIVING DEAD GIRL is the story of Catherine Valmont (Françoise Blanchard), a wealthy heiress dead before her time, who is accidentally reanimated when some unfortunate movers attempt to store drums of chemical waste in the neglected burial vaults below her uninhabited chateau.

Mark C. JonesReviewed in the United States on July 25, 2021
3.0 out of 5 stars
Thoughtful Zombie Movie Is Nostalgic For France's Lost Past
Verified purchase
The zombie in this movie wanders around and looks at the ruined rooms of the castle she used to call her home. It's falling apart and French real estate agents are showing it off to prospective, mostly stupid American buyers. The reason she's come back to life is that her corpse was exposed to industrial waste. The big ugly factory that discharged the waste is (we are to assume) big and ugly because modern France has forgotten its glorious past of art and culture and has instead industrialized in order to keep up with America.

So the movie the works unexpectedly well as a social commentary despite an NC-17 amount of gore and nudity. The zombie needs blood to survive but she is repulsed by her need to kill live victims and drink their blood. She like modern France is doing what she needs to do but she is forever reminded of her happier and more dignified past even as she does it. She's like Tess of the d'Urbervilles only with more curves and (literally) killer nails.

That being said, the movie is otherwise an ultraviolent exploitation flick. The make-up effects are gruesome in the extreme but very crude. Even by early 1980's standards, the effects are way behind the times. The transfer is acceptable, but this DVD version has the same picture/sound quality of a very average VHS tape.

The acting is for the most part amateurish. The dialog is very clumsy. The first 15 minutes should be grabby, but in this movie they're the worst part of the film. So be prepared for a weak beginning and stick with it because the movie definitely improves once Zombie Girl comes to life and starts killing people.

Finally, I will say that many of the women who disrobe in this movie have very natural looking figures. I'm guessing this movie was made right before so many very fake-looking hard bodies with collagen and silicone implants began to appear in many 80's movies. This movie reminds us that women don't have to get buffed up to look attractive.

Zillaman67Reviewed in the United States on September 26, 2021
4.0 out of 5 stars
An Underrated Gem of a Zombie film
Verified purchase
Firstly, this (along with Grapes Of Death) is one of Director Jean Rollin's more accessible films. It isn't a Soft-Core Vampire Porn, which is refreshing in itself (not that there is anything wrong with Soft-Core Vampire Porn). The 2 aforementioned films and 'Demoniacs' are 3 of his best films regardless IMO. The 'Iron Rose' is also interesting but falls short for a Rollin film. The beautiful actress in that one along with the atmosphere make it worth seeing at least once. I won't go into Plot Details with 'Living Dead Girl', because you can read any of the 100 other reviews on this page if you want that. But I never could understand why people would put (detailed) Spoilers in a 'Review' anyway. Suffice to say, this movie is ahead of it's time, has a gorgeous actress playing the lead role (and yes--you'll see her naked), has plenty of early-80's type gore, AND this movie was cool enough to inspire a song by none other than Music/Horror Extraordinaire Rob Zombie! That should be enough to warrant purchasing it! The Transfer is gorgeous (the best one yet), and it has both English and French Dubs of the dialogue. So if you've been on the fence about adding this to your collection, rest assured you'll be glad you did!

Robert FisherReviewed in the United States on July 13, 2016
4.0 out of 5 stars
A young woman becomes a monster. No, it's not the zombie.
Verified purchase
I first saw The Living Dead Girl a few years ago and after reading a new book on Jean Rollin's films, I decided to watch it again. Rollin uses a theme that he also employed in Demoniacs. He depicts a human who is a more monstrous figure than the normally scary supernatural creature. Catherine, a young woman brought back from the dead thanks to a freak accident, can inspire pity as she becomes more self-conscious and repelled by her new desire for human flesh. Her dearest friend Helene is the frightening one as she starts procuring victims for Catherine. We hear much about the healing power of love but in Helene's case, her love for Catherine turns her into a sociopath. The Living Dead Girl is an unusual but powerful take on zombie films.
6 people found this helpful

mReviewed in the United States on April 4, 2013
4.0 out of 5 stars
Another Fantastic Display of Art House Euro Trash
Verified purchase
Jean Rollin, French Horror Sexploitation Auteur hits hard with a Zombie-Lesbo love tale about a ressurected woman, Catherine Valmont (Fransoise Blanchard) and her long time girl friend Helene (Marie Pierro) and their exploits of lust-filled murder, kidnapping and the consequences that follow.

Foolish Grave Robbing Thieves, who also dump toxic waste meet their eye-gouging demise with the beautiful Living Dead Girl after a small tremor awakens her from her coffin. After Catherine racks up a 3 man body count, she wanders the beautiful French country side barefoot and only wearing a white gown and is photographed by a tourist and her husband. The tourist woman becomes obsessed that this Living Dead Girl is the young Catherine only back from the dead and confronts her. After a few more naked dead people pile up, Helene unsuccessfully attempts to feed Catherine with a dead bird, then kidnaps a random woman and gives her to Catherine who then tears the victim apart.

Most fans of Rollin expect his films to be loaded with French styled gore and nudity and also are aware of the slow pacing in between scenes. Such is the staple for Euro Sleaze.

The films last 10 minutes kick in to high gear and to honest, it is pretty damn grueling to the degree of saying out loud "what other horror film can offer such goodies"?

(Spoilers)
Catherine then frees her next stripped bare victim and sets her loose, realizing that she is evil and hates herself. Then Helene sets a tourist on fire who flees screaming and jumps off a bridge and chops another tourists head with a midieval axe. Catherine attempts to drown herself in a lake but is rescued by Helene. In Catherine's fury she rips Helene to shreds and devours her with a slow backwards moving camera shot, leaving the blood-soaked Catherine alone in the dark.
5 people found this helpful

M. BartelReviewed in the United States on May 26, 2013
3.0 out of 5 stars
French Horror not for everyone
Verified purchase
In terms of quality the blu-ray is good and i am sure these have their fans, but French horror does not suit me as much. I must admit this was my first of 3 French Horror movies and it is a good film, but i am not versed in French Horror and failed to connect with either the Americans or the woman and her zombie girlfriend.
I enjoy the movie as a Sensual Thriller, but as far as "horror" i felt i was left wanting more. Mild on effects and atmosphere but it does deliver on sex and nudity, this film explores how far a best friend would go for a childhood promise. There is plenty of near sensual bloody action, most of which revolves around our undead female feeding on blood to regain her memories and sustain life. She is not a vampire, though her feeding habits imitate it closely and daylight does not bother her and so much of the action occurs during daylight hours and uses no witchcraft, demons, or other elaborate mystical reasons for these events other than a blood pact made by the two girls as children.
So i would suggest going into this movie looking for the feel of an adult Twilight Zone if anything. There is no bump in the night or mystical talisman to banish eternal evil, no cobwebbed corridors or fog covered graveyards. Just a near lesbian sensual thriller with a chick drinking blood from mostly hot females' throats.
For what it is it is a good movie, but i went into the movie expecting a different experience and style of film.
2 people found this helpful

"I emptied these bodies of blood so that it may flow in mine. To turn me into a living dead girl."
4 people found this helpful

Joe ZReviewed in the United States on April 22, 2014
3.0 out of 5 stars
Intelligent, decent acting, with a twist
Verified purchase
Another reviewer already spilled the beans, so it won't be a spoiler to say a dead girl awakens with a thirst for blood, then develops a hunger for human flesh. Be warned, there is no conventional ending. If you're expecting the girl to die or the villagers to rise up, well, it ain't happening. The cover shows pretty much how this ends. Will she die? Will she go on with her taste for blood and human flesh? Will the villagers track her down? No clue. I'm not teasing. What you see on the cover is all you get. Worth the rental.
One person found this helpful

William AmazziniReviewed in the United States on August 3, 2010
5.0 out of 5 stars
A Zombie Classic
Verified purchase
French auteur Jean Rollin contributed one of the best Zombie films ever made with 'THE LIVING DEAD GIRL'. Using his touches of surrealistic horror and eroticism, the film emerges as a tragic love story between two women, one living and one living dead. Francoise Blanchard is magnificent as the woman who comes back with a penchant for human flesh and blood and Marina Pierro her best friend trying to keep her satisfied by supplying her with living beings. Rollin wraps the surroundings with incredible images and when the shocks arrive, they almost become poetic. Along side his two vampire films 'REQUIEM FOR A VAMPIRE' and 'LIPS OF BLOOD', this just may be his masterpiece and one of the most original Zombie variations up to that time. The quality and color are above average. Highly Recommended.
2 people found this helpful
See all reviews
Back to top
Get to Know Us
Make Money with Us
Amazon Payment Products
Let Us Help You
EnglishChoose a language for shopping. United StatesChoose a country/region for shopping.
© 1996-2022, Amazon.com, Inc. or its affiliates