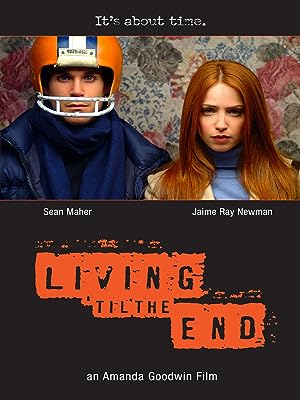 Living 'Til The End

(17)
6.51 h 27 min200513+
Living 'til the End is a dysfunctional romance about a man who is so afraid of dying that he stops living his life, until he meets a woman who is dying, but has made a conscious decision to live her life right up to the end. Jack Whilton (Sean Maher) is a buttoned-down estate planner with a girlfriend, Cynthia, who is anything but.

Michael ReedReviewed in the United States on December 14, 2017
5.0 out of 5 stars
A beautiful hidden gem of a movie!!!
Verified purchase
I gave this 5stars even though I felt a little teensy bit cheated by the ending. But I got past that as this is a really beautiful and very surprisingly good movie that has rocketed to the top of my "Keepers" list. Hint: do not turn it off as soon as the credits start. The little bits during the credits sorta redeem the confusing ending that combined with the soft music left me with a warm glow. Not quite the payoff I hoping for but I'm not going to go into details in case you haven't seen it yet.
I found this movie as I was surfing through the prime titles and wasn't holding out much hope for it but I really like he/she saves him/her movies so I gave it a chance. I'm VERY glad I did. What a hidden little gem this movie is. There's not a lot of other actors besides the two mains so they really have to be able to carry the movie. And in my opinion, boy did they.
One person found this helpful

SHCReviewed in the United States on January 3, 2009
4.0 out of 5 stars
WONDERFUL adult fable that lingers on long afterwards...
Verified purchase
I'll spare you repetition of what others have already said about this lovely little film.

Yes, there is one particularly mishandled camera shot. Yes, it's an independent film made on a relatively low budget. Yes, it's theme of love and hope persevering through the difficulties of illness and other obstacles has been portrayed in countless made-for-tv films that we've all seen a million times on the Hallmark Channel (and/or Lifetime, Oxygen, etc.). But THIS one is different - VERY different.

Jaime Ray Newman's looks are as beautiful as is her acting ability, and in this film she's simply a sheer joy to watch. Although Sean Maher is equally good looking and has great acting skill, he may slightly over-act in his portrayal of lead character Jack Whilton - he occasionally reminds me of Jim Carey when he does - for all practical purposes the ENTIRE cast is exceptionally good, often brilliant. With the exception of that one mishandled shot, the scenes are all very engaging and shot in a way that helps capture and sustain your attention from beginning to end. The music is perfectly suited to the content. And although the ending has an ironic twist, when it comes upon you you will find yourself thinking that you won't be able to say that the film maker didn't warn you (and I'll just leave it at that, so as to not provide you with a "spoiler";-)

Even the PACE of this little movie is VERY good - a RARITY these days, even in BIG-budget films... which is indicative of good directing and producing. Which leads me to writer/director/co-producer Amanda Goodwin:

I always LOVE to see people rise up from the ranks of unknown actors in low-budget B (or even C) movies into the roles of screenwriter, director or producer. It tells me they LOVE movies and the craft of making them. This love is ESSENTIAL to truly fine, emotion-producing films that have a meaningful PURPOSE to their existence. ANYONE can make a technically proficient feature film. But VERY FEW people can make one that allows you to truly suspend your disbelief, believe in and actually CARE FOR if not love the characters and really FEEL for them and the situations that they find themselves in. This movie makes you feel like you want it to last LONGER, because you genuinely want to see MORE of the characters and their relationships with each other. Amanda Goodwin is the person who has accomplished all of this. If you take the time to watch this film and review her past work you will see what I mean.

Living 'Til the End is a fine piece of dramatic film making that creatively and engagingly portrays the extent to which our neurotically-driven "modern mental illnesses" so often get in the way of our finding and hanging on to true love, sometimes to tragic endings. It will linger in your mind long after you have seen it, and it's the kind of movie that you'll want to see more than once in order to explore the characters more deeply - their portrayals are THAT good. If you're looking for a really unique, sweet yet thoughtful and insightful drama about life, death, love and ADULT angst, I HIGHLY recommend THIS one.

PrescottReviewed in the United States on November 29, 2016
5.0 out of 5 stars
To Life
Verified purchase
Slow start, then Paris, then love. Classic battle of real vs imagined and being safe or adventuresome. It's the final moments when we're truly alive. An eccentric love story.

Martin Francis SpielbergReviewed in the United States on May 11, 2016
5.0 out of 5 stars
Watch to the very End Credit!
Verified purchase
I love this film. Watched for a second time. Jaime Ray Newman and Sean Maher are wonderful. Kathleen Rose Perkins is hilarious. Realized, there are more scenes in the credits. So, watch to the very end!
One person found this helpful

WhiskyReviewed in the United States on July 17, 2016
5.0 out of 5 stars
Five Stars
Verified purchase
Grest movie. I could watch it again

S. SmithReviewed in the United States on March 9, 2007
2.0 out of 5 stars
Cringing Til the End
Verified purchase
Living 'til the End is a curiously bad film that has a lot of great actors and a promising plot. Firefly's Sean Maher is Jack Whilton, an estate planner whose mounting neuroses and fears blow up into extreme agoraphobia after a psychic tells him he'll be dead within a year. Jack plans to ride it out, barracading himself in his apartment with stacks of vitamin water and echinacea, when he meets Audrey Gershwin (Jaime Ray Newman), who seems like a projection of Director and Writer Amanda Goodwin right down to the similar-sounding name, a writer who is actually dying and wants to make her last few weeks count. Through Audrey's desire for life and courage in the face of death, Jack slowly begins to unfurl himself into the world again.

The most disappointing aspect about this film is that there are moments of brilliance - Maher and Newman, who in addition to being some of the most beautiful people on the planet, are excellent actors. They sell their characters even when everything from the hideous direction to some of the trite phrases they have to spew are against them. It leaves me with a bitter feeling, because despite myself, I have come to care about these characters somehow when a lot of elements about the film have worked against it, but eventually, even this relationship is skewered by how the events of the story are ultimately handled. The film manages to awkwardly close itself off too much when events need to languish and emotions need to seep through into the atmosphere, and lets itself indulge too much in things like an interesting but badly mishandled camera shot when it needs to be more concerned with fluidity and pacing. It's static when it should move and moves too much and too quickly when it should linger. The film zigs when I want to zag, and if only the pieces could have locked perfectly into place, this film would have been an altogether different experience.

The story has an interesting twist at the end that could have emotionally moved me if I only could have connected more with the characters, if certain aspects of their histories could have been hinted at much earlier (such as Jack's relationship with his father or anything personal and intimate about Audrey at all, which we still don't know by the end of the film) and allowed to hover in the background to add mounting tension instead of being dropped in haphazardly at the end to make absolutely no logical and, more importantly, emotional sense whatsoever.

As for the technical side of things - well, I know that indie films only have so much to work with, but I've known some pretty shoe string budget films that still manage to look fluid and beautiful and not, oh, student film. Unfortunately, Living 'til the End falls under the latter category despite what looks like a large enough budget to incorporate some nice outdoor scenery in New York and Paris. The cinematography and lighting consist of washed out greys and cold blues, lending absolutely zero emotional warmth to what needs to be an emotionally-involved film. The direction is particularly awful because it makes itself obnoxiously noticeable: static boring shots with no dynamism to suddenly and jarringly switching angles in order to incorporate something that looks cool but is unnecessary, editing with no sense of emotion or pacing, and either hollow silence that leaves the film painfully wanting or badly misplaced music that is distracting and grating on the ear.

I admit I only watched this film because I wanted to follow Sean Maher's career, but the man deserves far, far better material, and the same goes for Newman. This film could have been miles beyond what is turned out to be, and that's a damn shame.
8 people found this helpful

Terry FordReviewed in the United States on July 26, 2016
4.0 out of 5 stars
Four Stars
Verified purchase
Well done indie movie.
See all reviews
Back to top
Get to Know Us
Make Money with Us
Amazon Payment Products
Let Us Help You
EnglishChoose a language for shopping. United StatesChoose a country/region for shopping.
© 1996-2021, Amazon.com, Inc. or its affiliates