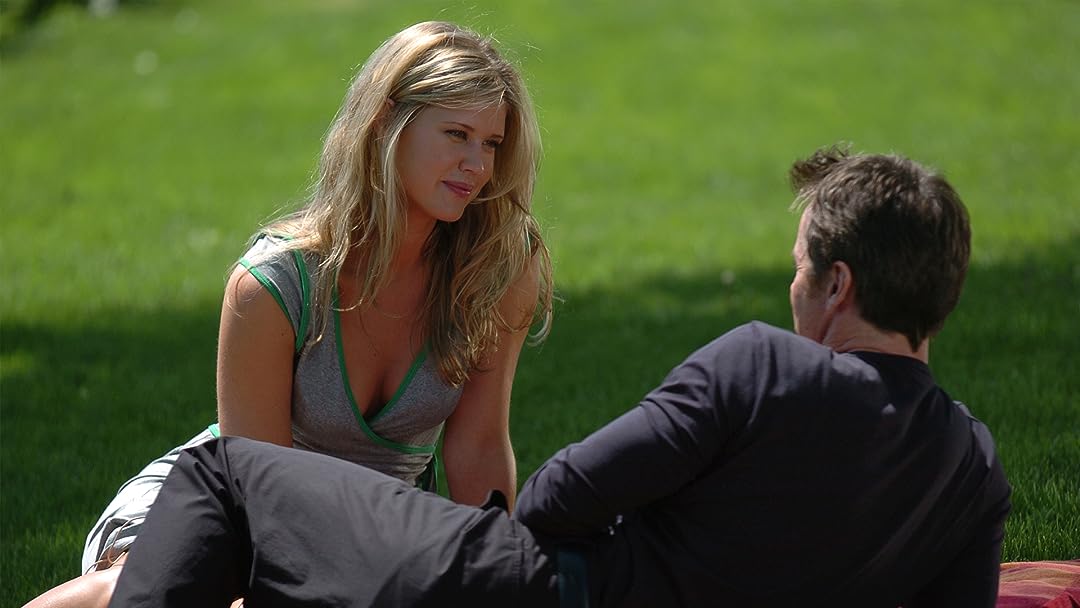 Living with the enemy

(237)
1 h 29 min2005X-Ray16+
Allison (Sarah Lancaster) is quickly swept off her feet by the dashing, loving software billionaire, Phillip. They marry quickly, and her life seems unbelievably perfect. Then, although she doesn't want to, she begins to suspect that Phillip may have been involved in the death of his previous wife. As Allison follows the trail left by her, things become complicated... and dangerous.

Janine K JohnsonReviewed in the United States on October 17, 2018
1.0 out of 5 stars
SPOILER ALERT
Verified purchase
If you believe the FBI would grab a woman off the street, drag her into a van, put a bag over her head, then question her in a parking structure about the death of her husband's former wife (the wife having died long before this woman ever knew her husband) and threaten to charge her with accessory to murder unless she helps the FBI prove her husband was responsible for his former wife's death - well, this is the movie for you! If you find any or all of that pretty darn ridiculous, don't waste your time.
41 people found this helpful

jewel von mayhemReviewed in the United States on January 27, 2019
1.0 out of 5 stars
UGH! not ANOTHER obligatory sex scene!
Verified purchase
WHO'S idea was it to put sex sense in movies??? It's so awkward watching 2 people simulating sex in front of the camera,
Had to jump ahead 2 times, on the 3rd I bailed. Sex has NOTHING to do with the plot!
36 people found this helpful

EighthWonderOfTheWorldReviewed in the United States on December 25, 2020
1.0 out of 5 stars
HOW did this get more than one star? From anyone? Ever?
Verified purchase
Forget the plot (for now) the writing is....what? Juvenile or illiterate is too good for this drivel. Example of many-- near the first of the movie someone is explaining the problem with a certain female saying, "her mother died and she had to go help her so she quit school" (or close) Wait. Mom dies and you have to quit school to go and help her....Help poor mom do what? Die? Get buried? huh? And some of the other things. Who missed the point? I've heard a zillion times, "you'll be under the microscope there with...." and this movie comes up with, "They will look at you through a microscope..." No, it's figure of speech - people don't get a gigantic microscope and look at you through the thing. It's not literal, it's a figure of speech. WHO WROTE THIS and who do they know that something like this escapes into the public? - Then. as has been mentioned before. That plot! What? huh? Girl meets wealthy billionaire who's relatively handsome but can't get dates, save for this one gal, so they marry after the first date? Right. Then, she gets all surprised when, technically on their second date, but first week of marriage things come up and SURPRISE HER about her husband? Please. Please. Oh lord, tell me it ain't true. Somebody thought this was good? It wasn't even funny. I mean, like another viewer commented, I too like to watch stuff that's so bad you can laugh about it, but this was beyond that. It was helpless and hopeless and at best, pathetically sad. I'm sorry to write a review that is so horrible but seriously...IS THIS REAL? Is this some kind of Candid Camera Joke? This really went out into the world to be seen? huh? What?
10 people found this helpful

Kindle SillyReviewed in the United States on August 2, 2021
3.0 out of 5 stars
Modern - but Faster-Moving - Retelling of "Rebecca"
Verified purchase
Poo-poo the bad reviews of this movie. For anybody who has read or seen the de Maurier tale of "Rebecca" more than once, you will instantly recognize the similarities. Young woman adrift in the world meets charming and ravishing man of great wealth, marries him quickly - despite disapproving, condescending, envious b***h of a female employer - and starts to wonder about his past and her choice following a trail of menacing clues seeming to be purposely left in order to drive her up a wall. No, this is not a new premise by any means, but the acting is decent enough, and there is enough mind-messing and subtle body language going on to make one question the motives of any and all characters - even those of the sweet stable-hand, Christina. As in "Rebecca," though the protagonist Allison questions her own sanity, but she seems to be the only character with clear motives. Though beautiful Sarah Lancaster's Allison is doubtlessly unworldly, she is by no means an airhead to be easily led about - despite her ever-loving employer's insistence to the contrary. And anybody who has seen or read "Rebecca" - or any version of "Bluebeard," the original Charles Perrault folktale by which "Rebecca" was inspired - will know well in advance that not one thing or person is what or whom they seem, but everything becomes clear at the very end. The twist at the end is satisfying, but in my opinion, sister, Tanya, gets better than she deserves. Don't discount this movie. No gore or steamy sex, but an interesting enough plot, especially for a literature nerd, and as I've already written, acted more than competently.
5 people found this helpful

Khristine JacksonReviewed in the United States on November 29, 2020
3.0 out of 5 stars
Middle level C-List film..
Verified purchase
Let's be honest in the world of acting there are ten's maybe even hundred's of thousands of actor's trying to make it in show business.. The script wasn't that great..but the cast did their best... It's rather difficult for actor's to make it up to the level of even a B-List.. and even harder for the list,pay scale and publicity tier of a Tom Cruise, Al Pacino Or Keanu Reeves.. The lead actress was pretty..her co-star not to shabby for a Canadian actor..that I have never heard of .? The location was pretty decent..so the production company had some pull ..in order to have a limo,estate and horses for the days,nights while filming. I have no idea where the movie was filmed but ..I watched it in one viewing.. Just remember Brad Pitt and other film stars had to start off some where ..before they made the big leagues in Hollywood..
3 people found this helpful

Tom KingReviewed in the United States on June 3, 2022
5.0 out of 5 stars
Nice grownup movie that comes out with a satisfying ending.
Verified purchase
If you're not a cynical failed actor, writer, or just a plain bitter old crank with a delicate ego, this was a really good movie. I love Sarah Lancaster in everything she's done. My favorite movies are where love wins out in the end. The plot was sufficiently interesting. Loved the lead characters. One of those movies that if you doze off like us seniors tend to do in the evening, you'll load it up again and wind it back to where you drifted off. I loved the ending. Ignore the naysayers. Some people who couldn't write their way out of a paper bag think they could have done better, but you won't find those guys' names on any screenplays. And before you start, mine's on 5 books and a screenplay. I'm just not jealous of anyone else's success. Lovely movie. I'm going to run it again in the morning when my Sweet Baboo wakes up.

Tara TomkoReviewed in the United States on November 13, 2018
1.0 out of 5 stars
Too bad to be funny
Verified purchase
I frequently watch bad movies for the fun of it, but this one was so unfunny, so cringeworthy, and so stupid I just couldn’t laugh. What I do find laughable is the 4.5 star rating this movie has on Amazon Video.

What’s even less believable is the FBI grabbing someone from the street, putting a bag over their head, and telling them they’ll be charged as an accessory to murder if they don’t comply to help them investigate the death of the mediocre-looking CEO’s late wife. Of course, one has to wonder if this would at all be happening if the blonde Chippie hasn’t naively and impulsively tied the knot with a perfect stranger.

Alex CallahanReviewed in the United States on August 22, 2019
1.0 out of 5 stars
"Sleeping with a rich guy--and loving it."
Verified purchase
The promiscuous Allison meets a manipulative industrialist. After catching him in a web of lies, she sleeps with him a lot more, (mostly a lot of his rear end). She makes weird faces into the camera while he appears to be a murderer on top of a control freak. Then, she is shot with a tranquilizer dart while trying to escape their ranch, and he is 'exonerated' by his murderous business partner, who has been murdering everyone from the FBI to impoverished badly dressed techies.
9 people found this helpful
See all reviews
Back to top
Get to Know Us
Make Money with Us
Amazon Payment Products
Let Us Help You
EnglishChoose a language for shopping. United StatesChoose a country/region for shopping.
© 1996-2022, Amazon.com, Inc. or its affiliates