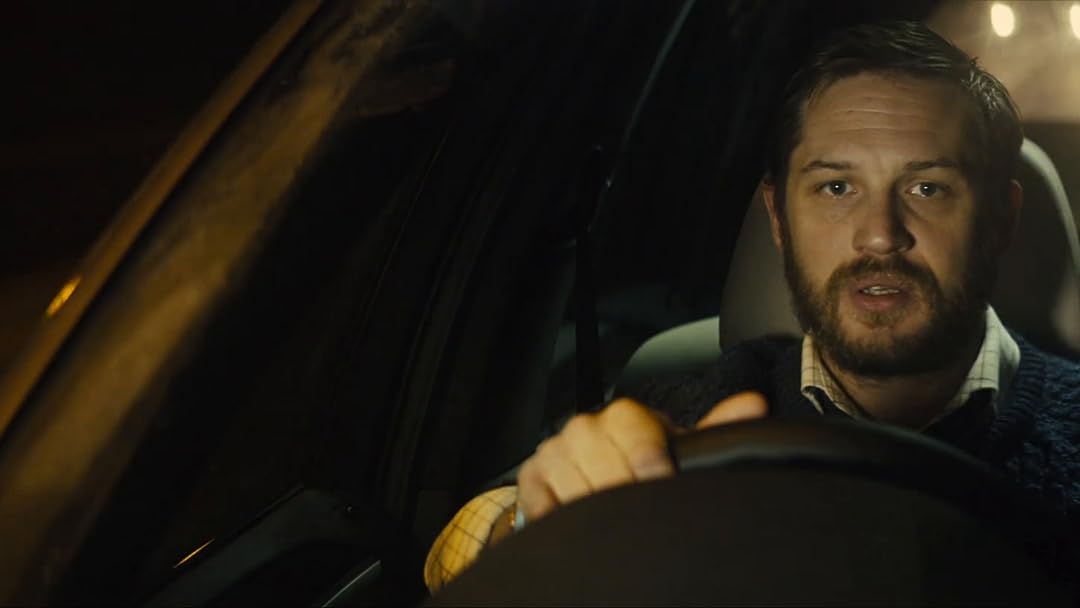 (3,250)
7.11 h 24 min2014X-RayR
On the eve of the biggest challenge of his career, Ivan Locke (Tom Hardy) receives a phone call that sets in motion a series of events that will unravel his family, job, and soul. Directed by Steven Knight (EASTERN PROMISES, DIRTY PRETTY THINGS).

James C SmithReviewed in the United States on May 2, 2019
5.0 out of 5 stars
Highly Exceptional
Verified purchase
Through the course of a 2-hour drive, a man's entire life falls utterly apart, yet in perhaps a more important aspect, that same man finds an internal triumph.

Very few actors can pull off this role, and Tom Hardy nailed it. Him, behind the wheel, making and getting call after call, as he drives to face the fruit of his dark secret. A man, that in order to truly do that which is right, risks throwing away all that he has previously worked to gain.

The voice actors in this film were excellent, too.

This is one of the best "people" movies that I've seen in a long time.

BrianReviewed in the United States on November 20, 2020
1.0 out of 5 stars
Worst show ever!!!!!!!!!
Verified purchase
If you have ever seen Phone Booth and thought that there was very little happening, take out the minimum level of action and adventure and you start getting closer to Locke. This show is based on him driving his car with very obvious repeated scenery moving past. Supposedly he is driving over the speed limit yet every car on the road is passing him like he is standing still. If you are lucky enough to get to the end, the absolute lack of closure should not surprise you. There is no significant plot. He is driving while trying to take care of multiple tasks and getting someone else to help with the most important building construction in his life, all while being fired and driving to see a woman who is having his baby 2 hours away. This film has inspired me to throw out some seed and record the miraculous events as grass grows.
2 people found this helpful

Christina ReynoldsReviewed in the United States on September 6, 2020
4.0 out of 5 stars
Hardy's Performance is Exceptional - Must see!
Verified purchase
*My rating is more of a 3.5 than it is a 4*

Locke is a 2013 British–American drama film written and directed by Steven Knight. The film stars Tom Hardy in the title role, the only character seen on screen, as he carries on a number of speakerphone conversations with characters voiced by Olivia Colman, Ruth Wilson, Andrew Scott, Ben Daniels, Tom Holland, and Bill Milner.

Seeing as how we only view one character on screen in this movie, it's impossible to write this review without making a comment about Tom Hardy's performance. Hardy’s facial expressions and body language over the course of the film is strong and matches the tone of the scenario he is in as it changes. There is no guessing as to how Locke is feeling, as it is literally written all over his face. The subtleties of Locke’s presentation - Like the slight fluctuations of his voice, and the way his eyebrows move while staying specific lines - are more than essential for the success of this film. If you watch this movie for any one reason, Tom Hardy's ability to be engaging over the course of an hour and a half in such a visually unappealing environment is impressive to say the very least.

[SPOILERS START HERE]
Nonetheless, I will say that this movie is tragically predictable; If you're a fan of plot twists and endings you never saw coming, this is simply not the film for you.
“At no point is the audience given any hint that Hardy is struggling with the primary decision being made. I can appreciate having insight and being given an opportunity to see how Hardy comes to terms with how his life has turned out, But given the menagerie of chaos that ensues it just seems odd that at no point does he think ‘would it just be better off if I just turned this car around?’.
[SPOILERS END HERE]

Regardless of my primary criticism I will give this film a pat on the back for being at least one thing - and that's holistically realistic. I imagine given the complexity of Locke’s current situation it might be hard to relate to his character 100%, but the magnitude of the choices he must make are rather commonplace. In addition to this, his innate desire to be his own person and make decisions that defy what some might consider his fate can also be easily appreciated by the audience. This movie feels like a potentially long episode of ‘What Would You Do’ and going in with these expectations Is guaranteed to make this a more pleasant experience.

A good morning dun film if the opportunity presents itself - I would recommend!

GHDReviewed in the United States on April 3, 2015
5.0 out of 5 stars
The Rarest of Things
Verified purchase
Among the best films of 2014, LOCKE is a perfect example of what can be done with great writing, good craftsmanship and a superb actor. It is quite simply, unforgettable. It is also the antidote to an industry that is all too often in the thrall of bloated CGI extravaganzas, blithely destroying American cities and filling our screens with emptiness. This is the simple and powerful story of a man trying to make himself "good." As bland as that may sound to some, it is, in truth, the rarest of things: an edge-of-your-seat film about morality. It is what the art form can do when it is at its best.
28 people found this helpful

Amazon CustomerReviewed in the United States on September 24, 2016
4.0 out of 5 stars
Tom Hardy is probably my new favorite actor. His performance in this movie is outstanding ...
Verified purchase
Tom Hardy is probably my new favorite actor. His performance in this movie is outstanding and really the only reason why to watch this movie. The whole movie is Tom's character Ivan Locke in his car talking to various people on the phone while his life is falling apart. The acting, not only by Tom but by the actors that you only hear their voices of were superb and really draw you in to the story. At first, I was confused, Tom's character is basically on his way to London to be there for a woman is about to give birth to his child after a one night stand. To do this, he pretty much has to make choices that ruins his family and work life. What I was confused by was the magnitude of that decision. I kept wondering, if being there for the birth of his child was really that important. I still don't think it was, but the story and acting and Tom Hardy were still great. The ending was kind of disappointing however, but all in all a good movie. However, if you are upset with it being basically a one man show with one scenery then skip it.
7 people found this helpful

PARKERReviewed in the United States on July 9, 2017
5.0 out of 5 stars
Mesmerizing
Verified purchase
Had me transfixed from the beginning---I rarely even blinked through the entire film. Yeah, yeah, yeah, this film isn't for everyone--if you're looking for heavy action and plentiful scenery changes, you will NOT find it in this movie. BUT THAT'S THE BEAUTY OF IT. This is purely psychological. In one car trip, you see/hear a man's life spiraling as he accepts the consequences of a relational transgression. It's a one-man show---you only get to know other characters via cell phone calls (fascinating, loaded, tense conversations). So Hardy has to carry the whole thing, and carry it he does. This is one of the best performances I've ever seen.
8 people found this helpful

AAReviewed in the United States on October 24, 2016
4.0 out of 5 stars
You Have to Think, If You Just Want Visual Entertainment Keep Driving
Verified purchase
There is no soliloquy here because of the verbal interaction of the character Ivan Locke with the multiple relationships he has in his life. Vast changes occur very quickly because of 1 decision he is committed to. Visually he is the only character in this film we actually see. In spite of that, the emotional and realistic situations of life entwined in these relationships become very clear. This is not a film you are going to expect because of the way it is presented. Ivan Locke gave a solid performance and if you are patient, just as you keep asking yourself if you are ever going to see another character, you will realize you are not, and that you actually do not need to. For me, that is what tipped it from 3 to 4 stars.

Yes, as Margo said the other reviews already spoil it by telling you the story. I hate that about reviews. I don't think the point of reviews is to tell the entire story - hint hint people.

For those that commented on the technical aspects of the film thank you. That information gave me more appreciation after viewing it (and I did not read any reviews before seeing it). the problem is when you watch this film without knowing all that it does become clear to me that there are going to be a lot of people that do not like this film because the average movie watcher is not looking for this type of presentation. Even I went back and forth between 3 stars,(it being okay) and 4 stars (I like it). As I already stated it earned 4 stars because the film gives you everything you need to understand the story, 1 decision and 1 consistent visual actually adds to the reality that how many things changed or were affected by that 1 decision he chose to be committed to.
4 people found this helpful
See all reviews
Back to top
Get to Know Us
Make Money with Us
Amazon Payment Products
Let Us Help You
EnglishChoose a language for shopping. United StatesChoose a country/region for shopping.
© 1996-2021, Amazon.com, Inc. or its affiliates