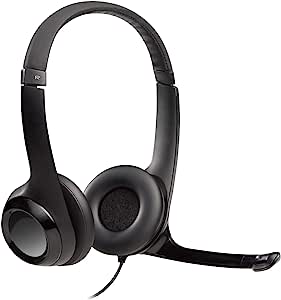 Visit the Logitech Store
4.4 out of 5 stars 19,986 ratings
| 810 answered questions
Available from these sellers.

This product is available as Renewed.

You’ll be comfortable with this headset thanks to the plush ear pads and padded headband that adjusts to you. The noise-canceling microphone cuts background noise-and rotates out of the way when you’re not using it. You’ve got it easy-this plug-and-play USB headset gives you quick access to volume and mute controls. Input impedance - 32 ohms.

4.4 out of 5 stars
4.4 out of 5
19,986 global ratings
How are ratings calculated?
To calculate the overall star rating and percentage breakdown by star, we don’t use a simple average. Instead, our system considers things like how recent a review is and if the reviewer bought the item on Amazon. It also analyzes reviews to verify trustworthiness.

-
I bought two sets of headphones and would like to share my experience with the prospective buyers.

When I got my first unit, I was very happy. Speakers are nice with decent sound, Headphone cushions are great. Best thing is its lightweight, so you can wear for a long time. In only a few days I noticed my headband got loose. Then I find a fine crack in the plastic. I also have another problem of cable that easily tangles.

Update: I thought it may be my fault. So I ordered the second one. I am not a gamer. I use it with much more care. But the second one also had the same crack on the headband. I am disappointed! Why does Logitech tech not use better plastic? Why the headband is using either bad plastic or too thin structure.

I am still using the headphone but I am not a happy customer.

Update: Sep 25, 2018, It completely broke. I tried to contact Logitech. They did not respond well.
Update: Sep 27, 2018, It stopped working. Customer support team does not exist. Never going to buy any Logitech headphone.

Holly H
5.0 out of 5 stars Best Corded Headset
Reviewed in the United States on November 10, 2018
Style: 1 PackVerified Purchase
I work from a home office and spend half my life in distance meetings. I've tried speaker phones, really expensive bluetooth devices, in-ear headsets, and expensive Bose headsets. Most of these have been trashed or (if really expensive) stored in a box in the closet. But of all of them, this is the only headset I would purchase again - actually I did purchase it again! The sound quality is very good, the over ear design is comfortable and blocks a lot of side noise, the microphone is adjustable and can be raised when you're on mute, or brought down directly in front of your mouth to speak. They are wired and hookup to any USB port on your laptop. These are quite inexpensive and worth every penny. After 2 years of daily use and travel with the cord tightly wrapped, my first set started losing connectivity with the USB port and listeners couldn't hear my voice. I tossed it and bought another headset exactly like it. Of the 27 models I've tried, this one has the best listening and voice quality and is also cheap. It's comfy and takes a lot of abuse in my laptop bag. Highly recommended.
Read more
468 people found this helpful
Helpful
Report abuse

Stephanie
5.0 out of 5 stars Got longer use out of it than I ever expected!
Reviewed in the United States on February 11, 2016
Style: 1 PackVerified Purchase
I've had this headset for almost a year now, and at first I thought that it was a good one just to start with because of its cheaper price range. I got it so I wouldn't have wasted much money if I didn't end up liking my new job that required its use. I teach online classes and this headset is great! Totally compatible with Adobe Classroom, which I use with Google Chrome. I've never had any tech issues on my end with it, that's for sure. The sound cancellation isn't the best, but the headphones are cushiony enough that I have no problem wearing them for loooong stretches of time on my busy teaching days (yes, sometimes for about 8 hours total in a day). They don't make the arms of my glasses dig into the sensitive skin behind my ears, which was one of my biggest concerns initially. The cord is nice and long, so if I have to go get a new pen or something, I can discretely do it without taking my computer down accidentally. The mute button is my lifesaver! Students just think I have a really quiet house because they can't see it's muted through the classroom controls. The button is the only thing that has worn down over the past year, but it's still fully functional. I just have to make sure I feel a little click when I push it and check to make sure the little indicator light is blinking so I know it really is muted before I go ahead and bite into a crunchy snack or take a loud slurp of coffee =P.
Read more
406 people found this helpful
Helpful
Report abuse

Liz Duatin
5.0 out of 5 stars USB type of Headset (Connection)
Reviewed in the United States on November 5, 2018
Style: 1 PackVerified Purchase
I am an ESL teacher and this headset has been suggested to me by teachers who are also using the same. This doesn’t look really fancy. Nothing spectacular when you wear it but that’s what I want. A plain black one! I like that it doesn’t hurt my ears and head with long hours of wearing it. It is padded and adjustable to the size of your head in each both sides. Sound is clear.
This also has a good quality material. The only downside is if you are using a Macbook pro with usb-c plugs like me, you need a dongle since it is a usb and not a usb-c. (Check photos)

Overall, even that the dongle cost me extra, I didn’t had any problem using this device in all my teachings. I can say that I will be sticking with this since it is worth the money. It is useful, reliable and not too expensive.
Read more

Amazon Customer
3.0 out of 5 stars This headset is pretty good.
Reviewed in the United States on June 4, 2017
Style: 1 PackVerified Purchase
This headset is pretty good... for the first couple months. It's lightweight, has decent sound, and decent audio, but after awhile, after barely moderate usage, it begins to fall apart, basically. The first time I bought this, I loved it, it was great, but after about 6 months, the wires near the volume button began to screw up, so the audio could only be heard out of one ear; two ears if you moved the wires into a specific formation. So, I bought another one because I thought the first one was just a fluke, and sure enough, not even 6 months later, the wires began to mess up again, this time, near the base of ear, where the wire connects to it, leading to the exact same problem. BUT I still didn't learn my lesson and bought another one. Same thing basically happened. Really disappointed as this is a decent headset, but it's just so poorly made.

Overall:
-Bought this headset 3 times
-Same problem every time, audio gets messed up because of crappy wiring
-Cheaply made, but decent for a few months
-Buy if you feel like blowing $20 for 6 months of a decent headset
Read more
197 people found this helpful
Helpful
Report abuse

Meadow
1.0 out of 5 stars Microphone component stopped working after just a couple of months :(
Reviewed in the United States on April 29, 2018
Style: 1 PackVerified Purchase
Honestly, I was going to give this 5 stars before today, but then the microphone stopped working! There doesn't appear to be any damage to it at all, but people can't hear me all of a sudden when I'm using it even though I can hear them. I'm very disappointed because before that this had been a total game-changer for me, especially since it was reasonably priced and lightweight. I haven't even had it for more than a couple months or so. :( Guess I'll have to buy a new one from a more expensive brand that had more positive reviews. I was looking forward to giving this one a boost for being so great until this happened, unfortunately.
Read more
99 people found this helpful
Helpful
Report abuse
See all reviews

Paul Brennan
5.0 out of 5 stars Great value product
Reviewed in the United Kingdom on December 7, 2020
Style: 1 PackVerified Purchase
I was advised to purchase a headset/microphone to use for online training programmes. Three brands were recommended to me and having checled out the reviews on Amazon, I decided to buy this one. A very good choice, the item arrived very promptly, was genuinley plug and play, is comfortable to wear, provides great quality sound both in the headphones and through the in built micorphone.

The perfect choice for my requirements.
Read more
Report abuse

P. Wooding
2.0 out of 5 stars Build quality is very poor
Reviewed in the United Kingdom on August 18, 2019
Style: 1 PackVerified Purchase
I can't fault the quality of the sound coming through the headphones or the microphone itself. I use these headset microphones on a daily basis and they work very well with Dragon NaturallySpeaking. However, a few days ago I noticed that one side of the headband where it extends is looking rather dubious and unless I put some tape and lock them in place they are going to break. The build quality of the headband is absolutely appalling and with the benefit of hindsight, I wouldn't have ever bought them if I'd known. These are definitely not worth the £50 I paid.
Read more
One person found this helpful
Report abuse
See all reviews