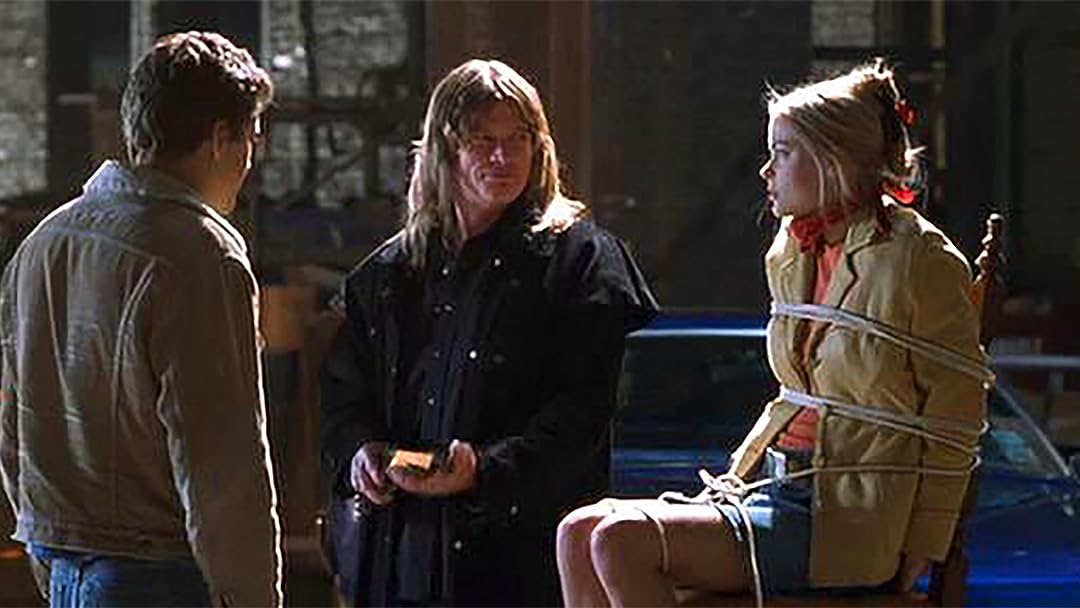 (1,391)
6.11 h 28 min2002X-RayPG-13
Earl's engaged to his step-sister Baby. Baby has entrusted him to take care of her misfit cousin Junior. Baby is also intent on leaving Texas for LA on Tuesday. When Junior and his recently released ex-con friend Tinker rob a pizza delivery boy and end up with $20,000 of drug money Earl is forced onto the scene, giving up his and Baby's LA money to save Juniors limbs.

Amaz DReviewed in the United States on August 6, 2021
1.0 out of 5 stars
Boringggggg and slowww...terrible accents
Verified purchase
This movie just flat out sucks. lol. Accents are not what people sound like in Texas. The plot never got going. Jackson's acting...he seemed comatose the whole film. The crazy dude did a good job as did the skinny dude. But their writing just dragged on. Like the screenwriter realized he had written a funny part and rather than leave on top...wore out his welcome with too much dialogue....a trait of a novice screenwriter.
3 people found this helpful

MaryReviewed in the United States on January 9, 2022
2.0 out of 5 stars
Aweful Flick * Overrated Reviews
Verified purchase
I can't believe this movie got so many good reviews. It was slow, not that funny, bad TX accents, and. . . stupid. Like the actors they chose to play the parts, but. . . not a good plot. The plot was generic and idiotic. Needs humor. The only character who did a good job was the gay guy. All the others were slacking. I didn't finish the flick. Didn't want to waste my time. I got about 3/4 of the way into the movie, expecting it to get better, but it got worse so I stopped. Geesh.

I read another poster's review that they think their IQ dropped a couple of points after watching this movie. Well, I get what he is saying, and my brain feels like a chard roasted marshmallow, eyes crossing and rolling at the same time. It will give you mushy brain.

Lanita MaeReviewed in the United States on July 1, 2017
5.0 out of 5 stars
If stupidity makes you laugh... GET THIS
Verified purchase
This movie had me laughing from start to finish. It has fast become on of my families favorites.... cause I aint stupid. You can tell when my family has set down and watched this again as the quips from the film are flying!
I can honestly say it will have you laughing in the first 5 minutes of the movie. If your in need of a good laugh... take a chance and get this. It wasn't highly marketed so I didn't even know about it till a friend recommended it to me. My family has loved it and to be honest... I prob need to order a second copy in case something happens to the first.
11 people found this helpful

Amazon CustomerReviewed in the United States on November 18, 2020
4.0 out of 5 stars
a good time
Verified purchase
admittedly, the plot is a bit thin, but what it lacks in a coherent story line, it more than makes up for with amusing characters. junior is particularly funny in nearly every scene. there is also the comical idea that a boy and girl who were dating, had their parents marry, so now they are step brother and sister. film is full of fun, amusing characters in odd situations.
2 people found this helpful

Sam MartinezReviewed in the United States on January 13, 2022
5.0 out of 5 stars
A Texas "Dukes of Hazzard" Comedy
Verified purchase
This Texas adventure does not come to the comedic level of "Porky's" or even "Porky's 2"; is not as dark and dire as "No Country for Old Men" or as dramatic as "The Last Picture Show". It's more like the "Dukes of Hazzard". If you are looking for a sophisticated drama with guns, drugs, wild sex - this ain't it. It is a comedy with the storylines almost overlooking the carnage toward the end. Some far-fetched characters - Joshua Jackson caught in the middle of looking after, everybody. Ryan Hurst is a hoot as a small-time hood. DJ Quails as his less-than-stellar sidekick and Jaime King as the strong-willed girlfriend determined to go to LA to be a star on the soaps. It's light-hearted and far-fetched - but hey it's a fun show.

Excited to be hereReviewed in the United States on January 16, 2022
1.0 out of 5 stars
Wow
Verified purchase
Where did all the good reviews come from ! ? This movie is one of the most poorly written movies I have ever seen. So lame. I just dropped a few points off my IQ just from watching it. Wow.
2 people found this helpful

VerityReviewed in the United States on May 17, 2021
5.0 out of 5 stars
Laugh myself sick every time!
Verified purchase
Easily one of the most hilarious movies I've ever seen! I've watched it so many times and still have to wipe tears of laughter from my eyes and my ribs hurt from laughing so hard. I love this movie!
2 people found this helpful

S. R. C.Reviewed in the United States on March 21, 2011
4.0 out of 5 stars
Just a Lot of Fun
Verified purchase
This is a simple "good ol' boy movie and even if you aren't really into this type of movie you should watch it anyway...just for the fun of it. It's a no-brainer and when you finish watching, I can promise you won't have any philosophical questions haunting you or be afraid of being home alone. :) The cast does an excellent job and THEY ARE the characters they play...very believable.

Earl (Joshua Jackson) and Baby (Jamie King), are engaged and live in their parents house. They are step-brother and sister and Earl gets really annoyed when anyone calls her his sister, especially when he is kissing her. :)

The story takes place in a small town in Texas and begins with Tinker (an ex-con) and Junior (a rather stupid cousin to Baby, Earl's girlfriend) robbing a pizza delivery guy. They unwittingly strike it rich when they find the black tote contains $20,000 and 3 large bags of cocaine.

Tinker makes arrangements to sell the stuff to Juan Vasquez and his boys. But before he can finalize the deal Junior grudgingly tells Earl (while embraced in a headlock) what he and Tinker have done.

Earl and Junior go to Tinkers house, where Earl takes the bag of 'stuff', then proceeds to hide it at the bowling alley until the real "owners" come for it (basically to protect Junior, who he can't stand but looks out for because he is under orders from Baby.)

Tinker already has it in for Earl because he botched a get-away after holding up a liquor store, so he goes to Earl's house to try get info about the hiding place. Earl tells him nothing, that is, until Baby comes around a corner which gives Tinker the leverage he needs to get his 'stuff' back! After getting his 'stuff' Tinker stops the truck and shoots Earl (not fatally). Baby backs the truck over him and takes Earl to the animal doctor. :)

Juan Vasquez threatens Junior and wants the stuff, so Junior and Earl go to give it back (not knowing that these gentlemen are not the true owners). There is a shortage in the money, so long story short Junior loses his "pinkie" finger.

Junior shows up at Earl's house all beat up and says the real owners want THEIR 'stuff'. So Earl, Jimbo (Earl's homosexual best friend), Junior, and Tinker go to Juan's house with heavy artillery to get the 'stuff' which they take to a rich guy (the real owner) in a huge ranch house. While there Earl get's a phone call that Juan has kidnapped Baby and he wants the 'stuff'!!!! So they head back to the wearhouse, but so does the rich guy. A big gunfight ensues, baby is rescued, and the bad guys are either killed or injured!

On the way back to the car, after the gunfight, Junior accidentally shoots Earl in the leg. Tinker, in damaged condition from being backed over by the truck, is on the ground after threatening Earl for umpteenth time. They leave him with the 3 bags of cocaine. :)

Earl and Baby split the money with friends and family and literally head into the sunset to their new life in Los Angeles. :)

My pick for the most amusing scenes: When Tinker and Junior are planning the pizza guy robbery and they wear Maxi Pads for masks and when Tinker is trying to get Earl to tell him where the 'stuff' is. :) :) :)