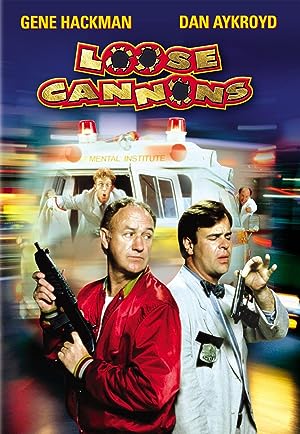 Salvador GlenwoodReviewed in the United States on September 27, 2019
3.0 out of 5 stars
this is a movie.
Verified purchase
What if I told you, Gene Hackman and Dan Aykroyd were in a buddy cop movie together? What if I threw in the names, Dom Deluise and Nancy Travis? Still not interested? That's ok, no one else seemed to be either. That being said, I find this motion picture entertaining, if entertaining meant something less than the word entertaining. This could be a masterpiece.
Hackman has a cat named, Camus, and they live together in existential despair, inside a Woodie. There's something about the absurdity of Dan Aykroyd running around a crime scene like a caffeinated child, sound effects and all; that warms my heart. I bet the script had no rewrites. Production wrapped on time and under budget. The press was generally indifferent, cynical, and too reliant on quality. This movie exists as something else, but not a movie. It's a dream, really. I highly recommend it (Skyscraper high, average mega-city sized building).
2 people found this helpful

AnneReviewed in the United States on August 17, 2022
5.0 out of 5 stars
Disc Works Well
Verified purchase
If you like Doctor Detroit but wish there was less beautiful women and more older men with pet cats, I have excellent news for you! This movie is perfect!

Aykroyd's character is a sweetie, his partner is a grizzled, jaded man. They make it work. The cat is adorable.

The plot is kind of whacky, but not anymore than any of Aykroyd's other films. Good cast, okay plot, and a chase scene you'll never, ever forget. It'll live rent free in your head. Really.

I'm not mad I saw it, and you probably won't be, either.

David E. BaldwinReviewed in the United States on April 17, 2011
4.0 out of 5 stars
Good Movie-Terrible Ad Campaign
Verified purchase
I passed on this one when it was in the theatres because of the terrible marketing campaign for it. They emphasized all the worst aspects of the film and packaged it in one clip i.e. Dan Aykroyd's character going bonkers. The critics and audiences alike must have agreed because they dropped this one like a bad penny. Time has been kind to "Loose Cannons" either because you can watch it divorced from it's awful promotion or the world has been made safe for mentally challenged detectives thanks to Adrian Monk. The film's central plot is so so but the characterizations are just great. Dan Aykroyd gives a bravura performance as a schizophrenic criminologist. Aykroyd gives real nuance to his work here going out on a tightrope but never quite going over the edge. I detected real sensitivity in his handling of this tricky role and that's not easy to do. Gene Hackman does what he does best and that's be Gene Hackman. There's a real rapport between he and Aykroyd's character that's palpable. My favorite scene in the movie is one where Hackman sleeps over at Aykroyd's sanitized apartment in a separate room. The look on Hackman's face as Aykroyd has night terrors is priceless. Aside from the principals Dom DeLuise gives a nice turn as a likable porn king and Nancy Travis(Nancy Travis!!!!) is on hand for the eye candy. Not a classic but not the turkey it was dismissed as in it's day.
3 people found this helpful

Hector GonzalezReviewed in the United States on June 25, 2021
5.0 out of 5 stars
Comedy is a combination of two
Verified purchase
If you were to sum all comedies that been around including the classic these two should be included,

CallahanReviewed in the United States on February 10, 2021
2.0 out of 5 stars
Loose Cannons has it's moments...
Verified purchase
I don't know what to say on this one mean gene.

hartfelt9413Reviewed in the United States on April 4, 2015
5.0 out of 5 stars
Great movie...really funny, too.
Verified purchase
I'd been looking for this movie at local stores, but they no longer carried it. We like action movies and it's even better that it's got so much comedy in it, too. Yes, it's old and we'd seen it already, of course, but it's so hard to find a really good movie anymore. I'm glad we found it on Amazon.
One person found this helpful

S. WilkinsReviewed in the United States on January 4, 2007
5.0 out of 5 stars
Hackman and Akroyd are both just great here...
Verified purchase
I don't know if this film actually deserves five stars, but as for me, I think it does purely for comedic value. Akroyd shows that he was definitely the "pre-Jim Carrey." Hackman has always had a knack for comedy, and certainly does not disappoint. Together, they are totally crazy and, with the addition of Dom DeLouise (hope I spelled that right) makes this an excellent combination of suspense and comedy. Well worth the price!
5 people found this helpful
See all reviews
Back to top
Get to Know Us
Make Money with Us
Amazon Payment Products
Let Us Help You
EnglishChoose a language for shopping. United StatesChoose a country/region for shopping.
© 1996-2022, Amazon.com, Inc. or its affiliates