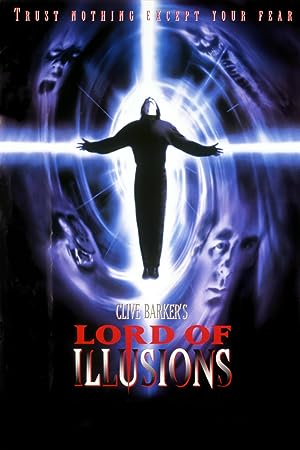 (472)
6.11 h 48 min1995R
Scott Bakula stars as a detective who gets more than he bargained for in this shocking supernatural thriller that rips apart the boundaries between the art of illusion and the terrifying forces of magic. In HD.

free_laborReviewed in the United States on September 4, 2017
5.0 out of 5 stars
only watch the extended director's cut
Verified purchase
I've been looking for a DVD of this for awhile (I have a Mac which can't play blu rays easily), but I finally broke down and bought the blu ray, because the theatrical release of this film is TERRIBLE. The studio forced Barker to edit out 20-30 minutes of his film for the theatrical release, which subsequently MAKES NO SENSE. They cut most of the beginning of the film, which has some of the best scenes and establishes who Nix is and what he can do. The director's cut still isn't as good as Hellraiser, but is much closer to the quality of those films and has some good moments. The acting not so great, Bakula doesn’t really play a noir detective very well, and he (how?) has no chemistry with Janssen. But von Bargen has some really great lines: “How would you like… to see the world, the way it really is… do you want to see flesh, with a god’s eyes?” (trust me, he doesn't) and “But I’m on my own. We’re… all on our own. The grave is lonely… living is worse.” Some of the special effects now don't hold up well, but it's worth watching for von Bargen's performance as Nix.
16 people found this helpful

BrianReviewed in the United States on March 31, 2019
4.0 out of 5 stars
I'll show you real magic...
Verified purchase
Based on the novella The Last Illusion by Clive Barker, (who writes and directs) Lord of Illusions follows detective Harry D'Amour (Scott Bakula), as he looks into the death of stage illusionist Swann (Kevin J. O'Conner). His investigations lead him to uncover a cult lead by Nix (Daniel von Bargen) who claims to be able to do real magic.
Although a bit more conventional than his Hellraiser or Nightbreed, Barker's Lord of Illusions still manages to be an entertaining tale with it's share of scares, the primary one being Nix and his creepy band of followers. There's a Charles Manson quality to the group, weird, but not too weird, living in an abandoned place in the Mojave Desert covered with strange drawings and sculpture (many of which look like they were done by Barker himself). Bakula works as D'Amour, though could perhaps have been a bit more rough around the edges or at least sport a few more protective tattoos. The film also stars Famke Janssen as Dorthea, Swann's wife who hires D'Amour.
If I had any problems with Lord of Illusions, it's that it pretty much spills it's story right from the start. We are shown Swann and Dorthea's involvement with the cult, and what they end up doing. Harry's investigation ends up being a bit anti-climatic because of this and the film might have worked better unveiling the past latter on in the story.
Still worth a view as a horror / thriller, and fans of Barker will certainly like.

Jacksoncaligula94Reviewed in the United States on January 14, 2019
4.0 out of 5 stars
Fun(And a Little Too Talky) Occult Thriller
Verified purchase
When I was young aspiring Cinephile I always had a mild interest in seeing this but at the time I didnt have any means of finding it so i sort of gave up trying to watch it until i heard it was released by Scream Factory.The most surprising thing about this is that how normal it is even if theres all these crazy special effects going on.The Casting of Scott Bakula in this was interesting since he mainly worked in TV so he brings a nice grounded touch to the material.I love the blending of early CGI and practical effects,and if you think some of it looks hokey keep in mind the film is 20 plus years old.The Directors cut of this is 11 or 12 minutes longer I forgot,and I assume it's more exposition which is okay because the film kept moving. Its not necessarily scary but more of a light and effects show sprinkled with the occasional blood and gore,but even when those scenes hit they aren't as explicit as expected.The movie keeps a good balance of pulpy noir dialogue,occult antics,and short bursts of action packed into 2 hours. When it comes to the running time people will complain that a horror film shouldn't be this long but I give it a pass because it's a blend of two genres.If you are interested in this late night cable mainstay or just a fan of Clive Barker I recommend it
3 people found this helpful

DeputyReviewed in the United States on June 3, 2015
5.0 out of 5 stars
Blu-ray looks great!
Verified purchase
I already have the DVD Director's Cut, so the content was no surprise to me. I am a major fan of this movie, so I wanted to see if there was any improvement in the picture with Blu-ray. I can happily report that there IS a major improvement through the great majority of the movie. The only part that doesn't look any different from DVD is the opening with the credits. There is a tiny bit of speckling on the print that is still visible with Blu-ray. But as soon as you move forward to Harry in his apartment, the picture makes a major improvement. And all through the rest of the movie the clarity and colors look spectacular, When you see the construction guy climbing out of the hole he is working in when Harry is visiting the mental hospital, you can actually count the blades of grass on the ground!!! It's that sharp in detail. Audio is also quite good. There are two possibilities with the slight film flaws in the beginning of the film. Either this was the best print they could find for the beginning of the film, or it was done intentionally to give the appearance of it being earlier in time. I haven't watched the movie yet with any commentary, so I don't know if Mr. Barker mentions it. All in all I would say the Blu-ray is definitely worth getting. The Director's Cut is the ONLY way to watch this movie. I find it interesting that cable channels are still airing this movie in the theatrical version, but in HD. Whatever they are showing doesn't come close to the picture on Blu-ray. I still watch it on cable, but more as an avid fan and tradition than anything else.
11 people found this helpful

Fred AdelmanReviewed in the United States on December 17, 2014
4.0 out of 5 stars
Clive Barker and magic. What's not to like?
Verified purchase
Although this film has somewhat of a checkered history, nothing but good things can be said about Scream Factory's presentation of this very good (but not great) horror film. There are two Blu-Rays in this set: The first one is the R-Rated theatrical version and the second disc is of the Unrated director's cut, which contains 12 minutes of restored footage and fleshes-out the story, as well as re-inserting the gore that had to be excised to get an R-Rating. This is the version that you probably would prefer to watch, since some of the holes left in the theatrical version are now patched. This was Clive Barker's last stab at directing (so far), but I always liked the way he presented his characters and Daniel Von Bargen is simply terrifying as the revived leader of a Manson-like cult who actually has supernatural magic powers. I do think Scott Bakula was miscast in his role as the private eye who investigates a case of a magician killed by his own magic trick, but that is just a minor qualm in a rather good film with many surprising moments. Besides some cheesy CGI (which is thankfully kept to a minimum), most of the effects are practical and bloody. Not for all tastes, but a great presentation of a very good film.
10 people found this helpful

Samuel MillsReviewed in the United States on September 10, 2018
4.0 out of 5 stars
Better with age
Verified purchase
When I first saw this film over 23 years ago, I like it in spite of some of its uglier elements. But time has been more than kind. The brutal elements are still there, but what really shines is the humanity of our characters and the brilliant interactions between them. This is certainly a story driven by personal motivations as well as a desire to find normalcy in a world where the supernatural is terrifyingly real.
3 people found this helpful

Harry GeorgatosReviewed in the United States on December 14, 2011
3.0 out of 5 stars
the ressurrection
Verified purchase
LORDS OF ILLUSIONS is a hybrid between a film-noir private detective genre and the horror/supernatural. It deals with a psuedo-religious cult in the desert of California with a false prophet. The film becomes character-driven story as we follow private detective Harry digging deeper and deeper into a world of Las Vegas type illusionists where the line between magic and divintity is blurred. We even get a real-life ressurrection within the cult. The film has disturbing and distressing imagery. CLIVE BARKER understands the iconography of horror better then mosts other would-be horror filmmakers. This film is definitely not an advertisement for end-of-the-world cults and it's madmen thinking they've become God. One would have their mental health questioned if joining similar cults after seeing this disturbing film. LORDS OF ILLUSIONS and NIGHTBREED are the last of the great horror films to come out of Hollywood. Todays horror are all gross visual effects with nothing left to the dark side of the imagination. LORDS OF ILLUSIONS is a good companion piece to Alan Parkers masterpiece ANGEL HEART which is also a hybrid of the noir-private detective genre with horror.
3 people found this helpful

Z600UserReviewed in the United States on July 26, 2017
4.0 out of 5 stars
For Horror Enthusiasts
Verified purchase
I've seen this movie several times and plan to see it again. It is about a PI who investigates some murders and finds an illusionist who is actually using supernatural power in his shows, further finding a sorcerer who becomes a supernatural monster that taps into hell and tries to bring it into the real world. Not for the superstitious or faint hearted. The quality of the video is definitely better on this BD.
2 people found this helpful
See all reviews
Back to top
Get to Know Us
Make Money with Us
Amazon Payment Products
Let Us Help You
EnglishChoose a language for shopping. United StatesChoose a country/region for shopping.
© 1996-2021, Amazon.com, Inc. or its affiliates