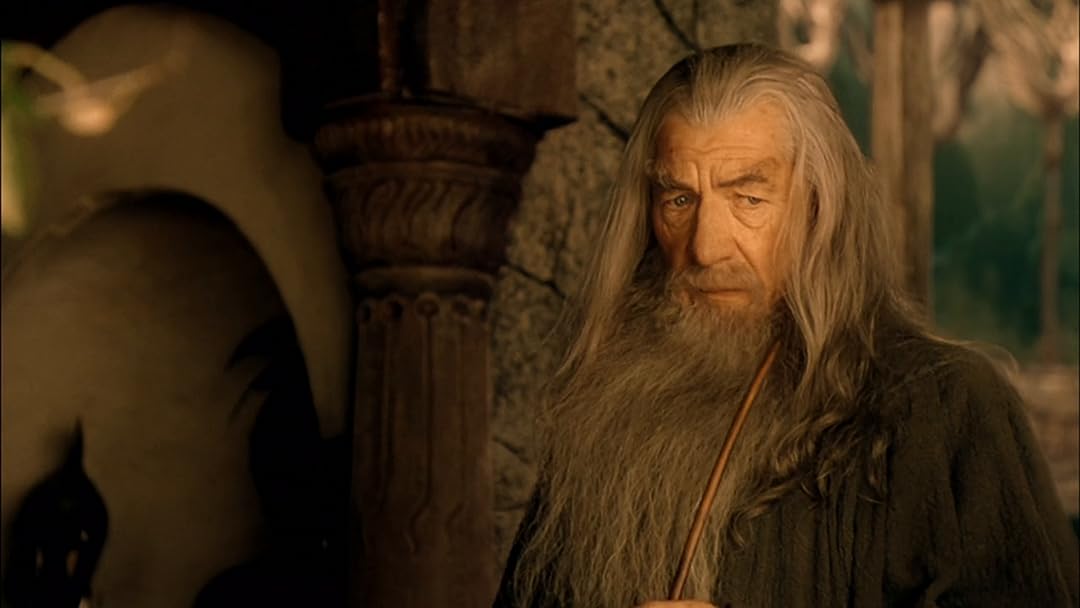 (38,925)
8.82 h 58 min2001X-RayPG-13
In the first part, The Lord of the Rings, a shy young hobbit named Frodo Baggins inherits a simple gold ring that holds the secret to the survival--or enslavement--of the entire world.

Sarah BriReviewed in the United States on April 30, 2019
5.0 out of 5 stars
The extended version is incredibly worth it if you read the books!!
Verified purchase
Wow! I wasn't expecting to be so impressed with the deleted scenes in the extended version of this and the other films of the trilogy.

If you read the books, you will really enjoy the added details that they decided to remove for the film's major release.

These scenes reveal more of the lore and charm that make sense if you know the backstory but wouldn't make sense to the larger audience.

I'm so glad I decided to add the extended versions to my digital library, and only disappointed that it took me so long to realize they might be awesome.

John M. GreenerReviewed in the United States on October 2, 2017
5.0 out of 5 stars
A beautifully movie that the extended version only enhances!
Verified purchase
I have loved both books and movies since I was a small boy. I loved the written word and I loved losing myself in a movie. As I got older, it grew harder and harder to enjoy either, but this movie (and the other two) brought that joy back. What amazed me is how Jackson and Friends (Fran and Phillipa were not given enough credit... if you listen to the commentary, you will find that these two women were instrumental in keeping the movies faithful to the book. Their insight was extraordinary.) mated the two media together in a way that should have satisfied all but the most ardent Tolkien fans. the ones who think it a sin not to incorporate every word into the movies, thereby making them unwatchable. I think that the ghost of Tolkien had to be looking over their shoulders and whispering. What is amazing to me is how many ways it could have failed. The casting was perfect. The cinematography was impeccable. The script, the score, the costumes, the FX, the editing, etc. I cannot praise this movie enough since I think it will be a long time before we see anything like it again. Cate Blanchett's voice opening on the black screen with that beautiful, soulful violin piece can send shivers down my spine. Showing Isildur's fall was more than I could have hoped to see at the beginning (extended cut helps this tremendously). This is a movie that was helped a lot by the extended and added scenes. Many times you may look at the additional scenes from a movie only to find that the editor did the right thing by cutting them out. With FOTR extended, you get a fuller, richer unfolding of a timeless classic. And in the few areas where some things were changed, they worked for me. Giving Arwen's character a more active role as well as replacing Glorfindel's throw away lines was to my mind a stroke of genius. Nearly all of her story is taken from the appendices and so is therefore pretty accurate. And casting Liv Tyler was awesome. She looked like an elf! Another thing that could have ruined the movie was incorporating the languages. But Elvish is beautiful and it was incredible to listen to it spoken. Anyway, if you are not a fan, then my words cannot sway you. If you just watched the movies once and were thinking of them again, I hoped I inspired you to take another, closer look at them.
83 people found this helpful

joel wingReviewed in the United States on August 6, 2020
5.0 out of 5 stars
Peter Jackson really brought Tolkien's words to life
Verified purchase
Each one of the Lord of the Rings films had a theme. For this, the first one it was the toll the quest to destroy the Ring would take upon the Fellowship made up of Frodo, Gandalf, Aragorn, Samwise, Gimli, Pippin, Merry, Legolas, and Boromir. They would lose members and break apart raising the question of whether they could fulfill their task right at the start.

The reason for the Fellowship was the coming evil which so many in Middle Earth, the name for Tolkien’s world, were unaware of. Frodo and his friends gained knowledge of this threat when they run into the Nazgul, the cursed souls of dead human kings who worked for Sauron. There’s a great scene where Frodo, Samwise, Merry and Pippin are hiding from one of them and all kinds of bugs start literally crawling out of the woodwork drawn by the dark presence. It was creepy and did a great job conveying the evil and challenges that the characters would face.

The movie didn’t stick exactly to the book, but it was still an amazing adventure. Besides Sauron and the Nazgul there are Orcs and demons representing evil. There’s magic in the form of the wizards Gandalf and Saruman. There are Elves and Dwarves. There’s betrayal. There’s swordplay. There’s wonder. It’s all a great mix and Peter Jackson really did an outstanding job bringing to life Tolkien’s words into life in this movie.
C
14 people found this helpful

Santa Barbara YannReviewed in the United States on May 20, 2014
5.0 out of 5 stars
Extraordinarily well done
Verified purchase
In our family, some are big fans of Tolkien, some didn't care for the books. This film managed to delight both camps. As for me, I started the movie fully expecting to walk away and find something else to do, because I easily get turned off/bored by action movies and violence. This time, I was glued to the screen for the whole 3 hours. Although there are violent scenes, the editing is so skillful, that I never got to my usual "OK, I get the point. . . move on".

J. MarriottReviewed in the United States on August 26, 2020
5.0 out of 5 stars
The Extended Editions are, in reality, the only editions that count!
Verified purchase
I’ve read LOTR so many times over the course of my life. I even read it aloud to my teen in younger years. It’s iconic literature, not only for the story but for JRRT’s exquisite mastery of language, his invention of language (a feat nearly matched by equally amazing Anthony Burgess), and his not-so subtle politics, which people are still guessing at.

I was devastated by the theatrical release of this movie. It left out so much that made LOTR the saga it truly is. Comes the Extended Editions to the rescue! I bought all 3 of them on DVD, had them borrowed without permission (ahem), bought them again, and lost all my household goods, again without permission. I yelled out loud when I saw they were available at a price my budget could embrace, bought them all that night.

Th EE’S put back in the beauty and the sadnesses of the relationships between various Middle Earth inhabitants, touched upon things in the Silmarillion, and redeemed Peter Jackson. They even included material which was only contained in appendices in the books, expanding on Aragorn and Arwen’s relationship, hobbit history, Gandalf's History with Saruman, etc.

While I would love to have hard copies of these eloquent and wonderous movies, it isn’t feasible in this digital age. Already, DVD is a past tech, computers bite the dust, so I hope Amazon respects those of us who purchase, and that I can share these with my grandchild when that little being is old enough to grasp how incredible a tale is told in these prized possessions.
5 people found this helpful

Amazon CustomerReviewed in the United States on March 1, 2017
5.0 out of 5 stars
AMAZING
Verified purchase
This is one of those rare occasions when I'll say it's okay to watch the movie first. I mean, the book is much better, but the films are incredibly well done, too, and can be a good "gateway drug" for fantasy literature! The one thing I feel that the films do better than the books is the kick-butt women! Arwen and Eowyn are my favorite characters, and they really shine in the films!
29 people found this helpful

Thermos JohnsonReviewed in the United States on December 26, 2020
3.0 out of 5 stars
Looks good, nice to have the extended edit, but the sound is inferior to the physical box set
Verified purchase
We started watching the box set, after not having seen it in years. The disc stopped playing and I noticed that it looked like there was a big bubble on one side of the disc. So, I bought this streaming version to replace it, but right away noticed that the sound lacks the depth of the disc. It emphasizes the upper midrange along with some harsh distortion which makes it a bit grating to the ear. Given the advances in digital technology over the last 19 years, this is a pretty big disappointment. The original was very lush and detailed. This sounds like a lower res mp3.

I am an audio engineer, but even so, good sound matters!
5 people found this helpful

Bryan J. IschoReviewed in the United States on March 23, 2021
1.0 out of 5 stars
Very boring and drawn out movie, with terrible sound
Verified purchase
The sound quality on Amazon is terrible. Voices and dialog were almost inaudible amongst a crash of muddled sound effects and loud booming music. I kept having to turn the volume up to hear muffled, strained dialog and then turn it quickly down when ridiculously loud music came sweeping in.

The movie itself is really boring. The protagonists spend all their time running from enemies whom they can easily destroy when they finally do have to face them, making one wonder why they bother running if they could just save time by killing all the bad guys at the outset. Every scene is drawn out to a ridiculous length. The journey is very disjointed with no coherent flow from scene to scene.

The scenery was nice. That's about the best I can say for this movie.
4 people found this helpful
See all reviews
Back to top
Get to Know Us
Make Money with Us
Amazon Payment Products
Let Us Help You
EnglishChoose a language for shopping. United StatesChoose a country/region for shopping.
© 1996-2022, Amazon.com, Inc. or its affiliates