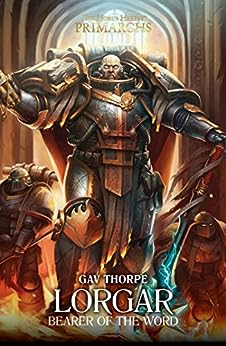 by Gav Thorpe (Author) Format: Kindle Edition
Book 5 of 14: The Horus Heresy Primarchs
See all formats and editions
Sorry, there was a problem loading this page. Try again.

On the world of Colchis, mighty religions rule a decaying society in the name of absent gods – until the arrival of Lorgar. Primarch, prophet, leader of destiny, the Golden One is raised by Kor Phaeron, priest of the Covenant, to be his weapon in a quest for power. As religious war spreads across the planet, spearheaded by the Brotherhood of Lorgar, the primarch is plagued by visions of the future and the coming of the Emperor. To find his place in this new order, he must reach balance between the teachings of his adopted father Kor Phaeron, and the fate that he knows awaits him among the stars.

Read it because
We've seen Lorgar's fall to Chaos and rise as the high priest of Horus's rebellion, but for the first time, the full story of Lorgar's time on Colchis and Kor Phaeron's part in his childhood is told.

Gav Thorpe is the author of the Horus Heresy novels Deliverance Lost, Angels of Caliban and Corax. He is particularly well known for his Dark Angels stories, including the Legacy of Caliban series and the Space Marine Legends novel Azrael. His Warhammer 40,000 repertoire further includes the Path of the Eldar trilogy, The Beast Arises novel The Beast Must Die and the Phoenix Lords novels Asurmen and Jain Zar. For Warhammer, Gav has penned The Sundering trilogy, the End Times novel The Curse of Khaine and the novel Warbeast in the Realmgate Wars series. He lives and works in Nottingham, UK. --This text refers to an out of print or unavailable edition of this title.

4.5 out of 5 stars
4.5 out of 5
150 global ratings
How are ratings calculated?
To calculate the overall star rating and percentage breakdown by star, we don’t use a simple average. Instead, our system considers things like how recent a review is and if the reviewer bought the item on Amazon. It also analyzes reviews to verify trustworthiness.
Top reviews

Shan
2.0 out of 5 stars Keep your expectations low on this one
Reviewed in the United States on June 26, 2018
Verified Purchase
Bearer of the Word is one of the most dull and uneventful 40k books I have ever read. This short novel is about Kor Phaeron and not so much about Lorgar himself. At no point in the story does Lorgar shine through like his brothers do in the same series. At no point did I feel drawn into the story or absorbed by the world building like I did with the other Primarch books and character building is extremely weak throughout.
Try and keep your expectations low and perhaps you will find some enjoyment here.

Cole Egan
4.0 out of 5 stars More informative than exciting
Reviewed in the United States on April 12, 2020
Verified Purchase
Bearer of the word had its ups and downs - more downs, however. The novel focused on Lorgar's upbringing and how he was discovered and raised by Kor Pharaon. I liked the book because it really focused on their lore side of Lorgar and the Word Bearer legion, but someone looking for a more action-packed book will be disappointed.
Read more
One person found this helpful
Helpful
Report abuse

Spencer Owen Mcguire
5.0 out of 5 stars If you don’t like Lorgar as a Primarch read this and see if it changes your mind.
Reviewed in the United States on September 13, 2020
Verified Purchase
All of the Primarchs books have been fantastic. They have a great way of making you relate to even your least favorite Primarchs. This one even made me like Lorgar even though he was my least favorite Primarch at the time.
Read more
One person found this helpful
Helpful
Report abuse

Amazonian
5.0 out of 5 stars Perfect
Reviewed in the United States on June 24, 2020
Verified Purchase
Fantastic. Flawless. While I have absolutely loved every 40k book I've read so far, the Primarchs series has gotten me hooked. Examining the personality traits, abilities, strengths, weaknesses, and idiosyncrasies of each of the unique Primarchs is fantastic, and is facilitated gloriously through these great novels.
Read more
Helpful
Report abuse

JetpackTop Contributor: Star Wars
4.0 out of 5 stars Hits some trigger points
Reviewed in the United States on March 3, 2018
Verified Purchase
This was a hard read for me, not for being bad, but for being too good. As the spouse of someone who was abused, this hits home. I really want someone (anyone) to throttle Kor Phaeron. I would love it if Lorgar "rewarded" him by sending him to be earn whatever Chaos has for his soul.

I'd like to think that Phaeron is right in teh end, that Lorgar was in control all along.
Read more
One person found this helpful
Helpful
Report abuse

pharo
5.0 out of 5 stars It is a short read
Reviewed in the United States on January 4, 2021
Verified Purchase
I love this book I already started to read the book and its cool.
Read more
Helpful
Report abuse

JPS
4.0 out of 5 stars Formative years of a fanatical Primarch
Reviewed in the United Kingdom on January 3, 2018
Verified Purchase
This book is about the formative and early years of Lorgar on largely desert filled planet of Colchis. Also known as Aurelian, he becomes the Bearer of the Word, the Golden One and the supreme religious and political authority on the planet, overthrowing all other powers, before taking command of the Word Bearers. He and they take part in the Great Crusade and being the first to fall to the Powers of Chaos – the Old Faith of Colchis as he sees it – after being rebuffed and rejected by his father the Emperor of Mankind because has worshiped him as a God.

Gav Thorpe has, with this book, done a very good job in characterising Lorgar and showing the evolution of his personality as he discovers his powers and matures. Also good is the related and parallel changes in the relationship over time between Lorgar and the rather infamous and Khor Phaeron with the later starting as the master, then as the protector and surrogate father, then as the right-hand man.

The ways in which Lorgar, initially a defenceless child, is manipulated and put to use in Khor Phaeron’s interests leads to a warping (no pun intended!) of his personality. A related feature of Lorgar’s character is his delusional and mystical sides. He is, at times, naïve, credulous and idealistic. The combination makes him into a dangerous and self-righteous fanatic who – rather desperately - needs to believe in a cause and/or a religion. It also makes him blinkered at times, with a tendency to believe only what he wants to believe and a somewhat selective memory. At times, the flaws of the character appear clearly, including his inability to see Khor Phaeron for what he really is.

A further feature of interest is the rivalry between Khor Phaeron and another of Lorgar’s early companions who genuinely loves him and sees Khor for the manipulative and unscrupulous creature that he is. The opposition between evil and good, self-interest and real generosity, unscrupulousness and loyalty is clearly displayed throughout the book till the end, until one of the two triumphs once and for all.

Ahmed A A
5.0 out of 5 stars More of Lorgar's misgiuded missteps.
Reviewed in the United Kingdom on November 10, 2019
Verified Purchase
Great book. I've read the the First Heretic and this book continues the great tragedy of Lorgar's character. You see just how close he come to being a true hero, only to trust the wrong person. A great addition to the mythos of Lorgar.
Read more
Report abuse

Richard
5.0 out of 5 stars A good read.
Reviewed in the United Kingdom on January 18, 2020
Verified Purchase
An enjoyable book.
Read more
Report abuse

Jimminy Cricket
3.0 out of 5 stars Meh.
Reviewed in Canada on July 13, 2020
Verified Purchase
I was hoping that the book would show us more of Lorgar instead it's more about Kor Pharon which was a let down for considering how good the other book's have been.
Read more
Report abuse
See all reviews