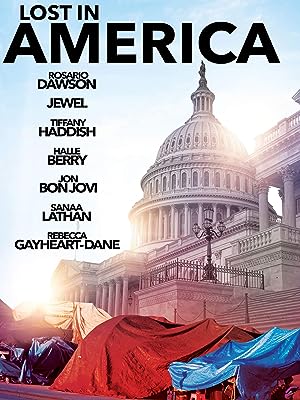 (61)7.51 h 33 min2020NR
The world’s wealthiest country has 4.2 million homeless teenagers. Director Rotimi Rainwater along with the help of celebrities and politicians who have been homeless themselves, take a large scale issue down to a very personal level.

C. CarrollReviewed in the United States on June 14, 2020
5.0 out of 5 stars
Loved it!
Verified purchase
We loved it. My hubby and I were crying. It pains my heart to know that over 4 million youths are homeless in our rich and prosperous country. Until recently the true number of homeless kids was unaccounted for. They are forgotten and looked over, discriminated as drug addicted runways. The truth of why many of these children are homeless is made apparent, by their real life stories. These children are our future and they are lost. Our system has failed them. Please watch this with your family and friends. It’s a poignant and thought provoking film. I am #Lost in America!
One person found this helpful

Amazon CustomerReviewed in the United States on June 13, 2020
5.0 out of 5 stars
eye-opening doesn't even begin to describe this film
Verified purchase
I sat down to watch this expecting to learn something. Ended up with an intense need to take action and sent an application to volunteer at my local homeless shelter immediately. Ignorance is no excuse after watching this
One person found this helpful

xyzReviewed in the United States on May 13, 2017
5.0 out of 5 stars
The Nest Egg
Verified purchase
This is in my category of "too much talking" comedy, along with most of Woody Allen's work. However, if you have ever owned a motorhome, or were thinking of owning one, or "full timing" in any RV, this is a movie to watch.

BrooklynReviewed in the United States on July 31, 2020
5.0 out of 5 stars
This is a reality for more people than we know
Verified purchase
This film absolutely grabbed at my heart

VictoriaReviewed in the United States on August 29, 2021
5.0 out of 5 stars
Lost in America dvd
Verified purchase
Arrived in great shape and in a timely manner.

Darrius McnealReviewed in the United States on June 13, 2020
5.0 out of 5 stars
Must watch
Verified purchase
Lots of information

Harry H LongReviewed in the United States on October 17, 2020
5.0 out of 5 stars
MUST SEE DOCUMENTARY
This is an enlightening documentary but also a very sobering one. It may also be the most difficult film I’ve ever written about. For a long time the estimate of homeless youth was said to be anywhere from 48,000 to 2.8 million. No one knew for sure because there was never any funding for an accurate count (even though there’s grant money to be had to find out things such as what happens to a monkey when you hit it very hard and repeatedly on the head). There was funding in The Leahy-Collins Runaway and Homeless Youth Act of 2015 (yes, Susan Collins once had a soul) but it didn’t pass because language included LGBTQ youth. Finally, in 2017 the University of Chicago undertook the first national count and determined that there are four million teens and young adults on the streets. On. The. Streets. This nation has 5000 shelters for animals (and I’m all in favor of that) but only 400 for kids. Every day 13 of them die, some by their own hands. Most of them fled abusive situations or were kicked out for drug use or because they are queer (40% are LGBTQ). Of those who age out of the foster system almost half become homeless. Homeless youth are at risk of becoming involved in sex trafficking; one third of them will be lured into it within two days of leaving home. The average age of sex victims is 12.
Homelessness used to be almost unknown in the US from the end of the Great Depression to the 1980s. Then President Ronald Reagan, continuing a policy he’d instituted as governor of California, closed mental institutions to shave money from the budget for social programs. The new mantra was Self Determination (basically meaning you have then right to run your own life – even if you’re batshit crazy – so long as you’re not a danger to others or yourself) and the former residents of those institutions ended up on the streets. (Public housing and Section 8 funds were slashed at the same time, going from $32 billion to 7.5 billion.) Reagan pronounced in an interview that most of those who were homeless were in that situation by choice. (He didn’t say whose choice.) The director and interviewer is Rotini Rainwater who himself experienced being homeless as a young man (he set up a screening of his earlier documentary on homelessness for congress; no one from either party showed up – this is obviously a bipartisan nonissue). Experts on the issue and concerned celebrities (Jon Bon Jovi, Halle Berry and Jewel, who also executive produced) are interviewed. But it’s the youngsters who are the real stars here. If you can come away from this film without your heart broken, you don’t have one.
One person found this helpful

EMillerReviewed in the United States on June 9, 2020
5.0 out of 5 stars
These stories need to be heard.
Lost in America starts discussions that we need to have. It offers perspective from young people who need our support. These real stories from runaway and homeless youth need to be heard and action needs to be taken to ensure supportive services are in place. I appreciate the work the agencies involved in this feature are doing, like National Safe Place. We can support them and keep access to safety open to youth on the streets. Great documentary by a phenomenal director with lived experience.
One person found this helpful
See all reviews
Back to top
Get to Know Us
Make Money with Us
Amazon Payment Products
Let Us Help You
EnglishChoose a language for shopping. United StatesChoose a country/region for shopping.
© 1996-2021, Amazon.com, Inc. or its affiliates