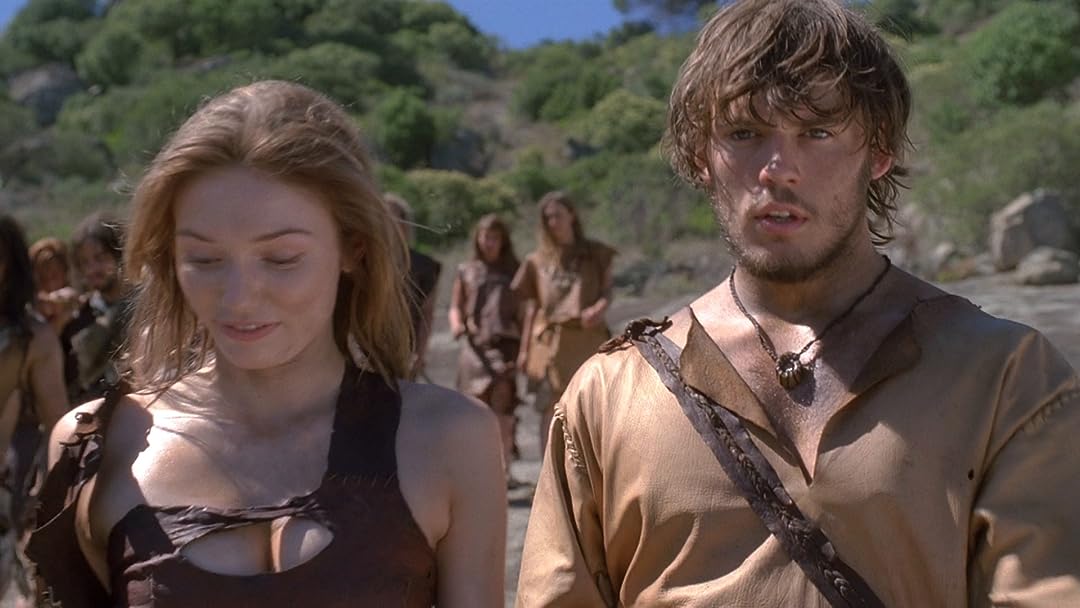 (665)
4.91 h 30 min2010X-Ray13+
An isolated tribe of warriors fights for survival. But when a race of genetically mutated, infectious beasts attacks their small village, Amal, must lead the tribe in battle in order to save the human race.

Russell SReviewed in the United States on February 14, 2017
4.0 out of 5 stars
The stars make this movie
Verified purchase
Well, I was pleasantly surprised. Sean Bean, of course, can do not wrong but his part in this isn't very big. We have a possible future for the human race which includes "beasts" men and women mutated into some king of savage beast (not a far stretch) If they bite, scratch or breathe on you, you will change too. There is a cure though created by the "thinker" of the cave bunch. Sam Claflin. It is up to him and Corey Sevier, the alpha hunter guy and his lady fair to get the cure and bring it back to his people who are trapped in said cave by a bunch of Beasts. If I am making light of it, that is not my intention it is just that I did enjoy the story and the acting is very good too. There are a few slow parts and they are kind of necessary to the story development. As I said this is a good way to spend an afternoon, check it out, you won't hate it.
6 people found this helpful

EinsatzReviewed in the United States on August 16, 2014
3.0 out of 5 stars
"We have water! But we don't have food."
Verified purchase
This is definitely not an original idea; post-apocalyptic storylines have been around forever. In this particular case, all the `supposed' cave-dwellers are just a bit too pristine and GQ in their fancified ragtag garb artfully created by a designer. In record time, we're instantly introduced to one tribe trying to exist on nuts and berries and the occasion stray GIANT sloth. Their greatest enemy is a band of infected people they call the beasts (they're just misunderstood mutants). They are spied on by Amal (Sean Bean), who had some acquaintance with the father of two of the cave-dwellers. The dead man in question just happened to have created the only known cure for the dreaded `beast' disease. At that point in time, the son of said dead guy is the only person on Earth who can still read and therefore recreate the antidote (known as formula yellow powder). Naturally, that calls for a quest to the BIG city. Will they reach the city in time, will they find enough yellow powder left to cure their tribe, will their one and only reader be able to reconstruct his father's formula!!!

The main problem with this tired worn-out sci-fi flick is the overly familiar plot that's rushed to an unsatisfactory conclusion. It feels as though bits and pieces of the story were jettisoned along the way due to time constraints. Characters and plotlines were dragged in at the last minute then never properly dealt with before being abandoned. They definitely tried to accomplish too much given their obvious limitations. Still, it is watchable and entertaining enough and Sean Bean's presence tends to anchor some of the fly away aspects of the story.

WynneReviewed in the United States on May 9, 2015
4.0 out of 5 stars
Nice change of pace of dystopian futures!
Verified purchase
I would love to give it a 5 star - but there were moments that seemed a bit shallow. Sean Bean never disappoints! The actor portraying the learned reader hero of the isolated tribe - was quite good, as well. The rest...meh! good enough for the movie - no real horrible actors except the villain and his daughter. The villain character was in my opinion just pathetic and somewhat laughable. The villain's daughter's character was too ready to give in - I'm glad she was where she was (gives me hope for humanity - so to speak) but for the purposes of believe-ability - I think her part in the plot was so they could reduce the amount of money spent in film making. I would have enjoyed some stretch in the that part of the movie - they could have lengthened the time it took to become turned - in order to achieve more movie plot time in the city. Otherwise, I really enjoyed it immensely - and really thought it was a very good spin of a dystopian future.
2 people found this helpful

L. ErnstzenReviewed in the United States on March 5, 2013
2.0 out of 5 stars
The Lost Future sshould stay lost.
Verified purchase
I love my science fiction, but this fell far short of creating a very interesting movie to watch. The cave scenes were poorly managed and I think some more could have been done with trying to build the story between the "beasts" and those that were trapped in there. The rest of the story moves slowly and just does not come together that well. This amazing elixir and and how it was created seems plausible, but when the son struggles to read a book I found it difficult to build a realistic relationship between how he could be a replacement as the person to help the future.

It was just too far fetched and the movie did nothing to support that theory. Other than that you still wanted to know how the characters developed, but they just left you hanging to much that you could just not get into the movie that much. So if you are a die hard who just does not stop in the middle of the movie then watch and see. That is all I can say about that.

ben franklinReviewed in the United States on September 20, 2017
1.0 out of 5 stars
hunter/gatherers acting like animals who are noisier then hell
Verified purchase
BAADDD... hunter/gatherers acting like animals who are noisier then hell, can not flank their prey? they deserve to eat roots and berries. mutants seemed smarter then the normals. Everyone lacked the basic survival instinct of us monkeys, more of a dumb and dumber movie of the future. And writing this review with movie only 1/2 over...leather hot pants and halter tops too may be stylish but they don't seem smart enough to sew anything. Just no coherency with overall plot. Should change name of movie to preppy college after the end of the world . :(
One person found this helpful

moo cowReviewed in the United States on January 7, 2020
3.0 out of 5 stars
should have been named foliage.
Verified purchase
literally every wide angle far shot scene was behind dense foliage. still worth a rental, it wasnt terrible.
One person found this helpful

Donald L. JonesReviewed in the United States on April 4, 2013
5.0 out of 5 stars
The end of society
Verified purchase
This was a well done movie and a surprise that it has not made more of a splash as a surviavl movie. It takes up several generations after the end of our society. The plot rotates around the implyed end of society that was done in by some type of plague. Society is fragmented and formed into tribes and the ability to read has been lost which seems to be an underlying issue to the whole of the story line. It was an entertaining plot that kept me gussing as to what was going to be the end of the story which is what I like. I was not able to second guess the ending. Which I often do. Good entertainment and worth a watch.
2 people found this helpful

Peter FadenReviewed in the United States on December 7, 2011
3.0 out of 5 stars
Good for a sci-fi channel style movie.
Verified purchase
So, if you watch this movie, you wont walk away thinking that you might ever watch it again. You probably wont. However, for all its many flaws, it was still an okay movie. You probably wont regret the hour and a half, but you also probably wont remember it a month later.
As for the story, the overall premise is actually really cool. A virus caused mutations in the majority of humanity, turning them into mindless killers, and possible cannibals. Not unique by any means. However, the story is set several generations after said apocalypse. Surviving humans have mostly regressed to tribalism and have lost the art of reading and writing among other things.
However, there are plenty of "why did that happen" or "why did they just do that" or "how did they even figure that out" moments. For example, how did somebody in a completely illiterate world manage to figure out how to read or write. Why does somebody who defeated a powerful band of warriors wander off to be killed after a pathetic attempt to kill his killer? How does somebody walking manage to arrive at the same spot as a bunch of people on horseback only a few minutes later? There are plenty of those questions that will forever remain unanswered.
Getting Sean Bean to accept a role in this flick must have been an inspired moment for the director or producer. I cant imagine how they convinced him, but they did. That being said, even his role was uninspired (and he is one of my favorite actors actually).
Anyway, like i say, you probably wont regret watching this film, but you wont remember it for long.
In fact.....ummm...............
3 people found this helpful
See all reviews
Back to top
Get to Know Us
Make Money with Us
Amazon Payment Products
Let Us Help You
EnglishChoose a language for shopping. United StatesChoose a country/region for shopping.
© 1996-2022, Amazon.com, Inc. or its affiliates