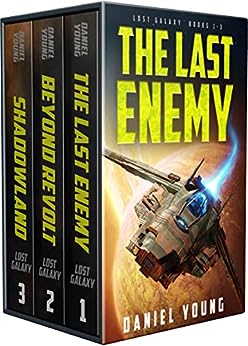 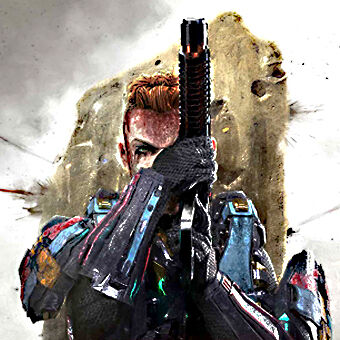 AN INVASION. A CONSPIRACY. ONE SHOT AT REDEMPTION.
Three never-before-published books bundled together!

The Lost Galaxy series follows the adventures of a lone lawman, his aging and possibly insane spaceship, and a trio of mercenaries, new recruits, and hardened criminals who are all swept together behind an alien invasion that could wipe out humanity.

As Provincial Sergeant Jack Bowman and his ragtag group race to save themselves and warn humanity of the invasion force, they learn that there is more at stake than anyone—human or alien—could have guessed.

A conspiracy could bring down everything in the galaxy...

Lost Galaxy (Books 1-3) is old-fashioned space opera at its best, perfect for fans of action-packed drama and fun!

If the top things you look for in your sci-fi are...

...then welcome to your next binge read.

Note: The Lost Galaxy series is an homage to thrilling pulp sci-fi of yesteryear. If you're interested in hard science fiction look elsewhere. But if you're looking for action-packed adventures on strange worlds with even stranger aliens, this series is for you!

Included in the box set:

I grew up on a steady diet of Star Trek and Star Wars. My stories evoke my love for those kinds of space opera tales mixed with a healthy dose of action. I hope you enjoy reading them as much as I do writing them! Join my newsletter, Captain's Log, and get a free book of short stories by visiting BookHip.com/BRQVBF

Mjm
5.0 out of 5 stars Buckle up!
Reviewed in the United States on May 19, 2022
Verified Purchase
Another winner for this outstanding author! Get ready for another wild escapade! This story pulled me in at once and kept me engrossed right through to the last page. I enjoyed the strong characters and vivid descriptions that made me feel I was watching an adventure movie. It has a lot of action, battles against overwhelming odds, and even some laughs along the way. I hated to put it down, even to go to sleep. I’m looking forward to the next installment of this great series.
Read more
One person found this helpful
Helpful
Report abuse

Kindle Customer
5.0 out of 5 stars Adventurous
Reviewed in the United States on May 24, 2022
Verified Purchase
Lost Galaxy books 1-3 is a really good series. Constable Bowman while taking a couple of prisoners to another planet gets caught up in a war between the Pterans and the Republican Guard and must try to survive. Aliens, A.I and lot of bad guys. Great reading.
Read more
One person found this helpful
Helpful
Report abuse

Kindle Customer
5.0 out of 5 stars I loved it
Reviewed in the United States on May 5, 2022
Verified Purchase
What a fun and exciting set of stories. I can't wait to read four five and six. I highly recommend this set of books.
Read more
Helpful
Report abuse

Dougal
3.0 out of 5 stars Liked the characters
Reviewed in the United States on July 27, 2022
Verified Purchase
I liked the characters, but far too much of the books was spent with them running from this place to that place to some other place. And always under sheets and hails and clouds of laser fire. I must say, their adversaries' total lack of accuracy makes Imperial Storm Troopers all look like deadly snipers. There are now new contenders for Worst Shots in The Galaxy!
Read more
Helpful
Report abuse

ChristyTop Contributor: Fantasy Books
5.0 out of 5 stars what a beginning
Reviewed in the United States on April 24, 2022
And he does it again, Another start of an amazing series that I got sucked into and could not put down. It had it all - unique characters, overwhelming odds to beat, survival on the line, and aliens bent on destroying those pesky humans. This is the first three books and what a ride the unlucky people on board the simple transport ship end up on. Made me laugh and groan and entertained me as Bowman and the rest fight to stay alive. And the ending of each book was great. Need more!! Have to see what Bowman must figure out and survive next. I received a copy early and this is my honest review.
Read more
2 people found this helpful
Helpful
Report abuse

Manie Kilian
5.0 out of 5 stars Bad rookie days
Reviewed in the United States on April 25, 2022
When rookie recruit Van Dyke reported to Jack Bowman at the local Novis law office, he did not expect to having going along to check out a report that an alien spaceship has crashed nearby.
Neither did he expect to be subsequently crash land on the deck of an alien destroyer when he was escorting two criminals to court on another planet.
The mayhem and life threatening events that followed must have been indicative of non stop bad rookie days I think.
Perhaps just as well that sergeant Jack Bowman was there to take charge.
Lost Galaxy is quite a gripping and action packed adrenaline fest. It is really with a shock when one gets to the end of the trio of books in this box set and realize you are back in your own skin again.
The best part off all is that another box set is soon going to be on offer to continue this pursuit of justice in action
Read more
Helpful
Report abuse

John Krysa
5.0 out of 5 stars A fantastic series
Reviewed in the United States on April 29, 2022
My mentor told me, when I was in college, if you start reading a book, and it doesn't capture your attention in the first 50 pages, quit reading it and get something else, because life is too short. Well, I can honestly say that I didn't even have to get 10 pages into this book set and I was hooked. It is not all action and adventure, but it gives you that sitting on the edge of the seat feeling, that little tweak in the stomach, as you are reading, that you just don't want to put the book down.
The good news/ bad news is, the next set, 4-6, is only $0.78, but it doesn't come out for a couple months!
(Insert crying face here)
If you are looking for a good read, fun, escapist, weekend read, this is the set for you.
Read more
Helpful
Report abuse

Grady Murray
5.0 out of 5 stars Great sci-fi read
Reviewed in the United States on April 24, 2022
This series has some great characters. They are in a war against aliens our group is captured and escape but find themselves in even more trouble.
Read more
One person found this helpful
Helpful
Report abuse
See all reviews