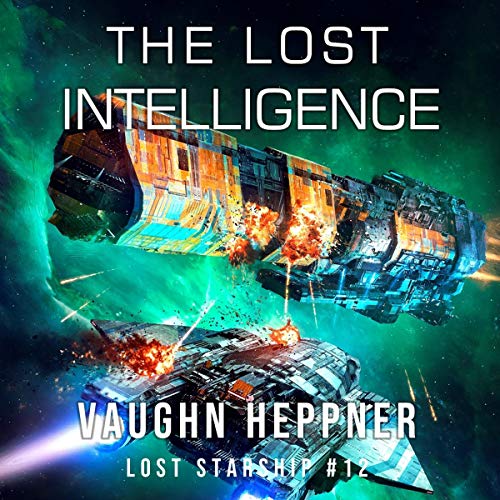 His code name is Nostradamus, and he’s an ancient alien super-intelligence awakened by pesky humans crawling upon his planet. He decides to use these low-grade morons, testing some, making the special ones his agents and sending them into Star Watch to make the military organization his own.

It’s an insidious assault from within, run by a creature with fantastic predictive powers against what he considers an infantile species.

Captain Maddox and the crew of Victory catch a glimpse of the secret menace in the Tau Ceti System. They race back to Earth to report. But Nostradamus’ web is already closing in. It may already be too late.

Except...Maddox, Galyan, Valerie, and Professor Ludendorff refuse to give up on those they love. The secret war against humanity has a new set of champions, hardened veterans willing to challenge an alien that can predict their every move.

Do Maddox and his crew stand a chance against the super-alien and the full weight of Star Watch turned against them? Find out in The Lost Intelligence, the 12th book in the Lost Starship Series.

4.6 out of 5 stars
4.6 out of 5
907 global ratings
How are ratings calculated?
To calculate the overall star rating and percentage breakdown by star, we don’t use a simple average. Instead, our system considers things like how recent a review is and if the reviewer bought the item on Amazon. It also analyzes reviews to verify trustworthiness.
Top reviews

JudyB
3.0 out of 5 stars I think Vaughn lost his editor
Reviewed in the United States on March 25, 2020
Verified Purchase
I have enjoyed this entire saga, from the first book in the series. The editing has always been rough but it never before was a complete distraction from the story. In this book I suffered through so many words autocorrected to the wrong one , grammar slips and errors in tense that it quickly stole from the enjoyment of the story. Plot was good. Too many characters were introduced and then forgotten, adding nothing to the plot. Come on Vaughn, you can do better than this. Good story but you have to see to the details to be great.
Read more
8 people found this helpful
Helpful
Report abuse

fox
2.0 out of 5 stars Probably the worst in the series
Reviewed in the United States on June 25, 2020
Verified Purchase
Still not entirely bad, though. I dont mind that the story completely went off the rails and ignored the multitude of enemies already scattered throughout the galaxy and gave us a new, unrelated villain. It's just that we really never understand the origin, motivation or end goal of the new villain. I never got a clear picture of the "Liss Cyber Machine." Becker was also a fail. I never understood his purpose in the story. He was just a grotesque and inept minion. Nothing he did was believable and his "super brain," while touted as a glorious weapon, seemed to me underwhelming in Becker's use. I didn't care about the villains, the conflict was not sufficiently explained and there was little drama or suspense. Ludendorff suddenly and inexplicably changed personalities as well. Almost as if this book wasn't written by Vaughn or he's just begun phoning the stories in or using a template for writing and running out of interesting characters to plug in. This book is completely unnecessary in the series. Please get back to the established villains and start tying up some of the stories we've been engaged in up to this point. The Erril's were the only interesting part of this book and that part was glossed over and not told well. But, as always, the books are easy to read and move along at a decent pace. I'm this far in so I'll buy the next book but if that one continues on the same downward spiral that will be the last in the series for me.
Read more
5 people found this helpful
Helpful
Report abuse

Mike NemethTop Contributor: Photography
5.0 out of 5 stars Alien machines are not your friends
Reviewed in the United States on October 19, 2021
Verified Purchase
In "The Lost Intelligence," author Vaughn Heppner returns to one of his favorite themes — demonstrating the potential dangers of artificial life. In fact, he's got an entirely separate series of sci-fi novels fixated on that same thing. In Captain Maddox's case, however, the technology angle isn't so overt. There's this character working behind the scenes to thwart the combined influences of humanity's various factions. It's an intelligence that refers to itself as Nostradamus, and it's surprisingly good at influencing people to help it achieve its means. The intelligence comes from ancient technology with Builder roots. Builders are a reportedly extinct race of super-intelligent beings who left behind scraps of technology that often assist rather than detract from the goals of mankind. This Nostradamus evidently awoke as the result of past nefarious dealings that Star Watch and its top agent have had to deal with. Maddox doesn't have much to go on, like usual, other than his gut. When a starship appears without explanation, the captain determines it to be a potential threat and initiates conflict that results in its destruction. Star Watch leadership takes a dim view of the situation, and it causes Maddox and his crew to get on the wrong side of the agency's new administration. What unfolds is classic Heppner, hard-boiled action and mystery. He introduces really reprehensible antagonists that make this one of the more fun in the series. The ending is highly satisfying.
Read more
Helpful
Report abuse

Mose
5.0 out of 5 stars Usual great storytelling by Heppner
Reviewed in the United States on August 26, 2020
Verified Purchase
Enjoyed reading this book as I have all the other books in the series. In fact I had re-read the series before reading the last two books and enjoyed them again. I anticipate rereading these books a few times. They are fast moving books storywise with well-developed characters you care for. Plus, lots of imaginative plots and creatures.
Read more
3 people found this helpful
Helpful
Report abuse

John Kerich
3.0 out of 5 stars This book May reading
Reviewed in the United States on April 19, 2020
Verified Purchase
In this installment of the book we have the first of the new set of villains to fight. The writing was good but the plot development was thin. What disturbs me most was star watch and how easily it was taken over. Basically it was turned into a Nazi organization within a matter of a year and Parliament did nothing. There is something seriously wrong with star watch and the concentration of power at the man of the top. But then the the load high admiral took over the entire Commonwealth as a dictator, so maybe this is more like a Rome rather than a true functioning democracy. Oh, they also had her own little Gestapo unit running before this story starts as well. So maybe it does make sense that it could be turned into full Nazi army so easily.
Read more
One person found this helpful
Helpful
Report abuse

kelly
5.0 out of 5 stars Easy way to speed read
Reviewed in the United States on May 11, 2021
Verified Purchase
Another great book in this series.Now I'll teach you how to speed read this books and most likely the rest.. Those of us who have gotten this far know all the characters history and what happened in past books. The author attempts to not only book his books interesting which they are to extreme but ALSO be attempts to m as me each book a stand alone by repeating over and over and over what happened in ALL the previous books so as soon as you see a reflection on the author's part of the characters doing this just skip to the next page and if exceptionally long winded two pages. This way you will not only not glaze over ,you will not miss a thing .
Read more
Helpful
Report abuse

Kindle Customer
5.0 out of 5 stars Excellent continuation and hints of what will follow.
Reviewed in the United States on June 1, 2021
Verified Purchase
There is a variety in life forms. The humans believe that earth is the originally location for their lives. There are a variety of other life forms that evolved on other planets in the great expanse of the universe. Each species varied in level of functions. Some are newly created, others have outlived theirs. The real understanding of life, cognitive functions, and ability to understand each other. The humans from earth expend great effort to survive and continue to accept or remove others.
This series has been fascinating to read. I anticipate further stories adding more diversity.
Read more
Helpful
Report abuse

David Thornton
5.0 out of 5 stars awesome book another homerun
Reviewed in the United States on March 31, 2020
Verified Purchase
This series just keeps getting better and better another can't put down book. Victory and her crew has become family and a awesome team. I can not wait for the next book and am looking forward to many more please keep up this incredible series sir.
Read more
3 people found this helpful
Helpful
Report abuse
See all reviews

Jimbo Gilmour
5.0 out of 5 stars Great read even if you have not read the previously written books
Reviewed in the United Kingdom on November 13, 2020
Verified Purchase
There is an opening chapter which puts the story of the main characters from previously published books in the.series.The prologue is for those who really know the past and how you it has become politically driven rather than military lead. Falcon the warship Victory has been damaged. captain Maddox owes his life to Galyon, Maddox must find something! To repair him out in the depths of beyond of space. So the mission with the old team back together.
Read more
Report abuse

Arockape
5.0 out of 5 stars Lost Starship Series
Reviewed in the United Kingdom on July 25, 2020
Verified Purchase
I found this whole series an enjoyable read with some real villains, misunderstood good guys and an whole lot of intrigue and double crossing. It would be great if this series were to continue. Capt Maddox surely has not finished his epic journey through space.
Read more
Report abuse

Aescalapius
5.0 out of 5 stars An excellent Space yarn
Reviewed in the United Kingdom on August 30, 2020
Verified Purchase
As usual, an excellent storyline with exciting peaks & troughs involving well-known characters, lead by Madox, & their strategies to accomplish, against all odds, the impossible. An easy-to-read page-turner that leaves you craving for more. The alien technology is also interesting. Generally a must for space sci-fi fans.
Read more
Report abuse

LooksUp
5.0 out of 5 stars Great series.
Reviewed in the United Kingdom on September 8, 2021
Verified Purchase
I'm enjoying this series. However, it is getting difficult to keep up with all these non-corporeal entities that show up and control characters.
Read more
Report abuse

Als
5.0 out of 5 stars Brilliant follow on
Reviewed in the United Kingdom on April 14, 2020
Verified Purchase
What a great series this is we must hear more of Victory’s crew as they protect the human races future
Read more
Report abuse
See all reviews
Back to top
Get to Know Us
Make Money with Us
Amazon Payment Products
Let Us Help You
EnglishChoose a language for shopping. United StatesChoose a country/region for shopping.
© 1996-2022, Amazon.com, Inc. or its affiliates