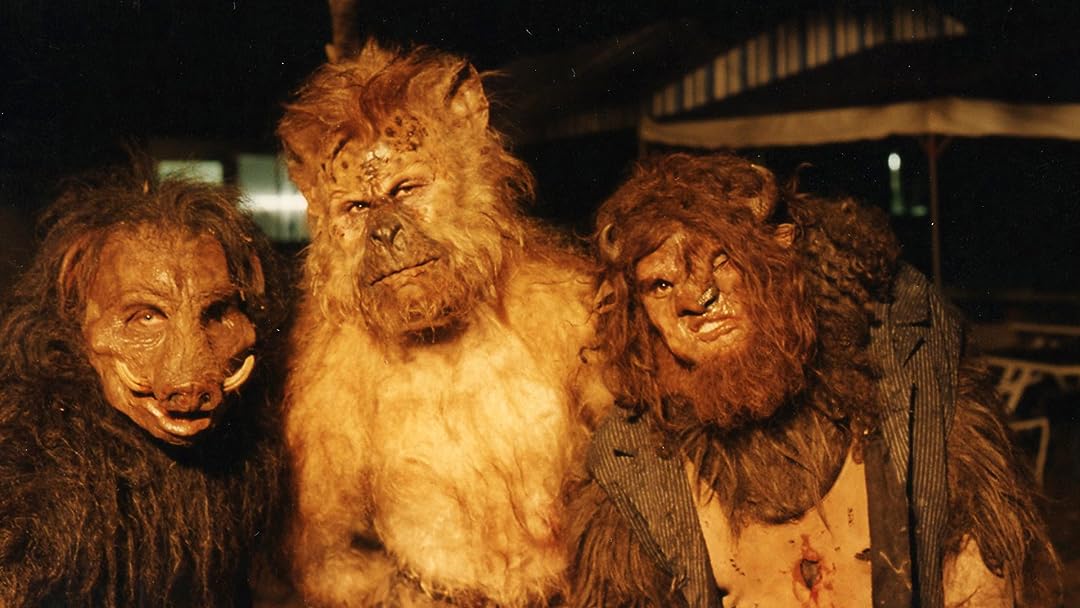 (208)
7.51 h 38 min201418+
The filming of the ill-fated 1996 version of H. G. Welles' The Island of Dr. Moreau is the stuff of legend. For the first time since he was unceremoniously escorted off his longtime dream project, Richard (Hardware) Stanley reveals in detail his spectacular original vision and how it was all ripped apart at the seams. Cast members including Fairuza Balk, Marco Hofschneider and Rob Morrow.

Greg ~ SDOReviewed in the United States on August 18, 2022
4.0 out of 5 stars
a deep dive into what might be the worst film adaptation of HG Wells work
Verified purchase
A great novel and a tragic film - i remember watching this decades ago,I recall it was aweful - this documentary helps explian the hard left this project took from one of passion and promise to one of the worst films ever adapted from a prominent literary work. Somewhere the Ghost of Brando smirks and HG Wells is revolted. It does appear that Val Kilmer the actual viillain.

Allen Garfield's #1 fan.Reviewed in the United States on March 13, 2020
5.0 out of 5 stars
Amazing! Would love to see a boxed set of this films director, David Gregory.
Verified purchase
Another great doc by David Gregory. His films include The Godfathers of Mondo, The Joe Spinell Story and dozens more. His upcoming Blood and Flesh: The Al Adamson Story is gonna be a doozy. Collectively, Gregory's films are must-see, nay, required viewing for all film freaks.

Lost Souls is by far the superior entry in the "doomed/troubled production" sub-genre. I'm including Hinckonlooper's Hearts of Darkness(Apocalypse Now) Terry Gilliam's Lost in La Mancha, and Jodorosky's Dune and other titles that elude me: one about a Orson Welles unfinished film and a Michael Cimino/Heaven's Gate doc - the titles ellude me.

Almost everyone involved in Dr Moreau participated (Frankenheimer, Brando are no longer with us), some were quite brave to participate: former New Line honcho, Bob Shaye, for example. Others like Val Kilmer wisely opted out - whatta jerk. Lots of footage, home video, film clips and stills. New Line graciously allowed the filmmakers the rights to everything, up to and including the finished film. (New !ine doesn't come across so well.)

On the other hand, the filmmakers play fair - all sides tell their version of events or at least their opinion. A viewer might reasonably walk away thinking that the "Suits" made the correct decision(s). David Gregory trusts his audiences intelligence and sense of fairness. Where you stand depends on where your head's at. Example: Marlon Brando, a-hole or comic genius? Both?

Seriously, there's stuff in this film you couldn't even make up. I wouldn't be surprised if a fictionalized H'wood version (i.e., The Disaster Artist) is in the works. Especially now that Richard Stanley has a recent hit, The Colors of Space - featuring a terrific Nicolas Cage performance...and other surprises.

Good to see that the immensely talented Stanley, who's previous films include the cult fave (and hit) Hardware is back, as the film lacks a bittersweet ending - a viewer is left (not unreasonably) that Stanley will never make another feature. Perhaps a future version will have a more upbeat epilogue.

Again, a boxed set of Gregory's incredible - and offbeat - docs would sell like the proverbial hotcake.

CaptainCoolReviewed in the United States on November 13, 2021
5.0 out of 5 stars
Genius documentary...
Verified purchase
the Dr Moreau episode of How Did This Get Made brought me here. i can't believe anyone legit would give this doc 1 or 2 stars...

this is by far the best, most interesting, fast moving documentary i have seen in a really long time. a doc or news report or book that tells the truth, especially about Hollywood innerworkings, is extremely rare...

Brando, Kilmer & Frankenheimer all seem like typical spoiled egocentric Hollywood sociopaths and they're mixed in with a sizable group of earnest blue collar hard-working cast and crew marooned out in the middle of Australian rainforest. this good vs bad setup and showdown are what most movies wish they had for conflict and drama.

come to think of it; forget the documentary classification, this is the best overall movie (a movie about a disastrous movie, lol) i've seen in years.
One person found this helpful

LorenGIIIReviewed in the United States on February 26, 2015
5.0 out of 5 stars
Every mutant dog has his day!
Verified purchase
The potential was there, like a half remembered dream, only to be shattered by the rude awakening of money hungry businessmen-- men whose sole pathetic vision was one of dollars and cents... And in the middle of greedy egotistical fools and saboteurs was a visionary filmmaker with a mission and a passion. Ripped asunder by cowards and hypocrites, Richard Stanley's Island Of Dr. Moreau would have been the greatest monster movie of the 1990s. Instead Val Kilmer and a few producers lost their minds and their guts and let a yes-man finish a dream by creating a nightmare, a parody of the savage epic Stanley would have made had anyone been behind him pushing him forward instead of into the mud. I watched this wonderful documentary envisioning what might have been... The pages of artwork and designs, the months and months of preparation, the visceral pace and tone of the original script, and the themes of erotic bestiality and surreal mutations designed to usher in a more primitive era of genre film... All gone and tragically nearly forgotten had it not been for Severin and Mr. Gregory's fantastic hunt for the truth. This documentary is a phenomenal look at the big budget Hollywood machine, more deadly than the M.A.R.K.13, and its feeble attempt to destroy the legacy of a classic scifi/fantasy/horror novel. The Island Of Dr. Moreau is a story that must be told with no filter, no limits, and Stanley surely is the man to do it. And there's still time for him, and rumors swirl that he may return in some form to this project once more, like a hybrid phoenix. I look forward to that day with hope, and an excitement i felt the moment this enlightening documentary ended. This story is not over!
10 people found this helpful

Todd GrovesReviewed in the United States on February 9, 2020
5.0 out of 5 stars
Excellent documentary on the insanity of the Hollywood movie macbine
Verified purchase
Whether you like or possibly understand Richard Stanley after seeing this documentary, I think it was one of the better documentaries on the making of a film I've ever seen. Aside from the particulars to the film being covered in this documentary, I feel it did an excellent job at conveying what it may be like working with - or trying to work with the "Hollywood movie machine".

Before watching this documentary, I happened to catch Richard Stanley's latest film, "Color Out of Space". An excellent horror film with Nicolas Cage, in a role I think he was made for. I had no knowledge of Richard Stanley before seeing "COofS" or this documentary. And despite some quirks, I have come to respect Stanley as a film maker. I'm glad he didn't completely give up on making films, to eventually make his latest. Which has received much critical claim. Personally, I wouldn't mind if Stanley went back and remade "Island of Dr. Moreau", assuming he was given the same control he had over "Color Out of Space". I'm betting it would be quite good.
One person found this helpful

User 0681Reviewed in the United States on March 1, 2021
2.0 out of 5 stars
Jump straight to the perfect summation by the excellent Fairuza Balk - 01:14:20
Verified purchase
I guess I kinda wanted to like this, and it appears it's really great for a lot of folks, but it's really not that great for at least some of us. First, the prime job of someone putting together a film like this is to paint people in their best light. About 90% of what Richard Spencer says I really don't want to hear - and that is 100% the fault of whoever clamped this together.

In case you forgot about this production totally (like me), yes it's that one Marlon Brando movie with the bright green foliage and bright white ceremonial robes. There's also apparently a ceremonial ice hat, which I now aspire to demanding from a crew of some kind before I leave this place.

One thing that saves things from being a totally unwatchable 2 hour slog is the absolutely lovely Fairuza Balk - that's B-A-L-K, big hi-five to whatever person typo'd that (The creator-gods of Gen X say you suck, lol). Speaking of her, the timestamp listed above is her rendition of Mr. Brando's take on the situation - it's all you need to know really, about 20 seconds of interview.

The rest could use some heavy critique, i.e. a hard spank by a run-of-the-mill, cold-blooded, soul-shredding movie producer - without whom at least half of all good movies would be completely unintelligible garbage. Sigh... This is long.

Also - you're totally gorgeous, Fairuza, if for some reason you happen to be reading this crap. My partner, who grew up in a barn in England somewhere, doesn't know who you are. I have shamed him mercilessly and may resort to violence.
2 people found this helpful

B. G. MeadowsReviewed in the United States on April 28, 2020
5.0 out of 5 stars
Karma caught up with Brando and Kilmer
Verified purchase
Both Brando and Kilmer shamelessly sabotaged Richard's move and ruined his career with their childish petulant egos.

It's extremely difficult to fault Richard Stanley--a young and promising director--for being star-struck by Brando and thrilled that he wanted to star in Richard's film. Sadly, that was the beginning of the end for "The Island of Dr. Moreau." Admittedly, Brando's hubris and "mind games" could be overlooked because he had won an Oscar and had a long list of A-List films. But, Kilmer's appalling behavior was totally inexcusable.Kilmer was typical of a mediocrity trying to mask his insecurities by being a bully.

In the end, Brando ended up a morbidly obese recluse, while Kilmer's career quickly evanesced and he got throat cancer from smoking.

Richard probably could have made a commercially viable and entertaining B-film had he had the insight to realize that Brando was the kiss of death.
11 people found this helpful

DafReviewed in the United States on August 26, 2021
5.0 out of 5 stars
Just as enjoyable (maybe more so?) if you've never seen the film in question
Verified purchase
Wasn't sure what I was in for at first, but I knew I was going to have a good time early on with this post-mortem on "The Island of Dr. Moreau" when it described how someone had literally put a voodoo curse on the ill-fated movie. It just gets better from there, and will astonish even the most insatiable gossip hounds as the production eventually devolves into something resembling Lord of the Flies. Ever see a multiple-breasted pig-woman gleefully smoking a joint? You will.
2 people found this helpful
See all reviews
Back to top
Get to Know Us
Make Money with Us
Amazon Payment Products
Let Us Help You
EnglishChoose a language for shopping. United StatesChoose a country/region for shopping.
© 1996-2022, Amazon.com, Inc. or its affiliates