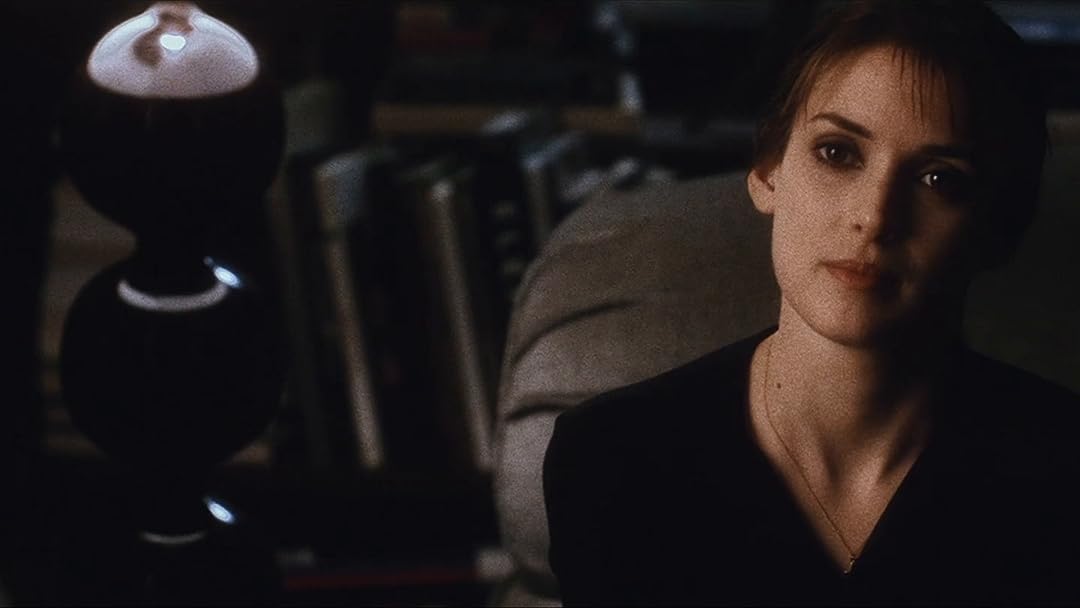 (460)
1 h 37 min2000R
Devout Catholic woman who belongs to group of priests & lay people that conducts exorcisms & had self been a victim.

Ordo DagonReviewed in the United States on May 12, 2019
5.0 out of 5 stars
If You're Really Into The Antichrist
Verified purchase
This film actually gives you some factual data on the career path of the man chosen to be the last Antichrist, Donny Bennett. Someone did their research. I consider this film even better than The Omen trilogy. Ryder does an excellent job as being a retractor and Chaplan plays his role as well.
2 people found this helpful

Thomas M. SiposReviewed in the United States on May 13, 2005
5.0 out of 5 stars
A masterpiece; the Blade Runner of horror
Verified purchase
You like those dotcom commercials? The ones with sped up herky-jerky motion, and cool electro-bright colors? Or those Mercedes-Benz TV ads, with the sudden flashes of white intercutting sepia-toned shots of cars careening amidst a starkly cold environment? How about "coming of the Antichrist/Armageddon" films? Can't get enough of those?

Even wanna see an Antichrist film featuring the visuals of a dotcom commercial? Now's your chance!

This is no putdown. Storywise and stylistically, Lost Souls breathes new vibrant life into Revelations. No mean feat, considering the oh-so-many times horror (and other genres) have retold the familiar tale of the End Of Times.

Lost Souls retells the Revelation mythos from the perspective of a reluctant Antichrist. Peter Kelso (Ben Chaplin) is an atheist and best-selling author, slowly convinced by Maya (Winona Ryder) that on his 33rd birthday his body will be "taken over" by Satan. At which moment Peter will "cease to exist." (This slow self-awareness of one's own divine mission mirrors that of Christ in The Last Temptation of Christ -- although, in this case, Peter will no longer be "Peter.")

Online discussion indicates that horror fandom's opinion of Lost Souls is sharply divided. The controversy includes the story (especially its "small" ending), but is primarily directed at the film's visuals.

Regarding the story: One fan praised the film for its provocative questioning of the nature of religion, God, and Satan. I disagree that it does that, although I join the film's admirers. Lost Souls's perspective is intriguing, but not subversive. Its fundamental story is rigidly faithful to Revelations. God is all-good and all-powerful. Satan is evil, the Great Deceiver. Man (or woman, i.e., Maya) can defeat Satan with sufficient Faith in Christ.

About that "small" ending. Many viewers have a problem with it. How does one end an Antichrist film? If one's expectations derive from The Omen trilogy, The Omega Code, The Devil's Advocate, The Seventh Sign, or The Visitor, one may expect impending Armageddon. Thunder and lightning, natural disasters and military battles, eardrum-shattering music and sound effects, even melting faces and flocks of doves. But director Janusz Kaminski thwarts our expectations. His ending is unexpectedly "small." A rising buildup to ... an abrupt whimper, not a bang.

His ending is deceptively anticlimactic.

Give it time. It'll linger in your thoughts, and grow. An ending that's dark and moody and somber, one that you'll still be contemplating the next day. More so than when you saw it.

Warning: Don't return the video immediately after viewing it. Not unless you must. You'll want to see Lost Souls again, the very next day.

Second warning: Lost Souls is best seen alone, in the dark. I, unfortunately, saw it with a friend. She kept interrupting, asking questions, making comments. Lost Souls has atmosphere, pace, rhythm. A bright room with loud viewers will dampen its impact. And although it has an extremely well-structured script (I saw some things coming, which is not bad), it's not a simple script. If you don't pay attention, you'll soon find the succession of events confusing.

About its atmosphere. The controversy over Lost Souls pertains less to its story than to its style, which threatens (but does not) overwhelm the story. Although Lost Souls is Kaminksi's directorial debut, he's long been a leading cinematographer (his credits include any number of Spielberg films, including Saving Private Ryan and Schindler's List).

Some critics contend that Kaminksi has gone overboard in displaying his visual tricks. The film has the look of a TV commercial. White flashes punctuated by thunder, movements jarringly sped up (as though shot on video and transferred to film), a sepia-saturated world of grays, browns, and golds. A world simultaneously bright yet murky. Cold and pale. The metallic look of The Matrix, or a Wired magazine ad, or a dotcom commercial.

Early in the film, three priests (one, the elderly John Hurt) and Maya enter an asylum to perform an exorcism. They stride single file, slow-motion, their long steps exaggerated with a wide-angle lens, their loose clothes billowing (reminiscent of The Matrix's trenchcoats), their feet thundering with every step. Appearing as four futuristic tough-guys approaching a duel; yet this curious mise-en-scene is here applied to three physically unimpressive priests, and one slight, frazzled woman.

This contrast between style and content risks satire; yet Kaminski intends no satire, and to his credit, we're not laughing.

Equally visually stunning is a late scene, shot in telephoto: an SUV driving under a bridge, under the fiery semicircular rings of ... some sort of Men-At-Work light fixtures, a looming electronic sign reading: No Access.

Do these stylistics serve an aesthetic purpose? One can find one. Kaminski's dark, somber cinematography creates the impression of a world under a cloud (it's often raining), of an impending doom descending on humanity. The characters' jarring motions adumbrate the metaphysical and ethical disintegrations inherent in Armageddon. The thundering footsteps shot in slow motion emphasize the import of the impending confrontation. And of course, the impressive stylistics and special effects build to provide that much more contrast with the unexpectedly "small" ending.

So yes, one can aesthetically justify Kaminski's stylistics. But one is also tempted to wonder: Are these justifications the real reason for his stylistics, or did Kaminski apply them simply because they looked cool? Certainly, the film's detractors think so.

Yet, Kaminksi's stylistics work for me. And although they threaten to overwhelm the story, they do not do so. Especially when Kaminski mutes the stylistics near the end, shifting emphasis to the story.

Normally, horror works best on a low-budget; Lost Souls is an example of a big budget put to good use. A low budget couldn't deliver Kaminski's visuals.

Despite its stylistics and controversy, Lost Souls's story and structure is traditional. Maya and her priestly allies have determined that Peter is the coming Antichrist, and they must stop him. Either by working with him, or if need be, against him. Contrast that with a nontraditional (and smallish) Antichrist film: Hal Hartley's The Book of Life (1998).

But unlike Lost Souls, The Book of Life also has a reluctant Jesus. God is the heavy, distant and cruel, because He seeks to destroy Earth through Armageddon. Jesus wishes to avert Armageddon, for humanity's sake. The Antichrist shares Jesus' goals, preferring to keep things just as they are. Together, Christ and Antichrist plot to subvert God's plans for Armageddon.

Lost Souls proffers no such theological ambivalence. Maya is wholly committed to God, her Faith strong. Through Faith in her Catholicism, she is able to ferret out Satan, recognizing his lies in the possession of a priest.

Surprisingly, Meg Ryan is credited as one of Lost Souls's producers. She does not appear in the film, so it seems she's a genuine producer here, rather than an actress using her clout to assume the title. With Lost Souls, Ryan has reason to be proud.

I predict that Lost Souls will be the Blade Runner of horror. Blade Runner was a critical and box office bomb upon release, condemned for its "style over substance," yet slowly it built a cult following, becoming one of the most admired and influential science fiction films in history.

SasquatchReviewed in the United States on July 22, 2014
4.0 out of 5 stars
A different kind of exorcist movie
Verified purchase
I really liked this movie. It is not your typical exorcist movie because it seems to deal with the subject of evil more than reliance on special effects. The direction is excellent, with some remarkable outdoor shots of the city at different angles and the use of slow motion in some scenes. It is more of a suspense thriller to me than a horror movie. Winona Ryder gives a serious performance and John Hurt holds his ground as long as he can, as the priest fighting the spiritual war against Satan. Worth watching.
4 people found this helpful

JRSReviewed in the United States on November 17, 2001
4.0 out of 5 stars
Good but...... I don't know.....
Verified purchase
Good Movie...... but I don't know. The story line was great but it just seemed like...... the movie had its intense parts but they should have built more off of them. There was alot of talk and it had a great story line but they should have included more shocking scenes..... although it did have its share. So if you are looking for a good scary movie with not that much scary viewable content but more of a scary storyline then get this movie. You won't regret it. I just like more gore :-P
One person found this helpful

Anthony K.Reviewed in the United States on December 23, 2012
5.0 out of 5 stars
Hunt for the Devil!
Verified purchase
The hunt is on for the Devil incarnate on Earth! And a formerly possessed girl reads the signs during an incomplete excorsism to realize that the devil is coming to earth within the unsuspecting body of a writer, whose associations around him for years has been grooming him to be the devil's earthly form. Very spooky and dark with a very grim ending. Very good supernatural thriller and very recommended! Get it now!
2 people found this helpful

Mat Van GoghReviewed in the United States on March 8, 2013
2.0 out of 5 stars
ok but not great
Verified purchase
Although its an interesting premise This could have been much better than it was

I gotta say they did alot with the DVD. shame they didnt make the movie better..
it comes off as a 2nd rate poor excuse for the Omen

If anyone has any questions about this please don't be afraid to ask me. I'd be more than happy to answer any and all of them.

DisneyCrazedReviewed in the United States on February 18, 2021
3.0 out of 5 stars
Meh
Verified purchase
Could have been better. Predictable and not very interesting.
See all reviews
Back to top
Get to Know Us
Make Money with Us
Amazon Payment Products
Let Us Help You
EnglishChoose a language for shopping. United StatesChoose a country/region for shopping.
© 1996-2022, Amazon.com, Inc. or its affiliates